The Physics of Life

The Physics of Life is the new book by of one of my old professors Dr. Adrian Bejan.  He has developed the Constructal Law that is concerned with flowing systems, or in another sense living systems; living because there is movement. The law is thus formulated that, “for a finite-size flow system to persist in time (to survive) its configuration must evolve (morph) in time in such a way that it provides easier flow access.” On this single basis, he is able to show precisely how and why the complex geometric patterns occur in nature. “The Constructal Law is predictive: It teaches us how to discover the drawing and how to predict the evolution—the morphing—of the natural design over time.” In this book, subtitled “The Evolution of Everything,” he expands his analysis from the inanimate to, as the subtitle states, to finding patterns for everything; or almost. Thus there are discussions of sports, engineering design, government, language… and I would say philosophy, though implicitly. On several levels, I believe this book could be of interest to LRC readers.

Perhaps the most important passage in the book for libertarians explains “how freedom is the most basic and most overlooked property of nature and thermodynamics for that matter. Every natural entity has the freedom to change. Freedom means the ability of a flow configuration to change, morph, evolve, spread and retreat. This is the property that makes natural organization possible. Without the freedom to change, organization and evolution 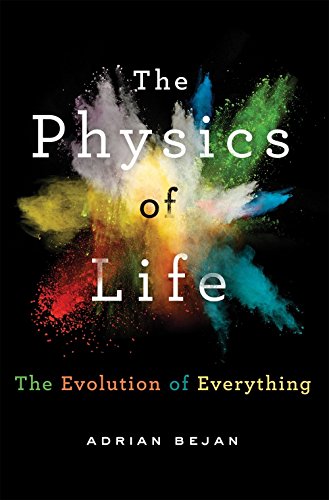 cannot happen. Social organization, civilization, and culture are the best-known evolutionary phenomena that illustrate the natural tendency to change freely, to evolve. To improve a design while loading it with constraints disguised as good ideas is nonsense.” However, soon after he strikes a false chord in my opinion by stating “Government is a complex of rules that act as channels … Without these channels, we would be stuck…” More accurately, it is society or culture that are the channels, the government is truck the mud that makes society stuck.

Furthermore, Bejan’s concept of societal flow is not new to some libertarians, “In nature nothing moves unless it is driven….” For example, LRC’s Butler Schaffer has written (in The Wizards of Ozymandias) of the need for flow, “The health of any system – be it an individual or a society – depends on the production of those values necessary for that system’s survival. The production and distribution of goods and services, technology, the sciences, medicine, the arts, and agriculture, are just a few of the more prominent examples of the values upon which Western societies have depended on .”  But also reflected is the not so libertarian theme of Thomas Aquinas, who certainly would have understood the philosophy of Bejan implicit “In nature nothing moves unless it is driven….” For Aquinas, everything that moves is moved by another, there must thereby exist an Unmoved Mover (i.e., God).

In a list of examples for the positive evolutionary developments in different fields, Bejan includes “– from economics narrative to economics with mathematics (Samuelson).” From an Austrian economics point of view, this is an unforgivable sin (quoting Paul Samuelson of all people!).  For me, one of the most fundamental and critical teachings of Mises concerns the application of mathematics to the social sciences including economics.

In the sphere of human action there are no constant relations between any factors. There is consequently no measurement and no quantification possible. All measurable magnitudes that the sciences of human action encounter are quantities of the environment in which man lives and acts. They are historical facts, e.g., facts of economic or of military history, and are to be clearly distinguished from the problems with which the theoretical science of action praxeology and especially also its most developed part, economics—deals.

We might even say that to be human is to have behavior that is not fixed by constants…or to have free will.

But I will leave the door open for new evidence. Bejan is very good on hierarchy for which he finds that it is normal for flowing inanimate systems as well as moving human systems. Furthermore, this is not only natural but also that “The hierarchy of the whole is good for every moving individual.”  Gary North writes a lot about Pareto’s Law (curve), in that “economic inequality has not increased since at least 1897 — the year that Vilfredo Pareto published his discovery: about 20% of the people in every European nation he studied owned about 80% of the wealth. . . . The reformers just do not get it: the Pareto pyramid is found everywhere, no matter which reform group won the most recent reform. . . . This does not just apply to wealth. It applies across the board in an institution after institution. No one knows why, but it does. . . . It really is a shame that no one can explain it.” (emphasis by North)  So do human constants exist, contra Mises?  Could the Constructal Law explain the Pareto power law ratio?  I would suggest a line of investigation that searches for the critical size of organizations such as bureaucratic governments and corporations where there is the need for controls on the flow of information and wealth. Perhaps in this short history since Pareto, there is on average, say one manager per four workers; from this fundamental unit the power law pyramid could be built. But as per Mises, it is history, and for many reasons, in different times and places, it does not hold.

The Physics of Life will make you think even if your response to a particular point is to disagree with the results of the analysis. I highly recommend this engaging book for all those who search for an understanding of the world at a high level, but without excessive jargon or mathematics.

Previous article by Ira Katz: My Investment in Heaven