Most people believe that the era we live in is totally normal. This is the case whether you live in a war-zone or in “Shangri-La”. It is the same with the economy. Everybody in the West today believes that stocks always go up and that property grows to the sky and that government bonds are the safest investment you can own. So these strong markets have been the norm for the average investor for the last 100 years. Everything they touch has gone up and any down move is only a correction. And so far investors have been right to stay in the market. Anyone who sat on a diversified portfolio of stocks, property, and some bonds has made a massive fortune in the last hundred years. Very few skills in picking the investments were required. It was enough to buy high-quality investments and just sit on them.

Yes, there have been scary moments like for anyone who bought stocks when the Dow was at 400 in 1929. By 1932 the investor had lost 90% and felt very poor. But 24 years later he was breaking even and today, his heirs would own stocks that have achieved a handsome return of 4,400%. Anyone who was clever enough to put $10,000 in the Dow at the 1932 bottom would today sit on a $4.5 million fortune. Hindsight is, of course, the most exact of all sciences. But the point I am making is that we have seen 100 years of investment markets when no skill was required, just staying power and patience.

Most investors have the opinion that it is their skills that is creating the high returns. In the late 1990s for example, every single person was an expert in the Nasdaq and internet stocks. That is until they lost 80-100% in the early 2000s. At that point, all the self-made experts vanished completely. The majority of people have got no idea that their gains in all asset markets have very little to do with investment skills but instead all to do with the extraordinary generosity of governments and central banks. Because the creation of the Fed in 1913, started a fool-proof method of making money especially for the bankers. And the Fed was a creation by private bankers for the benefit of private bankers and major investors. As Mayer Amshel Rothschild said: “Give me control of a nation’s money and I care not who makes its laws”.

So in 1913, an absolutely extraordinary period of 100 years started that has led to a total explosion in most asset classes, population numbers, inflation and credit growth as well as medicine and science including some amazing technical innovations and developments. There is of course nothing wrong with rapid growth. But when it becomes exponential and relates to a bigger sample like the world or a major continent, the likelihood is that it won’t last and that there will a substantial move in the opposite direction.

World population to decline by billions?

Let’s take the example of population growth. For almost 12,000 years, global population grew gradually to reach 1.2 billion people in 1850. It then reached 1.4 billion at the turn of the 1900s. But since then, as shown in the graph below, there has been an absolute explosion to 7.4 billion currently. 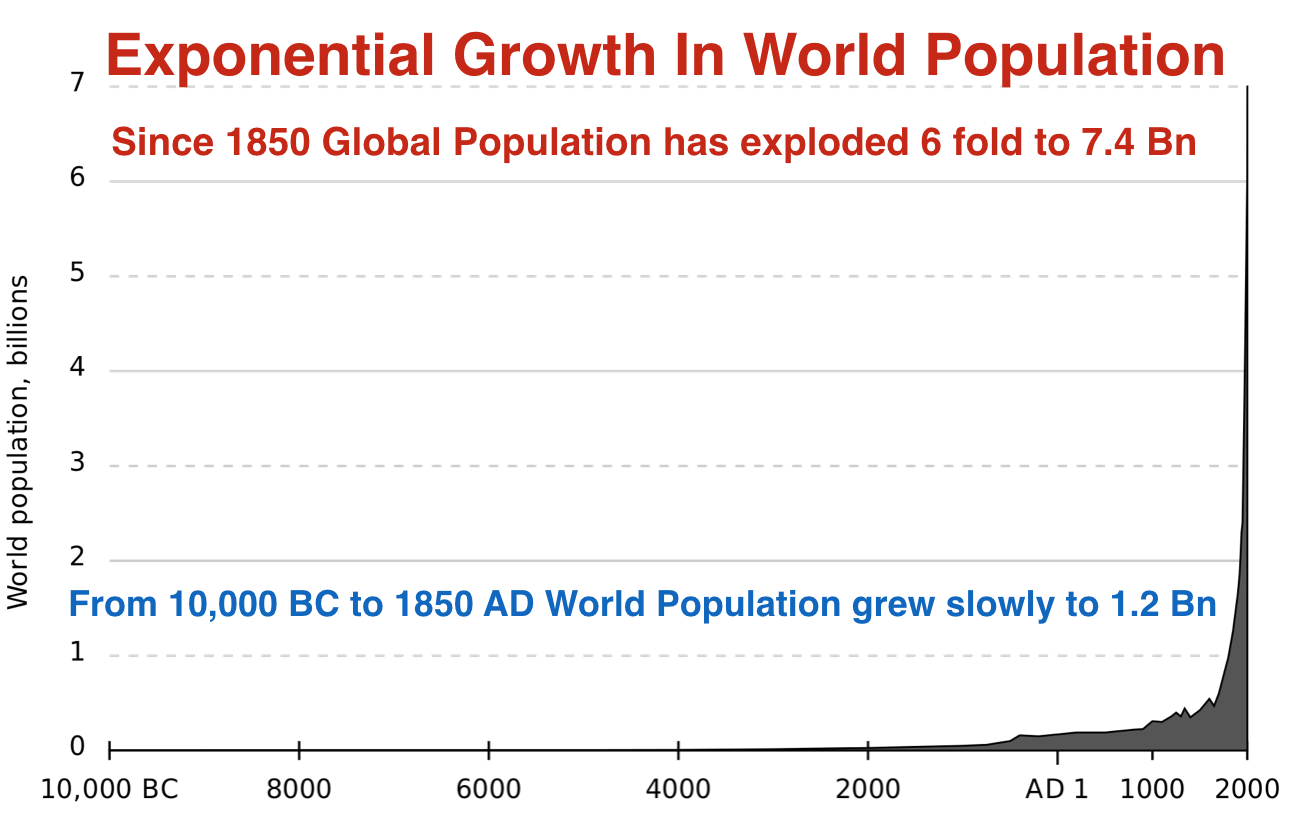 Prosperity, food, and improvement in medical science have all contributed to this exponential growth. Experts are now forecasting that global population will double to 15 billion by 2100. This is in my view very unlikely. If we look at the 100-year spike on the graph, that is likely to end abruptly at some point. Yes, the population can continue to grow for a number of years but spikes or exponential growth never continues straight up and doesn’t just pause with a sideways move. Instead, a spike move will eventually result in a spike in the other direction. So at some point world population will come down by say 30-50%. This sounds implausible today, but remember that throughout history there have been events that have resulted in a major reduction of humans on earth. Take the Black Death in the mid-1300s. It is estimated that up to 40-60% of Europe’s population were killed and maybe as many as 200 million worldwide. The disease is only one way which can reduce the population. War and economic depression could also have serious implications on the size of the population. A nuclear war could be totally devastating and the collapse of the financial system would lead to famine. I am not forecasting these events, but the probability is major that one or several of these disasters will happen at some point in the future.

Lock It Up, Burn It Down, Blame the Ranchers Measuring the Cost of the VW ‘Cheating’ Scandal