Bloomberg Markets on the Return of the Gold Standard

A recent article in Bloomberg Markets by Michelle Jamrisko brings welcome news. “The gold standard is one of the oldest ideas about money, but the hardest of hard-money hawks sense an opening to breathe new life into it.” Unfortunately, those in search of information about the gold standard and its supporters will find little of use in the article.

Most obviously, the article omits one item of no slight significance. It never explains what the gold standard is. The closest the article comes to an explanation is this: “Decades ago, the amount of cash circulating in a country was often limited by the stash of bullion held in its coffers.” According to this account, under a gold standard, the government cannot issue an unlimited amount of money: its ability to create money is limited by the amount of gold on hand. Shortly after, Jamrisko says, “Of course, full restoration of the system that reigned in the U.S. for a century through the 1970s is almost inconceivable.” By her reference to “the 1970s”, it’s apparent that she is talking about the arrangement in place until Nixon closed the “gold window” in 1971. 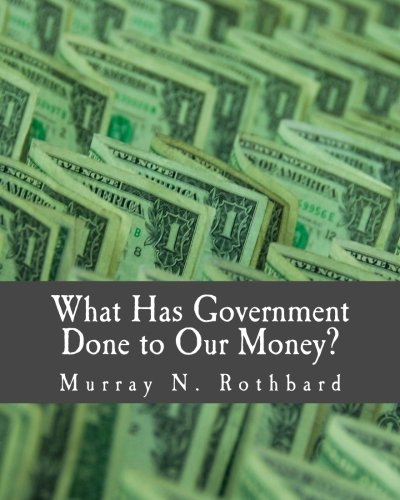 I hesitate to shock Michelle Jamrisko, but that system was not the “gold standard” that today’s “hardest of hard-money hawks” want to restore.  In What Has Government Done to Our Money?, Murray Rothbard, a foremost defender of the gold standard, characterized it in this way: “The total stock, or supply, of money in society at any one time, is the total weight of the existing money-stuff. Let us assume, for the time being, that only one commodity is established on the free market as money. Let us further assume that gold is that commodity (although we could have taken silver, or even iron; it is up to the market, and not to us, to decide the best commodity to use as money). Since money is gold, the total supply of money is the total weight of gold existing in society.”

And where is Ron Paul? Jamrisko does mention him. She says, “Those targeting it [the Fed] include the ‘Audit the Fed’ movement led by Kentucky Senator Rand Paul, whose father Ron Paul has been a standard-bearer for gold.” She does not think it relevant to inform her readers that Ron Paul has for decades been the leading public advocate of the gold standard and that in End the Fed and a vast number of other books, articles, and speeches, he has called for the Fed’s abolition.

Jamrisko quotes without comment a critic of the gold standard. “The gold standard ‘was awful. It was horrific,’ said Tony Fratto, a former Treasury and White House official in the George W. Bush administration. ‘It led to some of the worst economic downturns and bouts of deflation in history.’” Probably what Fratto has in mind is that some economists such as Barry Eichengreen attribute the severity of the worldwide Great Depression in the 1930s to reluctance to quit the gold standard.

But this view, even if it is correct, it not an objection to the genuine gold standard. The economy in the 1920s and 30s operated under the gold exchange standard, not the classical gold standard; and this was the source of the trouble. The gold exchange standard, which did not require each nation to have a gold-backed currency, was again and again condemned as one of the greatest crimes in history by the great French economist and bank official Jacques Rueff, one of the most stalwart defenders of the classical gold standard.

Further, why is deflation bad? As Rothbard noted, “Few occurrences have been more dreaded and reviled in the ‘history of economic thought than deflation. Even as perceptive a hard money theorist as Ricardo was unduly leery of deflation, and a positive phobia about falling prices has been central to both Keynesian and monetarist thought. . . Price deflation on the free market has been a particular victim of deflation-phobia, blamed for depression, contraction in business activity, and unemployment. There are three possible causes for such deflation. In the first place, increased productivity and supply of goods will tend to lower prices on the free market. And this indeed is the general record of the Industrial Revolution in the West since the mid-eighteenth century. But rather than a problem to be dreaded and combatted, falling prices through increased production is a wonderful long-run tendency of untrammeled capitalism.”

Jamrisko might disagree, but she ought to have taken account of Rothbard and his followers  rather than dismiss them without mention.

Previous article by David Gordon: Why Do Antiwar Movements Fail?