The Last Full Measure of Misery: When Will Prohibition Finally End?

“Our safety and happiness lie in obedience to law by every man, woman, and child,” pontificated Attorney General Harry Micajah Daugherty in his keynote address to the 1921 annual conference of the American Bar Association in Cincinnati. His homily on the supposed virtue of submission to the state was offered in the service of the crusade to “suppress the age-long evil of the liquor traffic,” a holy errand to which the assembled legal luminaries were firmly committed, at least while they were on the clock.

“After hours,” Edward Behr wryly observed in his book Prohibition: Thirteen Years that Changed America, “many of those attending the meeting were haunting the speakeasies they denounced.”

Everyone in Daugherty’s audience was aware that the Attorney General was profiting handsomely from the kickbacks and other illicit emoluments that inevitably accompany prohibition. Most of them were likewise aware that Daugherty had selected Cincinnati as the site of the conference because its police and municipal court system were entirely controlled by bootlegger George Remus – who was among the Attorney General’s most generous benefactors. 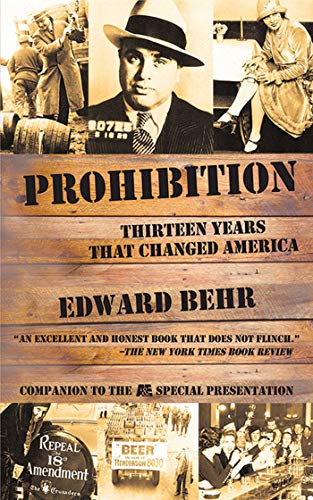 In order for the “Noble Experiment” to proceed, certain “needful lies” had to be recited by people in positions of “authority” – the most significant of which was that the state’s enforcement caste was essentially incorruptible, and thus suited to the task of reforming lesser beings through the application of violence.

Allowing that some decent people opposed the 18th Amendment and the quasi-totalitarian enforcement scheme it spawned, Daugherty insisted that once “public sentiment has crystallized into law there can be no question as to the duty of good citizens. They can still debate as to the wisdom of the law, but there is only one course of conduct and that is obedience to the law while it exists.”

In the service of a “law” that was routinely violated by those who enforced it, hundreds of thousands of lives would be changed dramatically for the worse – many of them ruined beyond repair. Thousands of people would die through violence either inflicted by agents of the state, or abetted by state policies that gave criminals a monopoly on what had previously been a competitive market.

An estimated 10,000 Americans – more than three times the death toll on 9/11 — were killed in chemical warfare waged by the Prohibition Bureau in what can only be called a campaign of state terrorism. Historian Deborah Blum recounts that the federal government outraged that Americans persisted in consuming something their betters had banned, “ordered the poisoning of industrial alcohols manufactured in the United States, produces regularly stolen by bootleggers and resold as drinkable spirits. The idea was to scare people into giving up illicit drinking.” (Emphasis added.)

This facet of the “Noble Experiment” is sometimes called “The Chemist’s War,” and it prefigured the short-lived federal program of the 1970s in which the DEA –working in the company of brow-beaten locals — sprayed the toxic herbicide Paraquat on Mexican marijuana fields. Suicidal impulses are among the documented effects of Paraquat poisoning. The sociopathic figures responsible for that plan reasoned that “if some citizens ended up poisoned, well, they’d brought it on themselves,” Blum recalled.

The harm is done by government initiatives –which invariably involve aggressive violence — always outweighs any benefits that some might derive from them. Prohibition, however, may be uniquely devoid of any moral benefit.

Summarizing the accomplishments wrought through the “Noble Experiment” after it came to an end in 1933, the immortal H.L. Mencken observed that although it had consumed less than thirteen years (about the same lifespan enjoyed by Hitler’s Reich, interestingly), “It seemed almost a geologic epoch while it was going on, and the human suffering it entailed must have been a fair match for that of the Black Death or the Thirty Years War.”

The death toll of Prohibition was a few zeroes short of justifying such comparisons, but given the concentrated viciousness exhibited by a government that would poison its subject population in the name of moral uplift, Mencken’s hyperbole is excusable. With characteristic insight he pointed out that there was one entirely unintended healthy consequence of the campaign: It disabused the public of the notion that police are noble protectors of property and virtue.

Owing to the ubiquitous corruption and abusiveness of law enforcement officers at every level of government, the public was no longer astonished “when police were taken in evil-doing,” wrote Mencken before the 18th Amendment was repealed. Prohibition enforcement officers, a “corps of undistinguished scoundrels with badges,” propagated misery without redemptive purpose, leaving in their wake a population disenthralled from the notion of unqualified submission to those who embodied “authority.”

This would change, regrettably, with the compound crises of the Depression and World War II, and the prohibitionist impulse would re-emerge as the War on Drugs.

To carry out the jihad against alcohol consumption, the federal government had to amend the Constitution. The War on Drugs has been carried out without the benefit of a similar amendment, a choice that displays a commendable lack of hypocrisy. If this were a republic by any reasonable definition, the government wouldn’t assert a claim of ownership over the people from whose consent it supposedly obtains its legitimacy. The belief that we are the property of the government is the only rational basis for pretending that the government can dictate what we consume.

If the Regime has the authority to regulate the content of the individual’s bloodstream, the individual has no right to bodily integrity. Pennsylvania resident Kimberlee Rae Carbone is one of many subjects of the Soyuz who can attest to the truth of that principle.

On November 3, 2013, a police officer attached to the Lawrence County Drug Task Force saw a man named Jason Monette, a friend of Miss Carbone, briefly enter an apartment building in New Castle and then sit in the passenger seat of Carbone’s automobile. This behavior can only be deemed “suspicious” in a literal police state, which – to be brutally candid – is the best description of what we have allowed our country to become.

The officer conducted a pretext traffic stop, pretending that Carbone had failed to activate her turn signal within 100 feet of an intersection. As he did so, the officer contacted District Attorney Joshua Lamancusa, who arrived on the scene and began interrogating Carbone and her passenger about drug possession. Carbone provided the information the State demands of drivers and then invoked her right to refrain from answering further questions.

Carbone’s insistence on asserting her rights prompted the officer to claim – falsely; he’s a police officer, which means that lying for him is an autonomous reflex – that he smelled marijuana. She was arrested for suspicion of DUI, although no field sobriety test was performed.

Over the next five hours, Carbone endured what can only be described as a protracted episode of sexual molestation supervised by Lamancusa. She was subjected to a pat-down search at the scene of the unlawful traffic stop, then repeatedly subjected to invasive body cavity searches at the Lawrence County Correctional Center. When no evidence of contraband was found, Lamancusa instructed the officers to take the victim to nearby Jameson Hospital, on the pretense of treating her for “a possible overdose, rectal packing and/or oral intake of a controlled substance.”

Carbone, the patient-cum-hostage, withheld consent for “treatment.” She was shackled to a bed while a male physician, Dr. Bernard Geiser, repeatedly violated her genital and emunctory orifices. As she was being molested, Carbone’s agony was amplified by the derogatory comments of officers in the room, and the smug, sadistic taunts of Lamancusa, who asked her if “she knew what prison felt like” and said that the assault would end if she agreed to become an informant.

Lamancusa’s vita, significantly, lists him as the head of the Lawrence County Sexual Assault Task Force. On the evidence offered by his treatment of Carbone, the purpose of that unit is to commit sexual assault, rather than investigate and punish that crime. It’s also worth noting that he is a former JAG officer in the U.S. Navy. If he had inflicted the same treatment on a POW that he had administered to Carbone, Lamancusa would be occupying a cell at Ft. Leavenworth.

Carbone filed suit last November against the Lawrence County, the City of New Castle, half-dozen police officers, two doctors, and DA Lamancusa. US District Judge Terrance McVerry has dismissed several claims in the lawsuit – including one of false imprisonment – because what was done to the victim is not considered extraordinary, let alone shocking to the conscience of the court. Given that roadside abduction and sexual torture are common tactics in the Drug War, Judge McVerry is correct, in a strictly positivist sense.

Most of the claims against Lamancusa were dismissed because of a perverse Pennsylvania state doctrine called “high public official” immunity, under which he cannot be held civilly accountable for “all conduct … within the course of the official’s duties.” This apparently includes sexual torture of an innocent woman.

Judge McVerry did find merit in Carbone’s argument that Lamancusa and his rape gang engaged in a conspiracy to violate her rights under the 4th and 14th Amendments. In doing so, however, he has narrowed the ground so radically that the best outcome the victim can expect would be a subsidized settlement that would leave the malefactors in place to commit similar outrages against other innocent people.

Lamancusa is already a repeat offender. About two weeks after he presided over the molestation of a weeping woman – who required both physical and psychological treatment following her ordeal – the DA was sued by John LaTour, owner of a tobacco shop in Ellwood City. In August 2012, Lamancusa staged a televised “drug bust” at Ellwood’s business, My House Tobacco, on the basis of a single unsubstantiated claim that a local resident had purchased “synthetic drugs” at the shop.

With cameras in tow and flanked by police, Lamancusa barged into LaTour’s business and confiscated eighty percent of the inventory. LaTour’s crime was selling a product called Burney Incense, which was legal at the time but has since been banned by the sanctified specimens who inhabit the state legislature. LaTour had lab reports documenting that the incense was free of any proscribed substances. He also offered to provide samples of the product to be tested by the task force.

Lamancusa wouldn’t settle for anything less than the redemptive violence of a televised, state-licensed armed robbery. When Lamancusa, a zealot in the prohibitionist cause, was elected in 2010, he had promised – the term “threatened” would be more apt – to expand drug enforcement and fund it through expanded property seizures, so he was indifferent to the question of whether LaTour had actually committed an offense.

No time would be spent examining the evidence, and no effort would be made to follow due process: There was property to steal, a business to wreck, and lives to ruin for the greater glory of the State. Such was the attitude of Daugherty and his underlings a century ago, and so it is with his contemporary successors.

At some point, drug prohibition will end. Who will be the last person killed, maimed, molested, or ruined in the name of that iniquitous enterprise?

Previous article by William Norman Grigg: The Scouring of the Shire