Heartburn Can Be Easily Eliminated Without Hazardous, Habit Forming Drugs

An estimated 15 to 20 million1,2 Americans use acid inhibiting drugs to treat heartburn. Indeed, PPIs are among the most widely prescribed drugs today, with annual sales of about $14 billion.3 This despite the fact that they were never intended to treat heartburn in the first place.

Research clearly shows that proton pump inhibitors (PPIs) are severely overprescribed and misused, and do far more harm than good in the long run.4,5,6,7,8,9

If you suffer from frequent heartburn, rest assured there are many alternative treatment strategies that will help you eliminate this problem without serious side effects, which I’ll review toward the end of this article.

Beware: PPIs Are NOT Advisable for Majority of Heartburn Cases

Proton pump inhibitors like Nexium, Prilosec and Prevacid are actually designed to treat a very limited range of severe problems,10 including:

These drugs were never intended for people with heartburn, and 90 to 95 percent of people taking them are not good candidates for these drugs. PPIs should also only be taken for a short period of time, yet many continue to take them for months or years on end.

PPIs Can Be Habit Forming and Dangerous

It’s important to realize that if you’re taking a PPI drug to treat your heartburn, you’re treating the symptom only; you’re not addressing the underlying cause, and by doing so, you’re exposing yourself to additional and potentially more dangerous health problems.

PPIs suppress the production of stomach acid, and contrary to popular belief, most cases of heartburn are actually due to having too little acid in your stomach, not too much. So taking a PPI will actually worsen your condition since stomach acid helps digest food protect against ingested pathogens.

Lack of stomach acid makes you more vulnerable to a number of problems, including nutritional deficiencies, food poisoning, and digestive system infections such as clostridium difficile.

Moreover, if you try to quit them cold turkey, your symptoms typically return with a vengeance. As noted by Marcella Lafayette, a 62-year-old heartburn patient interviewed by NPR:11

“I can’t seem to get off the drug, because when I do, I experience severe stomach pain. I can’t eat anything without experiencing stomach pain. It just feels like you’ve got a knife in your gut. It’s just really painful.”

How to Wean Off Your Heartburn Drugs

Since you can quickly develop both tolerance and dependence on these drugs, it’s important to wean yourself off them gradually to avoid severe rebound symptoms. NEVER stop taking proton pump inhibitors cold turkey.

To get off them, gradually lower the dose you’re taking while simultaneously implementing the recommended lifestyle modifications listed at the end of this article.

Once you get down to the lowest dose of the PPI, you can start substituting with an over-the-counter H2 blocker like Tagamet, Cimetidine, Zantac, or Ranitidine. Then gradually wean off the H2 blocker over the next several weeks.

PPIs Associated With Dementia and Other Serious Health Risks

Research has linked PPIs with a heightened risk for a number of serious health problems, including chronic kidney disease,12 pneumonia, osteoporosis, hip fractures, and dementia.

According to recent research13,14,15 published in JAMA Neurology, seniors over the age of 75 who use PPIs on a regular basis had a 44 percent increased risk of dementia, compared with nonusers. Men were at greater risk, raising their dementia risk on average by 52 percent, compared to 42 percent for women.

“How PPIs might increase the risk for dementia is unclear. But other researchers recently reported that, in the brains of mice, PPIs seem to increase levels of a damaging protein that accumulates in the brains of dementia patients, known as beta-amyloid.”

PPIs Linked to Heart Attack, Even in Those Without Cardiovascular Disease

Research has also linked long-term PPI use to an increased risk for heart disease17 and heart attacks.18,19,20 Disturbingly, your risk for a heart attack is increased even if you have no prior history of cardiovascular disease.

The reason for this effect is thought to be due to the drug reducing nitric oxide (NO) in your blood vessel walls. NO relaxes your blood vessels, so by reducing the amount of NO, PPIs may raise your risk of a heart attack.

To assess whether the use of PPIs were associated with a heightened cardiovascular risk among the general population, the team mined clinical data from more than 16 million medical records on 2.9 million patients.

This revealed that patients with gastroesophageal reflux disease (GERD) who took PPIs had a 16 percent increased risk of heart attack. Moreover, as reported by Scientific American:21

“Survival analysis in a prospective cohort found a two-fold increased risk of cardiovascular mortality in PPI users… H2 blockers, which include famotidine (Pepcid AC) and ranitidine (Zantac), were not associated with increased cardiovascular risk …

‘Consistent with our pre-clinical findings that PPIs may adversely impact vascular function, our data-mining study supports the association of PPI exposure with risk for MI in the general population,’ the authors write.”

Causes and First-Line Treatments for Heartburn

“Heartburn,” also referred to as acid reflux, gastroesophageal reflux disease (GERD), or peptic ulcer disease, is characterized by a burning sensation originating behind your breastbone, sometimes traveling up into your throat. In some cases, this burning pain can be severe enough to be mistaken for a heart attack.

When food passes through your esophagus into your stomach, a muscular valve called the lower esophageal sphincter (LES) closes, preventing food or acid from moving back up.

The painful effect associated with heartburn occurs when the LES relaxes inappropriately, allowing acid from your stomach to flow (reflux) backward into your esophagus. While the conventional rationale states that this is caused by excessive amounts of acid in your stomach, that’s actually an extremely rare situation, typically occurring only if you have the rare condition known as Zollinger-Ellison syndrome.

The vast majority of acid reflux cases are in fact related to one or more of the following situations:

Research22 has also shown that sauerkraut or cabbage juice is among the strongest stimulants for your body to produce stomach acid. It will also provide you with valuable bacteria to help balance and nourish your gut. Having a few teaspoons of fermented cabbage juice from sauerkraut before your meal will do wonders to improve your digestion. Fresh raw cabbage juice can also be very useful to heal resistant ulcers.

While H. pylori can be part of your normal healthy microbiome, it can cause problems, including symptoms of acid reflux, if there’s an overgrowth of it. This typically occurs as a result of poor food choices.

Taking a betaine hydrochloric supplement (available in health food stores without prescription) will not only improve digestion, it will also help kill the helicobacter, thereby normalizing your symptoms. Other helpful foods and supplements known to suppress H. pylori are listed below.

Ultimately, the answer to heartburn and acid indigestion is to restore your natural gastric balance and function and to do that, you need to address your gut health. The most important step is to eat real food, as processed foods and sugars are a surefire way to exacerbate acid reflux. Processed foods, especially sugar, also alter your gut microbiome and promote the overgrowth of harmful microbes. So be sure to eat lots of fresh vegetables and other unprocessed organic foods.

Reseeding your gut with beneficial bacteria, either from traditionally fermented foods or a high-quality probiotic supplement is also important, as this will not only help balance your bowel flora, it can also help eliminate helicobacter bacteria naturally. Probiotics and fermented foods, especially fermented vegetables, also aid in proper digestion and assimilation of your food.

Other helpful strategies to get your heartburn under control include the following suggestions, drawn from a variety of sources.24,25,26,27 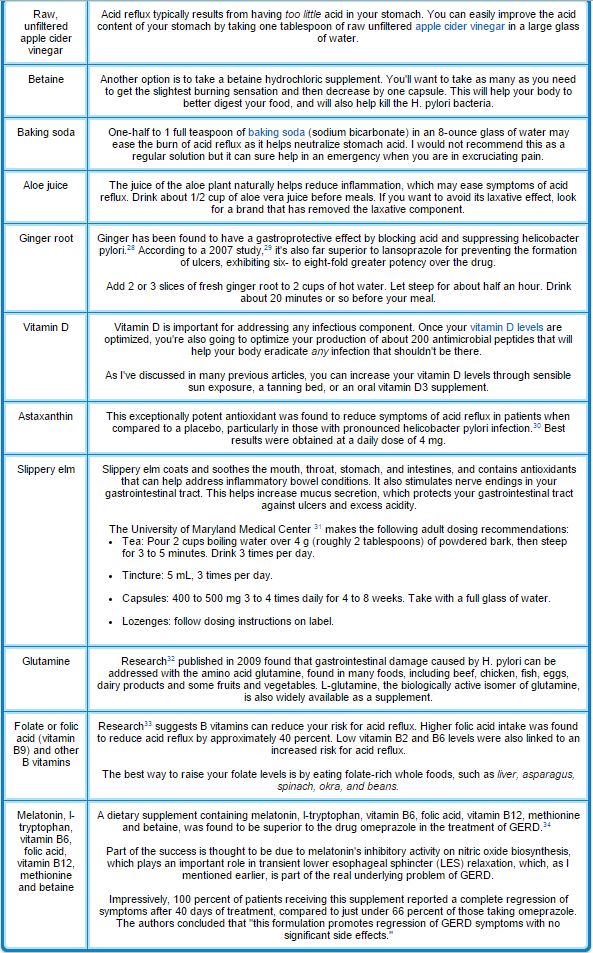 Last but not least, you could even try the Emotional Freedom Techniques (EFT). In the video above, EFT practitioner Julie Schiffman demonstrates how to tap for acid reflux.