Asking wealthy elites to provide opinions about central banking generally results in reticence on their part. After all, many billionaires became rich or stay rich only because the global economy has been “financialized” — which is to say the particular assets they hold (generally controlling equity stakes in companies) have artificially high values because of monetary policy. Many of the super rich understand, at least on some level, that the wealth they’ve accumulated seems uneasily out of proportion to the value they’ve created simply by selling high and buying low in the casino.

Even elites who made their money the old fashioned way, by building brick and mortar companies from scratch before selling out to private equity or public investors, tend to steer clear of radical prescriptions like “End the Fed.” If you’ve reached an elite level in society, it’s hard to argue with the status quo. In fact, it is precisely the market forces of creative destruction that you might fear most. 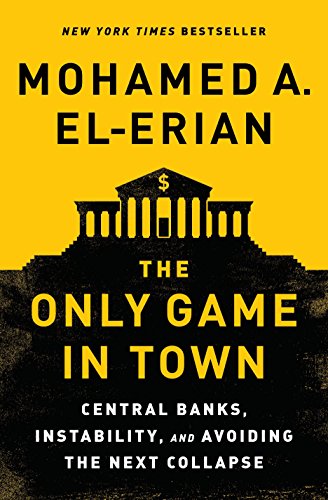 It’s thus both rare and refreshing to hear one financial-sector elite at least mildly question the omniscience, and even the benefits, of central banking. Bond maven Mohamed El-Erian’s new book The Only Game in Town places some blame for our stagnant economy at the feet of the Fed, arguing that its governors are conducting a blind experiment in this post-2008 period of the unprecedented monetary policy.

El-Erian frequently falls prey to the language of approved jargon, but in this interview he drops the elite-speak for a moment to summarize the degree to which central bankers finds themselves in uncharted territory:

Forced out of their mysterious anonymity and highly technical orientation, central banks have been dramatically thrust into the limelight as they have become single-handedly responsible for the fate of the global economy. Responding to one emergency after the other, they have set aside their conventional approaches and—instead—evolved into serial policy experimenters.

Often, and very counter-intuitively for such tradition-obsessed institutions, they have been forced to make things up on the spot. Repeatedly, they have been compelled to resort to untested policy instruments. And, with their expectations for better outcomes often disappointed, many have felt (and still feel) the need to venture ever deeper into unknown and unfamiliar policy terrains and roles.

Uncharitable readers might reach two conclusions from these paragraphs: (i) central banks flat out “run” the global economy as institutions of outright central planning, and (ii) central bankers have no idea what they’re doing.

Both conclusions ought to alarm us, but it’s interesting to note the offhand way El-Erian presents these realities as part and parcel of the (more jargon) “new normal.” For elites like El-Erian, the Fed’s role in the economy is a technical matter, not an existential question with any ethical dimension.

But surely central banking and morality cannot be neatly divorced. As Jörg Guido Hülsmann explains, central bank actions influence human behavior in ways that necessarily involve questions of right and wrong. If we accept the Fed’s role as the primary driver of the US economy, how can we deny its role in picking economic winners and losers? And how can we deny that human actors respond to incentives, for good or ill?

The imposition of low-interest rates, in particular, has a tendency upend the natural (and moral) human capacity to forego consumption and save for a rainy day. David Stockman points out that the systemic distortions caused by central bank suppression of interest rates prevent us from understanding the real price of anything—perhaps even our conduct. Even though Austrian economists understand prices as reflecting the subjective preferences and utilities of individuals, we can still posit that a Fed-fueled bubble price for an asset is higher than it otherwise would be.

So when a brilliant tech kid sells his idea to venture capitalists for $100 million, we’re left wondering if the “real” value was only perhaps $10 million. And this potential malinvestment has political as well as economic consequences: it emboldens the anti-capitalist Left in its endless narrative against the “undeserving rich.”

The Left, of course, doesn’t understand the Fed, but in this case, their conclusion is correct: some Wall Street elites really don’t “deserve” to be rich — or at least as rich as they are. The money they made didn’t result from creating a product or service to fill a market need, or from helping to allocate capital to its best and highest uses.

It resulted instead from financial engineering of a kind that is rational only in a world of low or zero interest rates, where money managers effectively gamble using house money to buy bonds, equities, and other assets. When you combine virtually “free” money with huge amounts of leverage relative to equity, even risky derivative instruments and subprime housing portfolios begin to make sense on paper.

One gets the sense that financial elites view their own wealth as irrelevant to the analysis. But of course, nothing can be further from the truth. Even if 90% of El-Erian’s reported $2.3 billion fortune disappeared tomorrow, for example, he would still be an enormously wealthy centimillionaire. This is what it means to be elite: virtually nothing that happens in the world can touch you financially. Yet the question of whether elites deserve their wealth is not simply a rhetorical question, nor is it one we should be afraid to ask.