The Battle for Syria, Part II

I continue with Hilaire Belloc and his book The Crusades: The World’s Debate.  Recall from my previous post on this topic: Belloc offers that the Crusades might have been successful had the Crusaders taken the inland cities stretching from Aleppo to Damascus.  Had they done so, they would have separated the Moslem east from the Moslem west and at the same time protected the access to Jerusalem as well as their holdings along the coast of what is today Israel and Lebanon.

Recall also the similarity to today’s chaos in the Middle East – chaos perpetrated by the west.  This chaos has destroyed the pockets of unity developing within these Moslem / Arab countries – Iraq, Libya and now Syria.  Might this fomented chaos serve a similar purpose?

…all that was needed to crystallise the military situation and determine Moslem victory was unity of command on the Moslem side. 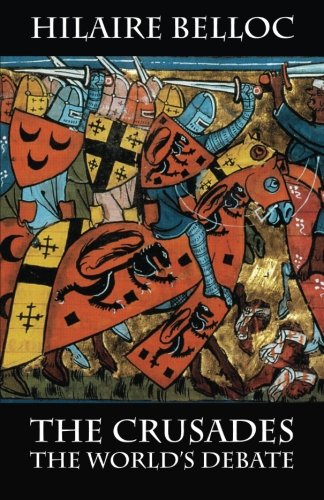 “Unity of command on the Moslem side” did not occur during the first several decades of occupation by Crusaders.  However, this was slowly changing, first with Zengi:

Imad ad-Din Zengi (c. 1085 – 14 September 1146), also romanized as Zangi, Zengui, Zenki, and Zanki, was a Turkish atabeg who ruled Mosul, Aleppo, Hama, and Edessa. He was the namesake of the Zengid dynasty.

As is noted, Zengi successfully consolidated a good portion of the eastern Moslem Middle East, with the important exception of Damascus, as noted by Belloc:

Zengi had been held up for years by quarrels of rivals in Mesopotamia.  These he had at last overcome.  He ruled at Mosul as at Aleppo – but he had not acquired Damascus.  He could not act toward the south.

Zengi made many attempts on Damascus, but failed each time.  The Damascenes often allied with the Crusader army of Jerusalem in order to repel Zengi’s attacks.

Belloc contends that failing to secure the line from Aleppo to Damascus made the situation for the Crusaders perpetually vulnerable.  From the moment that Zengi began consolidating Moslem forces, the vulnerability to Christendom in the Levant became a reality.

Then, as now, the source of disunion among Arab Moslems was not only geographic; it was also grounded in the antagonism between the major sects of Islam:

More delaying to Moslem unity even than this division among Syrian Moslems was the sharp antagonism between Egypt with its Fatimite, that is, heretical Caliphate at Cairo and the orthodox Caliphate of all that lay east of Jordan and Orontes, centered spiritually in Baghdad.

The Fatimid Caliphate was an Ismaili Shia Islamic caliphate that spanned a large area of North Africa, from the Red Sea in the east to the Atlantic Ocean in the west. The dynasty ruled across the Mediterranean coast of Africa and ultimately made Egypt the centre of the caliphate.

The ruling class belonged to the Ismaili branch of Shi’ism, as did the leaders of the dynasty.

The “orthodox Caliphate” located in Baghdad refers to the Sunni Abbasid Caliphate:

The Abbasid Caliphate was the third of the Islamic caliphates to succeed the Islamic prophet Muhammad. The Abbasid dynasty descended from Muhammad’s youngest uncle, Abbas ibn Abd al-Muttalib (566–653 CE), from whom the dynasty takes its name. They ruled as caliphs, for most of their period from their capital in Baghdad in modern-day Iraq, after assuming authority over the Muslim empire from the Umayyads in 750 CE (132 AH).

The objective of the Crusaders was to ensure continuing conflict and enmity between and among the Moslem Arabs.  The objective of Zengi was to begin the unity of the east – Egypt – and the west – Syria and Mesopotamia.  It meant unity of Damascus with the rest of Syria.

Nur ad-Din was the second son of Imad ad-Din Zengi, the Turkic atabeg of Aleppo and Mosul, who was a devoted enemy of the crusader presence in Syria. After the assassination of his father in 1146, Nur ad-Din and his older brother Saif ad-Din Ghazi I divided the kingdom between themselves, with Nur ad-Din governing Aleppo and Saif ad-Din Ghazi establishing himself in Mosul.

Nur ad-Din sought to make alliances with his Muslim neighbours in northern Iraq and Syria in order to strengthen the Muslim front against their Western enemies. In 1147 he signed a bilateral treaty with Mu’in ad-Din Unur, governor of Damascus…

Damascus now aligned with Baghdad.  Yet, this peaceful alliance did not last long.

The growing weakness of Damascus under Mujir ad-Din allowed Nur ad-Din to overthrow him in 1154, with help from the population of the city. Damascus was annexed to Zengid territory, and all of Syria was unified under the authority of Nur ad-Din, from Edessa in the north to the Hauran in the south.

In 1154, Nureddin took Damascus, unifying all of Syria.  Nureddin next turned to Egypt (returning to Belloc):

A very applicable sentence if one wants to describe current western policy toward Moslems in the Middle East.

By 1164, the conquest of Egypt by Syria began.  Ultimately, the Fatimite Caliphate in Egypt was suppressed.

The Crusaders understood the situation:

All now knew that Christendom in the Levant was on the defensive and all could feel that one issue dominated the future: whether, or rather when, the Mohammedan world of the Near East should achieve complete unity.  By intrigue and policy that unity might be postponed.  It might be delayed; it could not be avoided.

When it fully appeared, when there was one Mohammedan command all around, Jerusalem was doomed.

In 1174, Nureddin died.  Until this time, first Zengi and then Nureddin made major steps toward consolidation.  Moslem unity and the final victory over the Crusaders were thereafter achieved through Saladin.

Saladin (1137 or 1138 – March 1193), known as Ṣalāḥ ad-Dīn Yūsuf ibn Ayyūb in Arabic and Selahedînê Eyûbî in Kurdish, was the first sultan of Egypt and Syria and the founder of their Ayyubid dynasty, although it was named after his father. A Muslim of Kurdish origin, Saladin led the Muslim opposition to the European Crusaders in the Levant. At the height of his power, his sultanate included Egypt, Syria, Mesopotamia, Hejaz, Yemen and other parts of North Africa.

Saladin was 35 years old when Nureddin died.  At 47, he held rule over much of the Moslem world of the Near East – both east and west.  This was not done completely peacefully:

Not long after the death of Nur ad-Din in 1174, Saladin personally led the conquest of Syria, peacefully entering Damascus at the request of its governor. By mid-1175, Saladin had conquered Hama and Homs, inviting the animosity of his former Zengid lords, who had been the official rulers of Syria. Soon after, he defeated the Zengid army in battle at the Horns of Hama and was thereafter proclaimed the “Sultan of Egypt and Syria” by the Abbasid caliph al-Mustadi. He made further conquests in northern Syria and Jazira, escaping two attempts on his life by the Assassins, before returning to Egypt in 1177 to address issues there. By 1182, Saladin completed the conquest of Muslim Syria after capturing Aleppo, but ultimately failed to take over the Zengid stronghold of Mosul.

By 50, he rode triumphantly into Jerusalem (returning to Belloc).

At Hattin, in the summer of 1187, the Crusading State is killed in battle.

Christians were thereafter allowed pilgrimage to Jerusalem, and a hold of a small portion of the Palestinian coast.

Region against region, sect against sect, political dysfunction all around, no possibility of unified action, western action to drive division.  A war of all against all in the Moslem Middle East.  As it was 1000 years ago, this is the reality of today’s Middle East, with events drastically escalating post 911.

Assad must go, we are told.  Maybe for the same reason that Hussein had to go and Ghaddafi had to go.  They each represented success in bringing unity out of disunity – of course, not always via pleasant means.

What We Can Learn From WatergateThe Essence of US Foreign Policy