I recently read two texts that are related in ways that are not immediately apparent. One is a preachy column, published on February 19, by minicon yenta Mona Charen, scolding people on the right who have had the chutzpah to attack the Republican establishment and who have helped push Donald Trump into political prominence. The more serious reading matter is a recently published book by political scientist George Hawley of the University of Alabama, Right-Wing Critics of American Conservatism (University of Kansas Press, 2016). What these texts have in common is recognition of the presence of a formidable and by no means intellectually trivial Right that now despises the GOP.

Charen and Hawley approach this situation from diametrically opposed positions. For Mona, those “who are sabotaging conservative ideas in this country,” meaning Mona’s preferred positions, are a growing problem. Although the only ones whom Mona names as culprits are Ann Coulter and Mark Levin, we are left to assume that other troublemakers akin to these “demagogues” are working to undermine “conservatism.” It is because of their action that Trump is now giving conniptions to Mona’s friends and sponsors. How, after all, can we have a D.C.-based conservative consensus that keeps Mona’s cash-flow going while allowing undesirables into the conversation? What do we do when big mouths start complaining about “the betrayal of the base by the establishment”? To her credit, Mona does concede the obvious that conservatism, inc. has tried to ignore. Trump’s supporters include more than toothless illiterates and high school drop-outs. The Donald is being promoted, directly or indirectly, by some highly intelligent, but dangerous activists as well as by “upscale voters.” 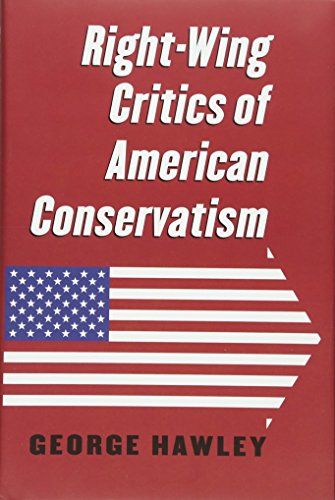 It is Hawley, however, who gives us an idea of those others who might be stirring the pot. His book provides an exhaustive panorama of thinkers on the right who have been excluded from media visibility since the neocons rose to power. Indeed, readers of this website might find themselves among those listed as the thorns in the side of the neocon power brokers. Hawley does not present all his subjects as being exactly on the same wave length. But he does suggest that all such dissenters offended what became the reconfigured “conservative” order of the 1980s, and so they were subsequently forced into opposition. Although I too have dealt with some of these figures in my short books on the American conservative movement, Hawley goes over the same ground in greater detail. He is now working on a sequel, which will deal with the “conservative” movement’s plunge into utter silliness or decrepitude.

Among features of the present movement, Hawley has been struck by all the pubescent reciters of talking points. These celebrities know next to nothing about the history of the movement they claim to represent or about anything else, except for what GOP consultants tell them. Yet, as Hawley has observed to me, these actors manqués throw around the names of “conservative classics” they never read and which have absolutely no relation to what they’ve been instructed to advocate.

Hawley mentions that some media “conservatives” insist that Friedrich Hayek’s Road to Serfdom really impacted their lives and caused them to turn to their present advocacy careers. What must be asked, however, is whether GOP front-men are really helping to restore the rule of law, as Hayek understood it. Such a development did not even begin to happen under that supposedly paradigmatic conservative Ronald Reagan, who carried out a “conservative revolution” that (alas) totally escaped my notice. Moreover, as Hawley notes, one can’t even be sure that someone who professes devotion to Hayek even read his polemic, which was written in the 1940s. Hawley also questions the genuineness of the enthusiasm shown by the hypothetical Hayek-Republican for a dated work, written in response to a Labour victory in England during the Second World War.

Needless to say, I wouldn’t expect Mona to know much about the stuff examined by Hawley, except for the fact that he mentions people that she may wish to keep out of the public discussion. These flashes out of the past are the types who may be pushing Trump’s bandwagon, which is all the more reason to hate them. Lest we forget about the eternal presence of the Nazis while reading Mona’s tear, she does go after the anti-establishment Right for engaging in “stab in the back” accusations. Like the Nazis who accused, among others, German Jews of surreptitiously sabotaging German war efforts in World War One, those on the right who snipe at the GOP, according to Mona, are really saying that Republican leadership stabbed the base in the back. Perhaps in a fitting neoconservative sequel, she could tell us how Coulter, Levin “and the others” (that may mean us) are appealing to the latest stand-in for Hitler in a replay of 1938.

Are You a Left-Winger or a Right-Winger?The Hell Called WWI