Everybody Hopping on Gold Bandwagon, but Signs There All Along

The mainstream world of economics and investment has the attention span of a 12-year-old hopped up on sugar.

A couple of months ago, it was all doom and gloom for gold. The Fed was talking interest rate hikes, government spokespersons were claiming victory over the recession, and mainstream analysts were hastily pounding nails in gold’s coffin.

Cancel the wake, because today everybody has turned bullish on gold with the price up more than 9% since New Year’s Day. 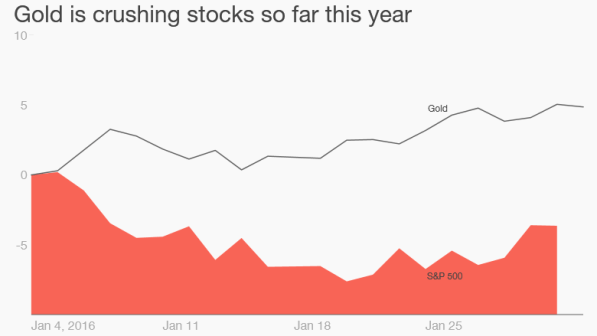 A headline at CNN Money earlier this week boldly proclaimed, “Gold is 2016’s most beloved asset.” The story highlights the more than 10% gain in the price of gold since its low after the Fed hiked rates in mid-December, along with the dismal performance of stock markets, pointing out the Dow is down more than 1,000 points and the NASDAQ has lost 8% of its value:

These opposite moves actually make perfect sense. Gold tends to shine brightest during times of stress. The precious metal is viewed as a reliable store of value for investors to turn to when they’re worried about economic doom. And right now, there’s no shortage of exactly that kind of anxiety.”

Time Magazine published a similar article this week and drew the same conclusion. It seems the mainstream suddenly woke up and swerved into reality. At least for the moment, Gold is in vogue.

But the signs have been there all along. These people just weren’t paying attention.

For months leading up to the Federal Reserve rate hike, Peter Schiff was saying the economy wasn’t strong and the data didn’t justify such a move. From the day the Fed nudged up the rate until now, Peter has said it wasn’t the beginning of rising interest rates, but the end. He’s consistently stayed on message, despite the naysayers:

Now, CNN Money is quoting analysts that sound a lot like Peter. This is what Peter Merk had to say about future Fed interest rate policy:

The Fed might have to do a U-turn after its historic quarter point rate hike.”

Peter also predicted gold would rise in the wake of a rate hike, defying conventional wisdom. He understood that the price of the much-anticipated boost in interest rates was already reflected in gold’s price. He said so on CNBC the day of the Fed made its announcement:

I don’t think there is that much downside because most of this is already built into the price. Everybody has been anticipating the Fed is going to raise rates.”

The price dipped briefly the day after the announcement, but immediately began to rebound. Since hitting its low on Dec. 17, the price of gold has climbed more than 10%, and 9% since the beginning of 2016.

Peter has been so accurate in his predictions because he focuses on long-term fundamentals based on consistent application of economic principles. Gold has caught the mainstream’s eye because the price is up, but the dynamics that led to its rise were there all along – a weakening economy floating along on artificial stimulus from the Fed.

The problem is that far too many pundits eagerly devour and regurgitate government spin and conventional wisdom. Often, they miss, or simply ignore, the underlying fundamentals. Today, the fact that the economy isn’t quite as strong as they’ve been led to believe is smacking them in the face, and suddenly, they’ve rediscovered the value of gold.

The key for the investor is to focus on the fundamentals. Study the longer-term trends. Look at the data underlying the spin. When you do so, it becomes crystal clear that America is heading for an economic downturn. As Peter said on CNBC World just this week, we may well already be in a recession:

The data seems to back up Peter’s assertion. Just this week, CNBC reported that exports fell, widening the US trade deficit. In fact US exports fell in 2015 for the first time since the recession. Meanwhile, US productivity plunged in the fourth quarter of 2015 at the fastest pace in more than a year. And factory orders fell 2.9% in December, even worse than analysts expected. It was the largest drop in more than a year.

Even the “good” job numbers reported this week came with a dark lining. Some 70% of those 151,000 positions added in January were minimum wage jobs in retail and food industries.

We’ve seen this type of news coming out for months – long before the rate hike – even while economists were insisting the US economy was robust.

The key for the wise investor is not to get caught up in the mainstream spin of the day. Watch the long-term trends, focus on fundamentals, and consistently apply basic economic principles

The Fallback Candidate of a Reeling Establishment Learn From Scrooge McDuck