In July 2014 I wrote an article on GoPro and why I predicted that company, and its post-IPO stock, to be severely overvalued. I received dozens of emails from readers who were unhappy with me “bashing” what folks think is a very innovative product. Don’t get me wrong, for I also think it is a beneficial and cool product, and actually, I would actually love to have one for recording some of my own unique memories.

I stated that the IPO was ridiculously saturated with irrational exuberance, and the immediate surge in its stock after the IPO was unsustainable do to myriad factors starting with the usual suspect: the Fed-inflated stock market that propped up the stock’s bullish run on steroids right out of the IPO gate. Additionally, I thought the company was riding the tide of the Narcissistic generation’s expression of self-love through endless video selfies. (Look at me! Here I am! Here I was! There I go! Booyah!) Remember, action cameras are still a niche market. The company’s customers have been buying $200-$400 cameras on credit, and as is often the case with fast-moving technology,

those same customers replace them as newer, more advanced products are released. This can occur when cheap debt is allowing individuals and households to keep buying and buying while they bury themselves in debt. However, as it becomes apparent that the party is almost over and the economic environment appears to be quivering, the novelty wears off and these products lose out to more immediate needs.

I do not believe there is anyone who was calling GoPro as a short, or a bubble, before I wrote that 2014 piece.

Shortly after I wrote about GoPro, its stock kept escalating from a post-IPO price point of $48/share to almost $90/share three months later. The stock price started to creep downward throughout the rest of 2014 and back up during the first part of 2015, but by the 2nd half of 2015, the stock went into rapid decline. This aligns perfectly with the multiple signs of the recession that started appearing by the early 4th quarter. Today, GoPro sits at a paltry $12/share. The company already announced job eliminations last month. I understand that, currently, short sales represent about 30% of the company’s outstanding shares. 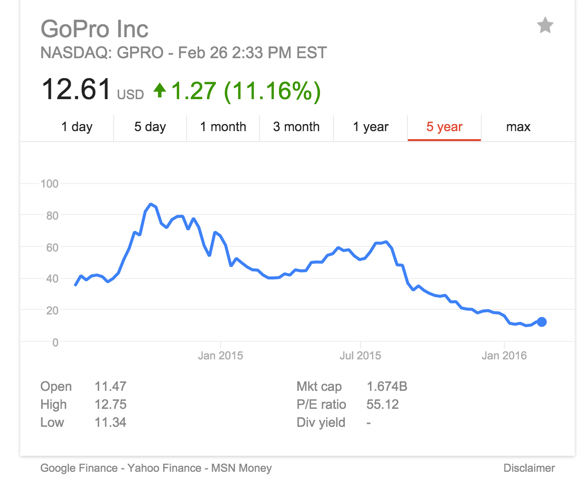 And once again, in GoPro we see a company exhibiting poor financial performance with a stock buyback skeleton in its closet. In the 4th quarter of 2015, GoPro commenced a stock buyback to acquire 1.5M shares of its Class A stock. The company’s 2015 financial results indicate a total repurchase of $36M with a remaining authorization to the repurchase of $264M. This is insanity run amok. And it gets even worse when you read this quote about GoPro losing big on its buyback.

Based on GoPro’s closing share price of $10.71 on Wednesday, GoPro’s 1.5 million share repurchase is worth about $16 million.

Said another way, the company lost about $19 million buying back its own stock.

While corporate propaganda makes the claim that a stock buyback is an investment in itself, these buybacks are balance sheet carnage for the purpose of enriching company executives and propping up its stock price. GoPro couldn’t even do that. The Motley Fool presents this simple analysis:

Spending $35.6 million to repurchase shares and laying off 7% of its workforce will reduce the impact of stock-based compensation and prop up its GAAP earnings. Unfortunately, the buyback still didn’t prevent GoPro from posting a net loss of $0.08 per share last quarter.

…Looking ahead, GoPro needs to be smart about its share repurchases. If GoPro blindly uses buybacks to tighten up its valuations, inflate earnings, or offset dilution, it will simply confirm that the management retains a short-sighted view of the company’s future.

However, the Motley Fool piece goes on to recommend strategic uses for another stock buyback, but I strongly oppose any such notion. A robust balance sheet is a company’s sign of strength and longevity, and it provides a peek into the soul and ethos of its executives. Cash and equity are essential to a company’s survival, especially in bad times. Cash and equity – a healthy balance sheet – can also cover bad management decisions in times of difficult business operations.

I have become weary of the neoclassical finance and Ivy League MBA types speaking of the glory of stock buybacks as being some divine path to company and shareholder enrichment. Yet a solid, coherent reason for companies undertaking massive and hyper-aggressive stock buybacks is never given. It’s just what modern executives know, and it’s what they’ve been taught by academics that have never spent a day in an accounting or risk management environment.

A stock buyback is an apparatus that provides a short-term stimulus to drive up the stock price and steer quarterly earnings so that shareholders and analysts can revere executives for a “brilliant” move in difficult times. Some notable companies that have self-destructed through the use of short-term strategies, including stock buybacks, are Lehman Brothers, Merrill Lynch, Wachovia, Washington Mutual, Staples, and Radio Shack. In fact, here’s the conventional cheerleading that is acknowledged in corporate finance circles and the heedless bulls in the financial media:

Thus, when companies buy back stock, investors may consider this to be a signal that these companies view their stock to be undervalued. If there is a signaling effect, the stock price should be expected to jump on the announcement of the buyback and not at the time of the actual execution.

The GoPro financial results shown below indicate a quarter-over-quarter collapse for GoPro when you compare 4th quarter 2014 results with the same quarter in 2015. In the 4th quarter of 2014, GoPro stock was still flying high at $60+/share; then came the precipitous drop in operating and net income from 4Q 2014 to 4Q 2015 (when stock was at about $18/share).

When you read the corporate blather and mainstream analysis of said blather, you don’t know whether you should choke or laugh. To quote an article on the Motley Fool:

GoPro blamed a large portion of that miss to weak sales of the ice-cube sized HERO4 Session. CEO Nick Woodman admitted that the company had “priced the products too high at $399, which caused consumer confusion” between the identically priced (and more popular) HERO4 Silver. The subsequent $100 price reduction for the Session in September caused a $19 million writedown for the quarter. Woodman also admitted that GoPro “underfunded marketing in the second and third quarters of the year,” and it would take a “more aggressive advertising approach in the fourth quarter” with a return to TV ads.

So there you go – product pricing, customer confusion, and a lack of money being thrown at marketing are given as the reason for the 2015 dive. This is while the company’s sales and marketing expenses actually rose almost 40%. But this is to be expected from the devotees of Wall Street who run amok in the financial press. Responsible executives of this company should have skipped this stock buyback buffoonery and invested the dollars in R&D and marketing and sales strategies to fund that more aggressive marketing campaign championed by the company. Stock buybacks are rarely undertaken nowadays as an investment for the future. 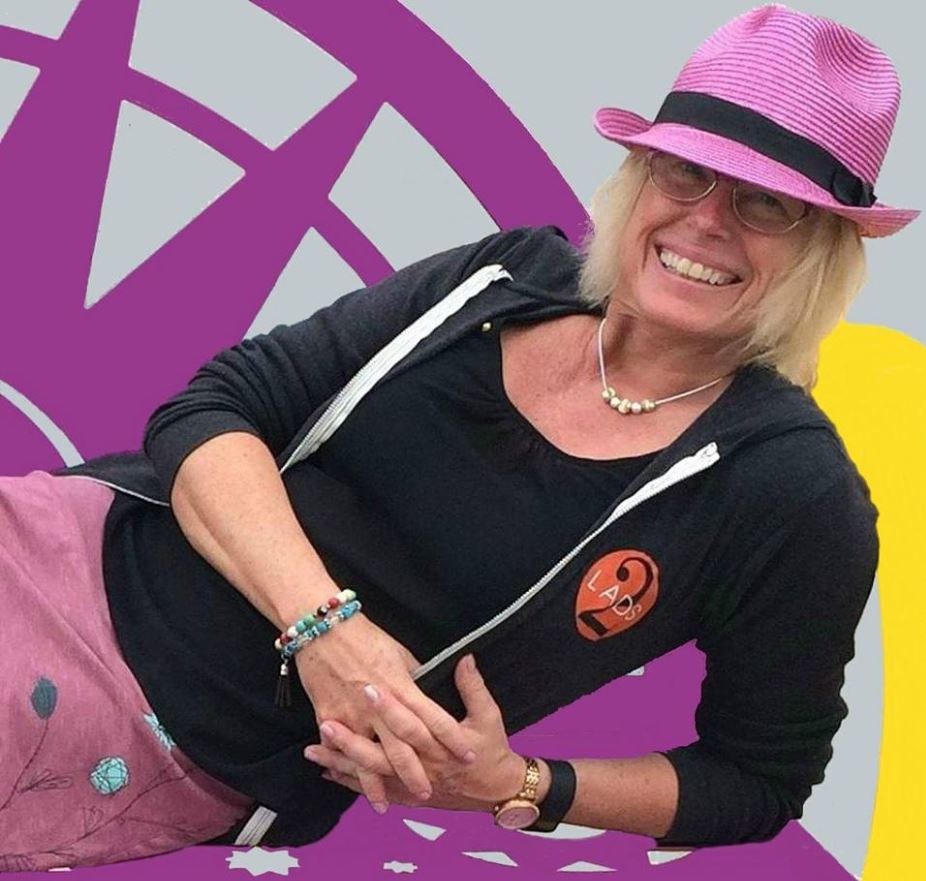 I don’t know whether GoPro will regroup and survive long-term or eat itself alive through executive mischief that is operating in an economic environment undergirded by unpredictable monetary interventions and political hornswoggling. We know the financial press will rarely step back from conventional wisdom and dissect the macro environment and all of its unsustainable tenets as the government manipulates monetary policy and the financial markets to prop up a short season of so-called prosperity.

In early 2016 the economy is in a state of steady retail contraction. Retailers have been growing their immense brick-and-mortar footprints and carelessly managing company assets and cash flow while the Federal Reserve has been injecting multiple interventions into the economy post-2008 to avert the necessary cleansing of Wall Street fraud and Main Street recklessness. It is worthy to note that corporate debt has almost doubled since the 2008 meltdown and stock buybacks are propping up the equity market. Corporate executives are all drinking the Kool-Aid from the Federal Reserve’s punch bowl.

And still, there are conventional-thinking, financial sector-employed halfwits out there who are going all bullish on GoPro and cheerleading for yet another stock buyback. Give them a spot at the table with the punch bowl, will ya?