An Anarchist's Adventure in Trumpland, Nevada

Every four years me and a few of my politically interested friends fly out to Las Vegas to relish in permitted debauchery while observing the Republican Caucus circus. Needless to say, it’s usually a Grand Old Time, and (most of us) are quite capable of blending in with boiler-plate conservatives to get an up-close and personal feel of the scene. Think of our excursion as a morbid and irreverent intrigue of where the U.S. political pageant show is headed.

Of course, our primary mission was to have a complete Donald Trump experience, which we accomplished by staying at the Trump International Hotel, attending his large pre-caucus rally at the South Point Arena, and visiting his “watch the results party” at Treasure Island. And yes, we did gamble in between events. 23 red for the win, by the way.

When we arrived at the hotel, I was surprised that it didn’t have a casino. I guess this means President Trump won’t be gambling our tax dollars away. Everything in the place was squeaky clean, and the staff was very professional and helpful. Perhaps Donald can remake the DMV in his image? If that happened, I honestly wouldn’t mind if everything in the U.S. was labeled with Trump, just like this hotel. 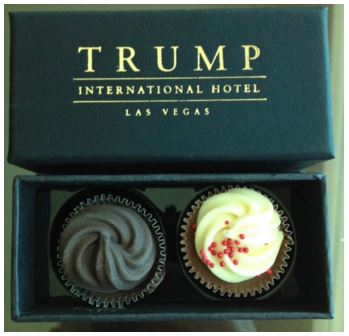 These complimentary Trump truffles were actually quite delicious. I kept the box and the Trump shower cap as keepsakes.

We arrived at the rally about an hour after the doors opened, and assimilated into a massive line of people, which snaked its way through multiple rooms. Fortunately, this gave us enough time to finish our abnormally large flask of Woodford Reserve before its inevitable confiscation by the SS (that’s the Secret Service).

By the time we entered the arena it was very full of all sorts of middle class, conservative-looking Americans. Some were plainly dressed while others sported their favorite pro-Trump or anti-Hillary t-shirt. I believe that our “Make America Great Again” red hats, which were made in China and available for purchase at the hotel convenient store, aided our deft maneuver to the limited floor seating area.

Trump’s primary message to the massive pep rally was what we all expected it to be: build a wall on the southern border, make the military stronger, pause incoming Muslim immigration, and the mainstream media stinks. Trump utilized these core concepts, again and again, to drive home the point that despite his freewheeling nature, he’s strong on these “important” conservative issues. And the crowds he masterfully commands loves him for it.

Trump doesn’t need to elaborate on his points because many on the right have felt betrayed by the Republican establishment for years and believe Trump’s ostensible independence enough to back him. They don’t care that he doesn’t always say what they like. At least, he’s not reading from a script. They don’t care that he’s a braggart. They want to feel proud, too. They don’t care what MSNBC or Fox News says about him. They care that he’s going to make America great again. And besides, in their mind, the lying liberal media have helped make the country worse. 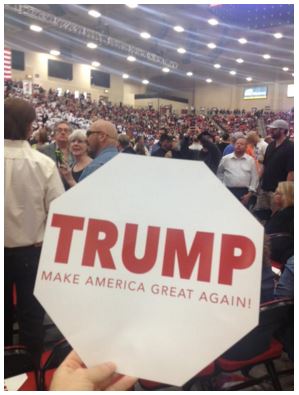 The irony is probably lost on Trump supporters that their candidate’s name and the slogan is on a stop sign. In fairness, it should be noted that the other side of this sign read “22” for the number of veterans that kill themselves each day.

(Let me pause my writing and break tense by saying that Donald Trump just walked by me in the hotel lobby. I can confirm the greatness and majestic qualities of his hair).

On election day, my friends and I ended up attending a nearby caucus to observe the scene and hear the (not-very-deep) reasoning behind the positions of the voters. Unsurprisingly, much of these decisions came down to which candidate is most popular or has the most buzz. And that was most definitely Trump.

Trump’s celebrity and astounding earned media have solidly planted him in the public mind. All those people at the big rally weren’t necessarily pro-Trump, but they were politically-minded and interested enough in his momentum to consider his legitimacy. I even talked with a young pro-Bernie Sanders Democrat who came to the event. Given the choice between Hillary and Trump, he said that he’d actually vote for the latter, which is quite telling of the attitudes against Hillary (and CNN) by the progressive youth. We’ll see what develops with that sentiment during the general election! 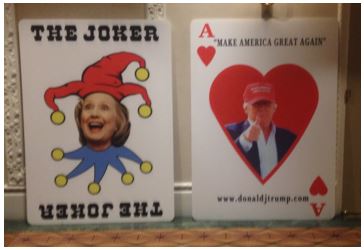 As a fan of the trickster archetype, I wasn’t too happy with Hillary’s face being used on the Joker card. I thought the Queen of Spades (the Black Maria) would have been more fitting.

Later that evening, we got into the results watching party just in time to see a glowing Trump declare victory, highlight his popularity with Evangelicals and even Hispanics, and recite the previously mentioned core concepts before triumphantly leaving to enthusiastic cheers. As of now, it appears that Trump has got the Republican nomination in the bag.

Trump has captured the support of the disaffected right by tapping into their deep-seated frustrations, and many people are offended and outraged by his more careless statements. For instance, at the rally, he said he’d like to hit one of the “obnoxious” protesters in the face. I’m not sure it’s wise for Donald Trump of all people to suggest knuckle sandwiches as a proper solution to dealing with loudmouths!

Ultimately, though, Trump is just a celebrity billionaire businessman who has probably never thrown a punch in his life. He is motivated to cement his name in American history, just like he does with everything in his hotel. He will say whatever to make that reality happen, which is not unlike the vast majority of presidential candidates.

So if you’re getting really worked up about Trump’s success in the presidential horse race, I suggest relaxing a bit and enjoying the show. In practice, it’s actually quite likely that a Trump presidency will be much like the ones before it. After all, the wicked Washington machine has a devilish way of molding minds to its agenda. Besides, the country survived eight ridiculous years of George W. Bush. Do you really think a former New York Democrat is going to do any worse?

As an anarchist, I’m definitely not motivated to vote or campaign for Trump (or anyone, for that matter). However, I do appreciate his campaign’s delegitimization of the “prestigious” political process, the routing of the Republican party oligarchy, and victories over the establishment press, who have clearly lost their power to shape the official narrative against him. And who knows, maybe an elected Donald Trump would also successfully wreck the executive branch. Now that would really make America great again.

The Best of Andrew Ward

Andrew Ward [send him mail] is an activist who works and lives in California.