A host on bubblevision this afternoon noted that the S&P 500 is now down $2 trillion for the year and wondered if his panel could explain “what’s happened since January 1st?”

The implication, of course, was that since no new recessions have started—- nor have any new wars been declared, polar glaciers melted or Wall Street banks gone down for the count——that the market’s worst ever start of the year was surely overdone. Maybe it was even BTFD time again.

Then again, maybe the outlook is just as bad as it was before January 1st, but that the outlookers have acquired a new outlook. Stated more baldly, perhaps the sleepwalkers have finally awakened.

That would certainly seem to be the case with the market’s high flyers. Most of this year’s spectacular flameouts have reported nothing new nor issued any disturbing 8-Ks. Amazon apparently had a swell Christmas, for example, but its share price is now down 19% from the bubble vision man’s line of demarcation.

Indeed, Amazon and its fellow FANGs (Facebook, Amazon, Netflix and Google) succinctly explain the pivot. They have actually been the canary in the coal mine all along; it just now that their warnings signals are being noticed.

As we have previously pointed out, the FANGs were the “beard” that hid the market’s initial breakdown during 2015. They gained $485 billion of market cap (+66%) while the other 496 companies in the S&P 500 actually deflated by more than half a trillion dollars.

Needless to say, that happened before the calendar year turned. Yet when the stock market’s advance drastically narrows to just a handful of ultra-momentum stocks, the bull’s days are numbered, and always have been.

That truth goes back to the Four Horsemen of the tech bubble, the Nifty Fifty of the early 1970s and even the pyramided investment trusts of 1929.

Needless to say, valuations get utterly detached from the fundamentals — and even rationality itself — when the central bank-induced financial bubble reaches its apogee. At that point, speculators pile into the LSS like lemmings headed for the sea.

When the stock market breaks, it is the LSS bubble extreme that crashes the hardest, because that’s where the mania gets finally concentrated.

Already in the first two and one-half weeks of trading this year, Amazon and Google are down nearly $60 billion each. The FANGs as a group have lost $160 billion of market cap, or more than 33% of their entire 2015 bubble eruption.

Stated differently the four fantastic FANGs gained about $2 billion per trading day last year. By contrast, they have lost about $15 billion per day in 2016 so far.

So to answer the bubble man’s question, the worst start to a year in history — the 1930s included—is not at all due to what has happened since January 1st; its the sum of all the folly that has gone before.

Financial television’s perma-clown, Jim Cramer of CNBC, was good enough to give us the FANG acronym this time around. It’s much like when he came up with the Four Horsemen of Tech just before the dot-com crash, and rode the bubble until it splattered.

To be sure, these four highfliers — Microsoft, Dell, Intel and Cisco — were all solid companies with real, tech-based products and inventions that have continued to exhibit solid growth in the 15 years since the tech crash. But like today’s high flyers they were drastically overvalued.

When the air came out of the bubble, the carnage was immense, but that wasn’t due to anything that happened after January 1, 2000, either. It was the same old speculative folly, and the cause was the same central bank printing press.

As shown below, the combined market caps of the Four Horsemen dropped from $1.7 trillion to $400 billion, or 77%, in barely two years. That’s every bit of what we expect to happen with the FANGs this time around. 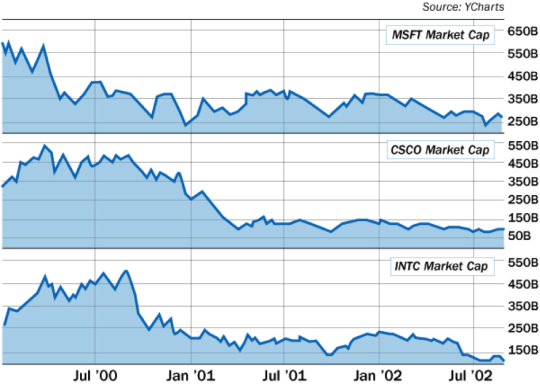 There is one thing different after 15 years, however, and Cramer is surely symptomatic. To wit, aging bulls eventually lose track of whatever they may have learned along the way, even as their sensory apparatus fails——- as in deaf, dumb and blind.

It should have been a lesson well learned that Cisco Systems, for example, went on from $10 billion of revenue at the time of the tech crash to $50 billion today, and from $2.5 billion of net income to nearly $10 billion, yet is still valued at only 23% of its peak market cap after 15 years of strong performance. 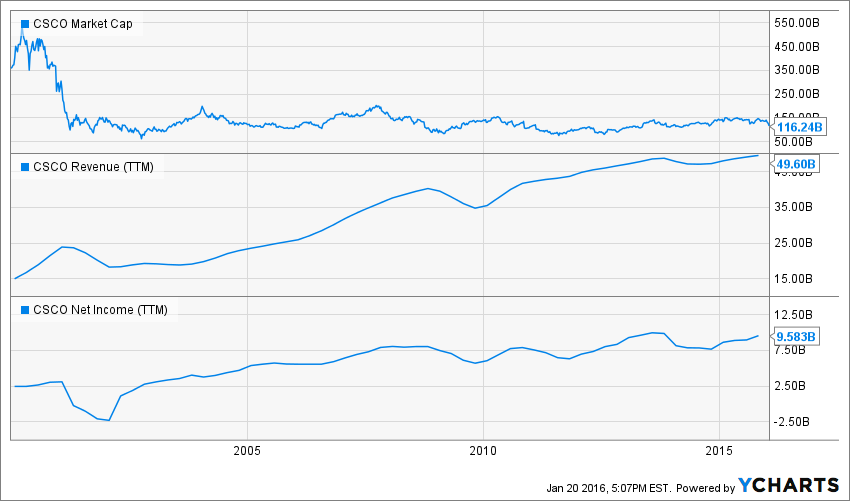 Yet today’s FANGs are in many way far more absurdly over-valued than were the Four Horseman. Even after it’s 19% haircut since December 29th, for example, AMZN is still valued at 817X its $328 million of LTM earnings.

Yes, net income doesn’t count when you are a purportedly a growth engine like Amazon. Perhaps that’s why its current $268 billion market cap represents 134X the $2.0 billion it has cumulatively earned during its entire 25-year history!

But somewhere in the good book of capitalism it is written that operating free cash flow is the name of the game. After all, that’s where value comes from.

Needless to say, AMZN doesn’t have much of that, either. Its LTM cash flow from operations of $9.8 billion was mostly absorbed by $7.1 billion of CapEx and other investments. So its free cash flow of $2.7 billion had only grown by 8% per year since 2011, yet it was valued at 96X.

In fact, back at the end of 2011 when its market cap was only $79 billion, Amazon’s free cash flow multiple was just 40X. What we have had, therefore, was multiple expansion like never before; and it all happened well before January 1st.

Facebook is another case where the evidence was in long before January 1st. When it reported results for September 2015, its LTM operating income was $4.8 billion. Despite the super growth  meme which surrounds it, that was not a blistering gain. In fact, it was a decline from the $5.0 billion of operating income FB had reported for the LTM period ending one year earlier in September 2014.

Yes, FB gained $88 billion of market cap, or 41%, last year, even as its earnings dipped below the flat line.

To wit, Facebook did gain $4.92 billion of revenues, or 45%, on a year-over-year basis. But all of that went straight out the door as operating expense in the patented Jeff Bezos style.

Specifically,  sales and marketing (SG&A) expense rose by 91% compared with the prior year, and research and development (R&D) expense soared by 135%.

Indeed, R&D expense alone rose from $2.0 billion to $4.6 billion annually, thereby consuming 53% of the entire gain in gross profit from FB’s sales surge. On an overall basis, operating expenses for SG&A and R&D combined increased by $4.23 billion compared with prior year, or by 100%.

Yes, that threw a monkey wrench in FB’s booming growth narrative. During the LTM ended in September 2015, Facebook generated only a $4.03 billion increase in gross profit. So the boys and girls in the corporate dorm spent more new dollars on the operating expense lines than they gained in profit contribution from new sales.

And there is more of where that came from; it was also evident long before the turn of the year.

Take FB’s infamous $22 billion acquisition of Whatsapp. It turns out that Facebook paid $55 per user for a business that had 13 cents per user of revenue.

In fact, Whatsapp is just a text messaging service that challenged the paid SMS services of AT&T, Sprint, Verizon, etc. It did this by reducing the transmission charge from $10–20 per month to, well, nothing.

The CEO of an imitator succinctly explained why this tactic works. “It always comes down to the economics,” said Greg Woock, chief executive of Pinger.“Free is a compelling price point.”

Yes, it is, and that was evident long before this year’s worst start to the stock market in history. In early 2014, FB’s brash young founder, controlling shareholder and CEO explained the sum and substance of Facebook’s crazy valuation and its modus operandi:

Our strategy is to grow and connect people. Once we get to 2–3 billion people, there are ways we can monetize.

And exactly how do you “monetize” a user base that is fiercely devoted to “free stuff” in their use of social media?

You sell advertising. At the end of the day FB is just an Internet billboard—— a place where mostly millennials idle their time in or out of their parents’ basement. Whether they grow tired of Facebook or not remains to be seen, but one thing is certain.

Namely, that ads are nothing like a revolutionary new product such as Apple’s iPad, which can generate tens of billions of sales out of nowhere.

The pool of advertising dollars, by contrast, is relatively fixed at about $175 billion in the U.S. and $575 billion worldwide. And is subject to severe cyclical fluctuations. For instance, during the Great Recession, the U.S. advertising spend declined by 15% and the worldwide spend dropped by 11%.

And therein lies the skunk in the woodpile. Due to its sharp cyclicality, the ad spend is a distinctly low-growth pool of money. And that pool of money is fiercely competed for by the various media venues. Thus, the U.S. ad spend of $177 billion in 2015 was only $5 billion greater than the $172 billion spend way back in 2008.

So when you average out the cyclical fluctuations, the trend growth in U.S. ad spending has been about 0.5% per annum. Likewise, the global ad spend increased from about $490 billion in 2008 to $575 billion in 2015, reflecting a growth rate of 2.3% annually.

Yes, there has been a rapid migration of dollars from TV, newspapers and other traditional media to the digital space in recent years. But the big shift there is already over.

Besides that, you can’t capitalize a one-time gain in sales of this sort with even an average market multiple. And that’s to saying nothing of FB’s current preposterous multiple of 95 times its $2.8 billion of LTM net income.

Not surprisingly, Cramer never noticed any of this. But what about the bubble vision man?

Perhaps the Truman Show is truer than fiction, after all.