Just in time before the start of 2016, a new poll just released has rocked the political and academic world! By the widest margin ever recorded, Brian Wilson, noted broadcaster, blogger, podcaster, author and LRC contributor, has been named 2015 “America’s Most Admired Political Pundit” according to a Gallop survey. Mr. Wilson was named by an astounding 82% of respondents to the poll taken Dec. 24-26.

Mr. Wilson reacted to the announcement with typical humility: “I am humbled.” He went on to say: “This is a great and well-deserved honor. I’ve been typing with my fists for decades as well on my radio shows speaking Truth to Stupid. It’s comforting to know others have finally noticed! With all due respect to my colleagues, 2016 is going to be one helluva year. This is no time to be timid; we have a nation of aggressively ignorant, virally apathetic and terminally narcissistic “citizens” who need to become aware how corrupt America has become. We are teetering on the precipice of the brink! The 2016 election will determine the future for future generations in our future!” *

Hopefully you noticed the glaring omissions and commissions that litter the media landscape when reporting on polls. Here’s just one example. Notice the absence of any details of the poll: sample size, questions asked, 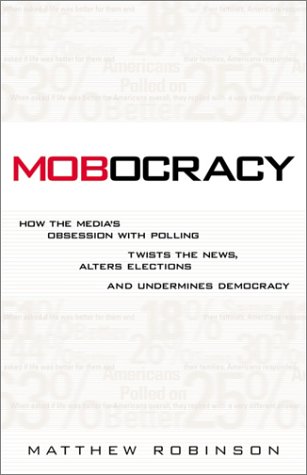 Just as there is a “Whole Kernel of Truth in Every Form of Humor”, the use of poll results by many in the media would be laughable if not for the resulting the manipulation of what remains of the mind of the voter.

In 2002, James Bovard introduced me to Matthew Robinson’s Mobocracy: How the Media’s Obsession with Polling Twists the News, Alters Elections, and Undermines Democracy. Even out of print, it remains the best primer for anyone unfamiliar with the subject

Despite the overwhelming admiration ladled upon me in the Gallup poll above, it would be supercilious to appear to inform LRC readership of the basics of polling; Robinson’s book handles that all quite well. Yet, who among us could not use the occasional “review”?

The beauty of Robinson’s “Mobocracy” is his thorough coverage of every point referenced in the title in a mere 360 pages of reasonably sized print including, but not limited to:

Does the Public care about Media Polls?

Who Paid For It?

The Accuracy of Campaign Polls

Now 13 years after my only interview with Robinson, I tried contacting him for this article to get his thoughts on the impact of “social media” (email, web sites, blogs, texting, YouTube) on polls and polling as well as interactive platforms (Facebook, Twitter, SnapChat, Tumblr) now driving huge swaths of public opinion. Unfortunately, while I may have located Mr. Robinson, allegedly working for a large telecom, he did not respond to my several requests.

Still, with 2016’s coming increase in political insanity already approaching Happy Dale proportions, a quick read of “MOBOCRACY” now at the beginning of the New Year would be instructive, informative, entertaining and economical. Amazon has a limited supply of hardcover copies starting at $.01 (plus shipping and handling!) **

**89% of respondents said “Wow! What a deal!” or something similar.

*For those unfamiliar with Satire, Ingrained Sarcasm or feeble attempts at Levity, the Gallop poll above is USDA Select Bull***t.

The Car Industry Crash The Cultural Contradictions of the Middle Class