John Meacham’s “biography” of our 41st President George H.W. Bush, “Destiny and Power” comes in at a whopping 864 pages and a wrist snapping 3.4 pounds and it’s pure whitewash. It ignores inconvenient historical facts because it is an authorized biography. Meacham seems oblivious that the goofy, patrician manner and weird syntaxes that makes him look like a bumbler hide a man of steely ambition, ruthlessness, entitlement, and duplicity.

Fortunately, my own book Jeb and the Bush Crime Family will be released January 26th and will expose what a tool of the power elite “Historian” Meacham is. There is a whole genre of books that are authorized profiles that stress the Bush Family “integrity” and “honor.” All are vehicles which cover up the truth about the House of Bush. Destiny and Power is one of those.

Meacham ignores declassified Federal Documents showing Bush was in Dallas on November 22, 1963 steps away from Dealey Plaza and lied to the FBI to create an alibi when he said for 30 years he “couldn’t remember where he was.”  It’s not in Meacham’s book. 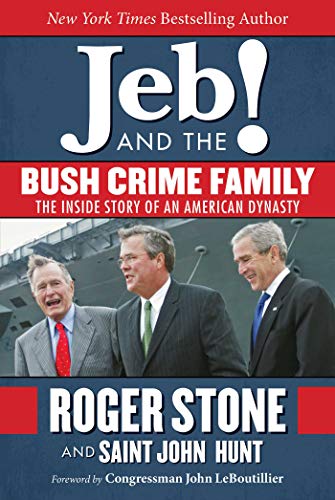 Meacham omits the stonewalling of the Iran-Contra Investigators on the trail of cocaine and arms smuggling that Bush oversaw as Vice President and chair of a Secret Task Force to illegally raise money for Nicaraguan Rebels. Bush, on advice of Presidential Legal Counsel Boydon Grey (creepy son of Eugenics Guru and funder Gordon Grey) refused to be questioned or to turn over documents. Also not in Meacham’s book.

CIA Drug Smuggler and Pilot Barry Seal was murdered 3 days after threatening to expose Bush sons Jeb’s and W.’s involvement with drug smuggling. Seal is gunned down with Bush 41’s private phone number in his wallet. That’s not in Meacham’s book.

There is no mention of Prescott Bush’s racist support of eugenics, his financing the armament of Hitler or his ownership of controlling interest in a German steel mill that used slave labor from the Auschwitz death camp. Again not in Meacham’s book.

GHW Bush even paid for a vanity biography of Prescott Bush Duty, Honor Country that airbrushed his Nazi business dealings out of the picture. Author Mickey Herskowitz should be ashamed. The Feds sanctioning Prescott’s bank for trading with the Nazis is not mentioned.

Far from timid, he pulled the strings behind many of the dark events which have come to haunt us. Yet Bush maintained he was “out of the loop.” Never the one to take responsibility, never the one to accept blame, Bush CIA pal Felix Rodriquez ran the loop. Bush and CIA Director Bill Casey were the loop.

Destiny and Power, reads more like an autobiography than a biography unless biographies are limited to relating the facts only approved of by the subject. This massive self-serving account is a deliberate exclusion of many of the duplicitous plots and lies. Like the one about his fighter plane catching on fire after being hit. Poppy dashes out and parachutes to safety. Facts show Bush bailed prematurely without warning and left his comrades to die. The last part is historical fact. The true story is one of cowardice and self-preservation sold to people as wartime bravery in endless 8 mm TV commercials of a smiling Poppy being scooped at sea. Meacham buys the Bush spin that he’s a hero.

When I realized that some of the story had come from Bush’s own personal diaries, I should have realized that Bush wouldn’t have written down anything that would make him look bad or could incriminate him. I wonder how, as a journalist and respected author, John Meacham produced such an obviously sanitized and unbalanced bio. 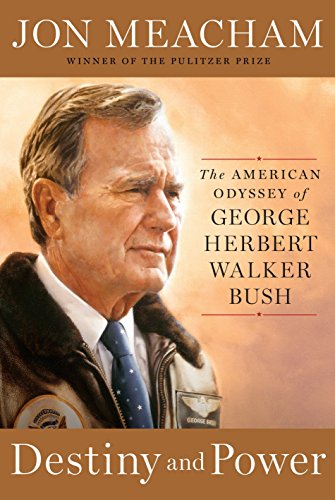 There is no mention of the family racist support of Eugenics or Planned Parenthood and Population Control for lesser races. One never gets the impression that so many politicians of the era had of George H W Bush: that he was weak, limp, soft-spoken, and timid.

That perception, perpetuated by Bush, could be the greatest con of recent times. Driven, organized, and ruthless, he pulled the strings behind many of the events which have come to haunt us. Yet Bush maintained he was “out of the loop.” Never the one to take responsibility as a good CIA man.

Destiny and Power is a masterwork. A brilliantly-concocted script written only to praise Mr. Bush, Destiny and Power has garnered critical acclaim: a New York Times Best Seller and one of the top ten books of this year. The book is a fraud! Look who loves it – establishment elites Walter Isaacson and LBJ punch Doris Kearns Goodwin who was well acquainted with “Jumbo.” Mike Beschloss jumps on. These people hide the history of our country. Meacham hides it too, in giving us the Bush family version of events while ignoring historical facts.

Meacham, like Bill O’Reilly, misses much about the backstory of the Reagan assassination and Bush ties to it – the second gunman, Bush’s secret effort to set Reagan up in Iran-Contra, and later have him declared non compis mentis and seize power.

Old man Bush profiteering at Carlyle taking Saudi payoffs and connections to the Bin Ladens? All sanitized in Meacham’s book.

As old man Bush nears the end of his life, it seems not to be the end of the Bush dynasty. Jeb’s story is also one of privilege, shady connections, get-rich-quick schemes, using the Governorship to make millions, and taking post-Governorship payoffs from Wall Street for lucrative state actions. As Jeb Bush struggles and plans to steal the nomination from the convention, we must ask ourselves, “Do we really want another Bush in office? Why aren’t these people in jail?”

Reprinted from The Stone Zone.

Why Conservatives Are DangerousTotalitarian PC