At a Wednesday campaign appearance in Nebraska alongside Warren Buffett, Hillary Clinton jokingly asked her supporters to assure Republicans, “I don’t have horns.”

Of course, Hillary doesn’t have horns! Even the Devil knows cankles and cloven hooves are a more workable combination than horns and a wig. But we needn’t tear the candidate’s accessories off to verify. Horns, hooves, whatever – the marks of Satan cover our gal president wannabe top to bottom. 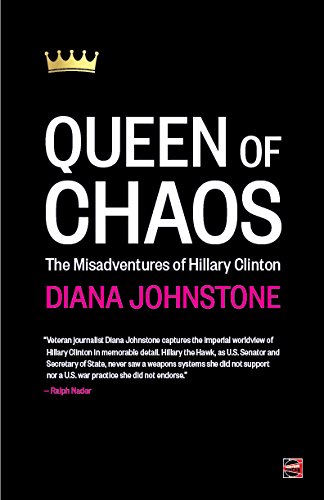 Trump added, “If you look at what she did with Libya, what she did with Syria. Look at Egypt, what happened with Egypt, a total mess. She was truly – if not the – one of the worst secretaries of state in the history of the country.”

Despite the media’s trumpeting every contrary Trump pronouncement, this particular Donald zinger wasn’t so much as allowed a seat in the parlor. There was no media follow-on anywhere. Not even a sighting or a hearing of liberal outrage.

But the Dems know that drawing any attention whatsoever to the appalling results of their candidate’s previous stewardship of U.S. foreign policy would be most unwise. But the Republicans? One would think they’d appreciate the Donald’s tidy summation of Madam’s diplomatic career. But, no. Other than Trump himself and Rand Paul, every Republican presidential candidate is a warmonger.

Once again, the stupid party has shot itself in the foot. Republican candidates have left themselves no ground from which they might attack their near certain opponent’s greatest weakness, i.e. responsibility for the death and displacement of millions and the ruin of numerous countries that never threatened the United States for even a nanosecond at a cost to taxpayers of many trillions. Consequently, nearly the entire Republican bestiary has nothing to say other than that Hillary didn’t kill enough people.

As was, the Libyan free-for-all was the consequence of a scheming woman’s vainglory and the “smart power” of the vanguard of the coming hagiocracy should Hillary’s forty plus-year hobby of getting herself elected POTUS by riding the coattails of her errant husband finally pay off. I am referring here to Samantha Power, Susan Rice, Cheryl Mills, Suzanne Nossel, and Victoria Nuland. (My sympathies, gentlemen.)

In such circumstances, it’s no surprise that the legacy media’s focus is on the minutia of Hillary’s private server and email caper while

serving as Obama’s Secretary of State. By lasering in on the mind-numbing details of her defiance of Department of State rules regarding restricted documents and government property (employees’ email communications,) the public is understandably confused and bored to distraction. (For informed comment on Hillary’s emails, see here.)

The big picture is never addressed. No discussion of the candidate’s bungled gun-running that led to the deaths of three Americans or the rise of an indirectly US-armed ISIS via Hillary-promoted and -approved weapons sales to Qatar. Not a whisper of the aforementioned looting of Moammar Gaddafi’s remaining armory on ISIS’s behalf and from which the unhappy indigenous now trapped in a years-long civil war are still suffering. I suppose it’s considered vulgar to discuss Hillary’s establishment and operation of a shadow Department of State under her sole control since no one in the lamestream media will take up the subject. No mention either of the innovations hidden here and there, whose development several George Soros-funded enterprises aided and abetted.

Whenever Hillary mounts her fatuous argument that her election will be a victory for women everywhere, it’s impossible not to cringe. Such an argument coming from a person, who is, to date, the most successful female widow maker and orphan manufacturer in all of recorded history is but another funhouse mirror on our political carnival’s concourse. Even if Salvador Dali, the master of the surreal, were still living, the artist could not get all the candidate’s lies and hypocrisy into one painting. Not even a triptych would do. Nothing less than a Monet-like obsession with painting water lilies would be required to capture the full gamut of Hillary’s crimes of empire.

The thought that in a little over a year Hillary might control the U.S.’s nuclear arsenal is sobering. Taking into account that her personal bête noir, Vladimir Putin, would be standing directly in front of her already smoking pistol is even more troubling, as if that were possible. Putin, the leader of a nuclearized world power whose smash-up has long been the globalists’ penultimate goal before the expected hogtying of China, and who enjoys the nearly unanimous support of the Russian people, is a man whom Secretary Hillary likened to Adolph Hitler. Upon his first year in office, Senator Clinton chirped mindlessly – ex cathedra – that President Putin is a man who has “no soul,” being as he

is a former intelligence officer.

“How,” Peter Lavelle, the host of RT’s always lively Crosstalk broadcast, wondered some months ago, “do you sit down and talk with someone after their having said that?”

Good question, but I would suggest “slowly and very, very carefully.”

(An aside: The Kremlin was careful to keep our stumpy La Brigada out of Putin’s line of sight, leaving her as Foreign Minister Sergei Lavrov’s special burden to bear. Okay, okay. This may have been, but probably wasn’t, on the basis of aesthetics.)

No surprise then at Trump’s exclamation to Chris Wallace after Hillary’s attempted Twitter smack-down in response to the Donald’s call for a temporary pause in Muslim immigration, “And she calls me ‘dangerous’?”

Fortunately there is an excellent new tool to counter both the media’s selective Trumpery and its near universal neglect of Hillary Clinton’s subterranean orchestration of massive crimes against the people of the Middle East, North Africa, Europe, Ukraine and Russia, all committed in the name of the American people and on their dime.

I refer to Diana Johnstone’s magnificent The Queen of Chaos: The Misadventures of Hillary Clinton.  This recently released book is, in fact,

more than a book. It is a public service. While other talented authors (here and here) have written up Hillary’s influence peddling, dodgy financial empowerment, and her and her husband’s war on Bubba’s sexual victims, no one has heretofore focused solely on Hillary’s foreign policy career.

With a brisk yet thorough economy, Ms. Johnstone doesn’t miss a stitch while weaving  Hillary’s contribution into the historical tapestry of America’s murderous, nearly three decades-long global re-design. It’s all there; the expansion of Nato, the rise of think tanks as the personal power loci of the very rich along with that of the repellent, Israeli-first neocons, America’s fraudulent “humanitarian interventions,” the abuse and persecution of whistleblowers, and the still-evolving, liberty-sucking, corporatist Trans-Atlantic Free Trade Area (TAFTA.) From Bill Clinton’s championing of a Muslim Bosnia in the heart of what was a Christian Europe with a gut-wrenching attack on what was Yugoslavia, Josip Tito’s hard-won, post-World War II Balkan miracle, followed by the debilitating occupation of Serbia, to Honduras, Rwanda, Iraq, Libya, Syria and Ukraine, the most pertinent elements of each story can be found in Queen.  (For a more detailed review click here.)

I personally found Ms. Johnstone’s chapter, The Taming by the Shrew, particularly rewarding. Invoking the awful legacy of the truly terrible and slightly absurd “tough gal” Madelaine Albright, the author swiftly outlines the rise of Hillary’s Team of Harpies, and the subsequent subsuming of what traditionally has been the quiet and maximally polite world of diplomacy into one of cheap and ill-informed personal insults directed at foreign counterparties. If we’re lucky, this ugly, unnecessary and unproductive syndrome may prove to be Hillary’s one policy legacy. That could at least be corrected. (Couldn’t State scrap happy hour and just contract with a local Ladies’ Auxillary to organize a year’s worth of Thursday afternoon high teas in the diplomats’ lounge?)

the U.S. has assaulted militarily, particularly Libya, today a smuggler’s paradise, and a besieged Syria, home of Libyan (and CIA-supported Turkish) smugglers’ most desperate client pool. It’s a pity but last summer’s events, which clarified the miserable migrants’ intended role in America’s planetary re-design, had not yet occurred when the author’s manuscript was sent to the printer’s.  (Readers can catch up at the links above.)

Hat’s off to Ms. Johnstone, a seasoned and super-informed, hardworking journalist, who in the course of just doing her job and doing it well has provided all of us who support liberty and decency and want only peace and prosperity with an overflowing tool box for use in the task before us.

And what task is that?

What is the bottom line here?

Russia and the post-Cold War world have long been subjects of Ms. Williamson’s journalism. Write to her at [email protected].