On the ISIS Terrorist Threat

The panic in the western world, since the attack in Paris, where approx. 130 were killed is quite over the top.

Walking home Friday evening, at the corner of Montgomery and Second St., in San Francisco, I winessed train passengers rushing out of the underground train station. Police were rushing in. Someone had heard a “pop.”

The panic has spread to small towns:

And a plane headed to San Francisco was diverted because three men “suspiciously” swapped seats with each other:

The flight landed at Kansas City International Airport around 7:50 a.m. The flight crew made the decision to divert the flight when several passengers did not follow takeoff instructions and continued to display suspicious behavior during the flight.

After the landing, all passengers were deplaned and three people were questioned by police. As a further safety measure, K-9 teams checked the airplane. It was re-boarded after the search and released to continue on its flight plan around 9:20 a.m….

[C]oncern began when flight attendants were making their pre-flight announcements and the three men seated in the last row acted suspiciously. “That part of the debrief at the beginning, they had gotten out of their seats and had swapped seats in the middle of that particular section and that was something that created an issue,” …

After about an hour on the ground, baggage was rescreened and passengers were allowed to re-board.But three men were missing. “They were not in line with us to re-board,” Lee said…

After questioning, the three men were rebooked and allowed to continue on later flights.

While the slaughter in Paris was horrific, it should be kept in mind that many more pedestrians die each year in the US as a result of getting hit by automobiles.

According to the National Highway Safety Administration, in 2013 there were 4,735 deaths caused by pedestrians being hit by cars.

Yet, remarkably, the government hasn’t banned crossing the street.

The world is a very complex place and it is not always safe. Most people, one would think. would prefer being allowed to choose their own level of risk taking.

Yet, governments are acting in France and Belgium as though a one size fits all risk tolerance must be implemented and that the tolerance level for its citizens, when it comes to terrorist risk, is near zero, and, of course, state power has expanded because of this mentality.

The emergency bill will, among other things, extend new powers to the police, ostensibly for preventing terrorism through increasing the legal room available for them to make searches and seizures, as well the ability to place citizens under house arrest.

French advocacy group La Quadrature du Net described the extension as “unjustified” by any reason “other than to circumvent the principle of separation of powers. Since the beginning of the emergency last Saturday, many searches are conducted for administrative cases under common law, with no connection to the fight against terrorism, and foreshadow a police state that the extension of three months the risk of trivializing”.

French security forces have conducted over 400 raids since last Friday’s terrorist attacks, and have made 60 arrests.

Things are worse in Belguim: 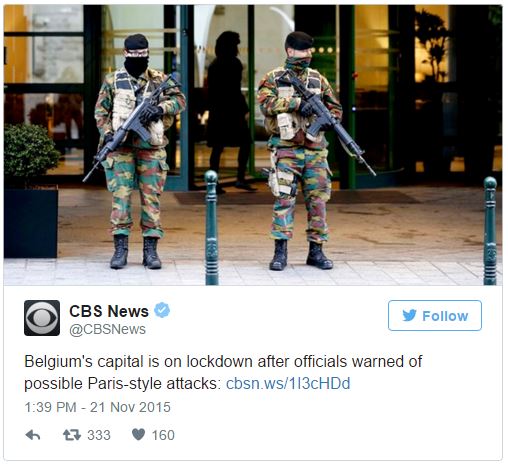 And here in the US, we have everyone from the neocons to Donald Trump hyping up the masses:

This is all occurring despite the fact that the terrorist attacks, to date, have been very low level operations. They have not resulted in anything close to the number of people killed in the Middle East by US bombings, blockades, military actions and drones. If you are wondering what shock and awe is really all about, think about the Middle East and the panic that is going on in many of those countries.

And don’t forget the curious horrific attack in Afghanistan by a US AC 130 gunship on a Doctors Without Borders run hospital. The hospital was bombed 5 times within an hour.

Still the panic is here, even though, one would think it is quite easy to remove oneself from risk,with no help from government,  if one really were concerned. Just stay away from large crowds, theaters, sporting events, malls etc.

I will be doing none of this because I do think the risk is extremely low, even though San Francisco may be on a terrorist list as a potential target (Though it does probably make a little sense to stay away from a very high profile event, such as the Thanksgiving Day parade).

But the fact that no one seems to be moving out of New York City and Washington D.C. suggests a disconnect. Most see little risk when it comes to their individual situation. Yet, they want the government to do something about the “threat.”

When you start to see streams  of people flowing out of NYC and DC, the way you now do in Syria, you will know they have real concerns. Until then, it is all about government hype scaring people, and the government pretending they can stop all attacks, despite the fact that terrorist attacks are by their very nature extremely difficult to detect and it is why they are the preferred method of attack by the militarily weak.

To the degree a business believes it is more vulnerable to attack, such as a shopping mall or stadium, it is best we leave the security for such businesses to those who run them. This is the only way we will get creative in protection against terrorists, and at the same eliminate the brute security measures now on display in Belgium and France, which only lead to government abuses of power.

The big problem in America and Europe right now is not terrorism, it is handing over the keys to our freedoms to governments who hype up the threat and mislead as to what they can actually do to stop terrorism. Further, to the degree government officials use the terrorist attacks to call for wars in far off lands, they are fueling the flames that will cause even more to burn with terrorist rage.

The ultimate solution to terrorism is to shrink government. Foreign military adventures must be stopped and domestic regulations and handouts must be ended. It is a myth to think the terrorists are just religious fanatics. It is a myth spread by the warmongers.

The female killed during a police raid in Paris at an apartment of the terrorists was Hasna Aitboulahcen. Reports NyPo:

Neighbors told the Times of London that Aitboulahcen was considered a bad Muslim, and a female friend said she once caused a scene while wasted in a German nightclub.

“She got very drunk and sprayed tear gas around the whole place,” the pal said.

“Basically, she just got angry with a guy who was trying to chat her up and became furious.”

“I think she had a very disturbed childhood, and she had a lot of problems. She really did drink a lot,” the woman added.

Another friend, Amin Abou, 26, described her as a “party animal who loved clubbing.”

“She drank alcohol and smoked and went around with lots of different guys,” he said.

And the Sunday Times of London fills us in on the terrorist currently on the run:

Twenty-six year-old Belgian Salah Abdeslam, patrons of a gay bar in Brussels told The Sunday Times of London, that he was a regular there — known for boozing, smoking hash and flirting with other men.

“We had him down as a rent boy,” a bartender named Julien said of Abdeslam, who’s been on the run since the Nov. 13 attacks on Paris.

Others said he was known for long days playing video games in the bar owned by his killed terrorist brother Brahim in the poor Brussels suburb of Molenbeek.

The brothers’ tastes would appear to make them unlikely ISIS extremists. The terror group brutally punishes homosexuality — often hurling gay men off buildings or stoning them to death — and alcohol or drug use.

To be sure, both Aitboulahcen and Abdeslam turned “religious” in the weeks before the attacks, but it is clear we are dealing with lost souls frustrated in not seeing a way to success, blocked from success in many ways by government, and to repeat, a government bombing their homeland.

It is time to get government out of the picture on many levels. The breeding of terrorist savages by governments must stop. Freedom is the answer, not further clampdowns on freedom—on all of us.

Don’t fear the terrorists, fear the government that will take away your freedoms in the name of protecting you from terrorists.

Previous article by Robert Wenzel: You Should Die

How To Stop Running Over Blind People Planning on Hitting the Retail Stores?