The Summit was created in 2006 “to provide a forum to help inform and mobilize citizens across America to preserve the bedrock values of traditional marriage, religious liberty, sanctity of life and limited government that make our nation strong.” CNN described it as “one of the conservative movement’s marquee annual events” and Sean Hannity called it “the premier conservative event now in the country.” This year’s event featured old guard conservatives like Bill Bennett, Gary Bauer, and Oliver North as well as current Republican presidential candidates Lindsey Graham, Marco Rubio, Bobby Jindal, Ted Cruz, Rick Santorum, Mike Huckabee, Ben Carson, and Donald Trump.

For the third straight year, Ted Cruz won the Values Voters Summit presidential straw poll. Of the 1,161 conference attendees voting, he received 408 votes, or 35 percent. The complete results are as follows: 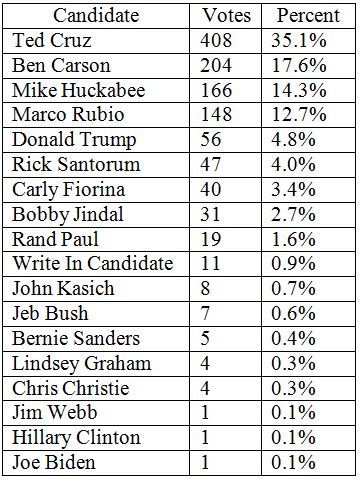 I don’t question the focus on family values, religious freedom, and social conservatism that was everywhere evident at the Values Voters Summit. As a conservative Christian, I am firmly committed to these ideals. What I do question is including support for the U.S. military and a belligerent foreign policy as a conservative value.

The speaker’s topic at an early morning breakfast on Saturday, September 26, was “Saving Religious Freedom in Our Military.” Apparently, “The men and women who risk their lives to protect our freedom are losing their religious freedom to politically correct officials and activists.” Too bad this is the only problem that religious people have with the military.

At the morning plenary session on Saturday, September 26, there was “A Generals’ Discussion on National Security” featuring:

Boykin is the general who all but claimed that the war in Iraq was a Christian crusade against Islam and that Islamic extremists hate America “because we’re a Christian nation.” I was not there, but I would be willing to bet money (if I were a gambler) that the concepts of “blowback” and “nonintervention” were never discussed by any of these generals.

That Ted Cruz—who has never been in the military—was again the winner of the presidential straw poll says volumes about what the attendees of the Summit think about the military and U.S. foreign policy.

Before the Summit, Cruz made some of the most radical and belligerent statements about the Iran deal that I have ever heard. Back in July he stated:

If this deal is consummated, it will make the Obama administration the world’s leading financier of radical Islamic terrorism. Billions of dollars under control of this administration will flow into the hands of jihadists who will use that money to murder Americans, to murder Israelis, to murder Europeans.

And just a couple of weeks before the Summit, at a rally outside the U.S. Capitol to express opposition to the Iran deal, Cruz said that if the deal goes through, it is an “absolute certainty” that “Americans will die, Israelis will die, and Europeans will die” as a consequence. Cruz then asked senators who support the deal: “Do you value the lives of millions of Americans?”

This rhetoric was continued in his speech at the Summit:

The fourth thing I intend to do on the first day in office is rip to shreds this catastrophic Iranian nuclear deal. (Cheers, applause.) The single greatest national security threat facing America is the threat of a nuclear Iran. I got to tell you, I can’t wait to stand on a debate stage next to Hillary Clinton — (cheers, applause) — and to make very clear to the American people, if you vote for Hillary, you are voting for Iran to acquire nuclear weapons. (Applause.) And if you vote for me, under no circumstance will a nation led by a theocratic ayatollah who chants death to America, under no circumstances will Iran be allowed to acquire nuclear

Cruz also maintained in his speech that after he is elected president: “We will rebuild our military. We will honor the commitments made to our soldiers and sailors and airmen and Marines. (Cheers, applause.).”

So, what does this say about the 35 percent of conservatives at the Values Voters Summit who want Ted Cruz to be president? Either they hold the same conservative values as Ted Cruz when it comes to the military and foreign policy or they don’t think these things are important. Perhaps they just don’t even care.