Gateway to Catalan Republic: 1.4 Million Rally for Independence in Barcelona

At least 1.4 million of Catalans have filled the streets of Barcelona, calling for secession from Spain, as the region prepares to go to the polls in what local politicians say will serve as a proxy vote for independence.

The massive pro-independence rally, called under the title “Gateway to the Catalan Republic” (Via Lliure cap a la República Catalana) is taking place in Barcelona, the regional capital, on Catalonia’s national Day, September 11. 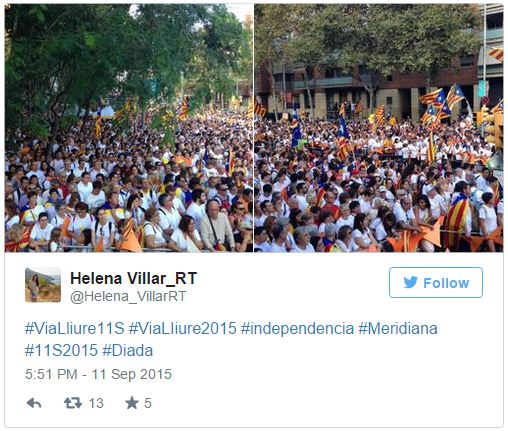 About 500,000 people registered on social networks to participate in the pro-independence event, Jordi Sanchez, the president of the Catalan National Assembly (ANC), told Sputnik news agency on Friday. However, photos and videos from the scene suggest that many more people had flooded into the streets of Barcelona.

Sanchez said he believed the rally will be one of the largest in Catalonia’s history. 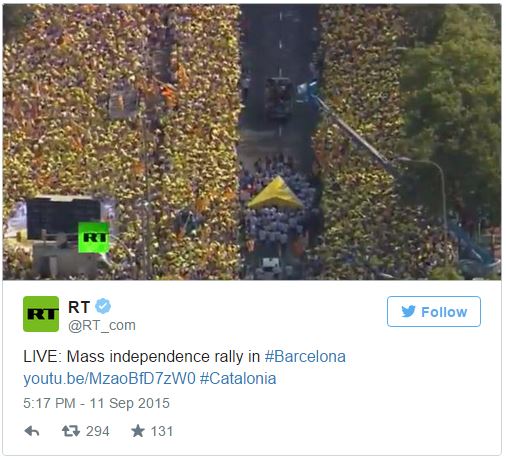 The rally, carried out under the slogan “Let’s start building a new country” saw people coming to Barcelona from all parts of Catalonia by car, buses and rail. 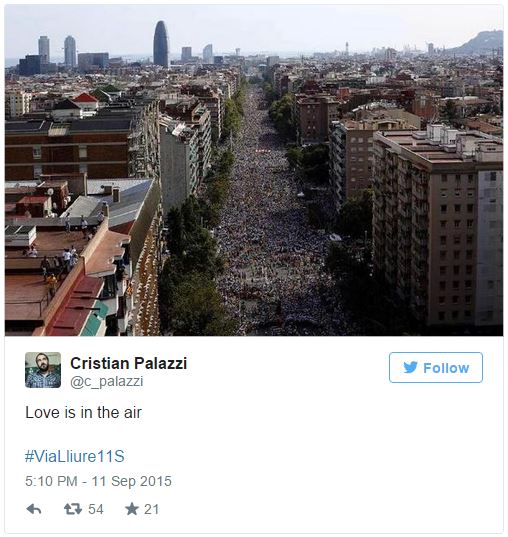 The rally has stretched along one of the city’s main avenues the Meridiana, which starts from the outskirts of the city, heading to the Parc de la Ciutadella. People waving national flags, “estelada” in the Catalan language, are moving towards the parliament building in the park. 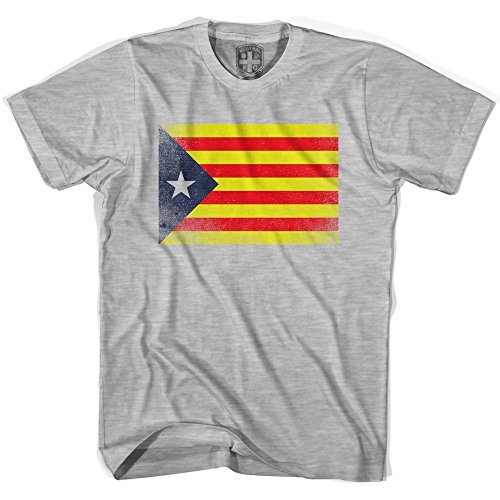 The demonstration is taking place on the same day as the kick off of an electoral campaign that has been framed as a de facto vote on the region’s secession from the rest of Spain. Catalonia’s regional election is to take place on September 27.

The “Together for Yes” (‘Junts pel Sí’) coalition is expected to win a majority of at least 68 seats in the 135-seat regional assembly.

Catalan President Artur Mas said on Friday that he would rather count “votes instead of seats,” but “all attempts to organize a referendum have been blocked” by the Spanish government, the Catalan news agency reported.

Mas, who is running with “Together for Yes,” said the election is the “only legal option” left to Catalonia to find out how many people are in favor of independence.

“If we win, if we have a majority of MPs, we will be open to negotiate with Madrid, Brussels and all European capitals in order to get an 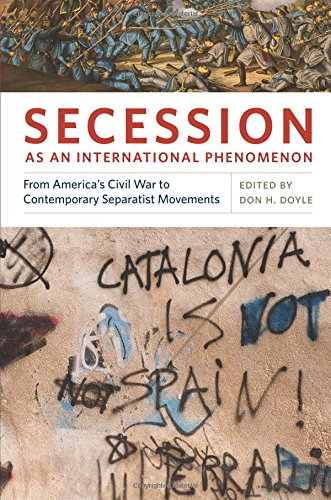 agreement. We’ll have a positive attitude,” he said.

The organizers said Friday’s rally is an attempt to show the will of the vast majority of the Catalan people and a last plea for a referendum on independence from Spain. The demonstration is “to be the last one with a vindicatory purpose,” said Carme Forcadell, former president of the ANC.

Historically Catalonia has been one of Spain’s better-off regions, accounting for one-fifth of the country’s economic output. The local population has been dissatisfied with their taxes being used by Madrid to support poorer areas of the country.

Spanish Prime Minister Mariano Rajoy has said that Catalonia’s secession would be illegal, while EU officials have warned Catalonia that it would have to leave the bloc if it seceded.