Joe David, a former California Highway Patrol officer, has made a considerable fortune by teaching police officers who to steal under the color of “law” through his “Desert Snow” consulting firm. When he arrived in Meridian, Idaho for a two-day “asset forfeiture” seminar on August 10, he probably didn’t expect to be greeted by protesters. It is to his credit that he took advantage of the opportunity to speak with them, especially in light of the fact that the conversation couldn’t have been a pleasant one for him.

“You come up here to Idaho teach teach our officers to be more effective at a very bad concept,” complained activist Daniel L.J. Adams, who helped organize the “No More Road Pirates” in Idaho protest outside the Peace Officer Standards and Training academy in Meridian.

“What do you find `bad’ about it?” inquired David, pretending that summary confiscation of money and property from people not charged with an offense somehow abates the menace posed by criminal cartels. 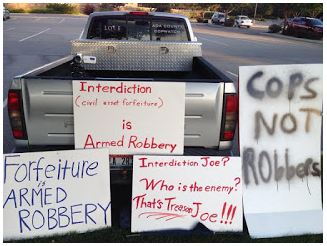 Welcome to Idaho, Joe David: Signs at the “No More Road Pirates in Idaho” demo.

“It’s stealing people’s stuff!” exclaimed Adams, mildly astonished at the need to state a self-evident truth. “How do you get the sense that stealing stuff, through whatever inverted legal means that you can, make it morally legit?”

“It’s been around since, like, 1700,” David responded, ignorant of what he conceded in that blithe reply – and what it says about the role he plays and “Civil asset forfeiture,” as practiced by contemporary American law enforcement officers (and taught by the likes of Joe David to officers both here and abroad) is close kindred to many of the abusive practices of his colonial-era antecedents who confiscated property and harassed innocent people in name of the British Crown. Acting through specially constituted “admiralty courts” in which due process rights were ignored, and the plundered property itself was prosecuted, colonial customs agents would routinely seize shipping cargoes, store inventories, and money as “deodands” (things “given to God”).

Colonial patriots reacted to this practice by introducing colonial officials to the decorative properties of bitumen and goose feathers, and then by shooting and killing the troops sent to police the restive colonies.

The congressional draft of the Declaration of Independence explicitly condemned asset forfeiture, accusing the Crown of undermining the law “with the allurements of forfeiture and confiscation of our property.” The Due Process provisions of the Fifth Amendment were directly inspired by the Framers’ revulsion over the criminal practice of which Joe David boasts such a venerable pedigree.

During his conversation with David, Adams noted that forfeiture operations are carried out by specialized “interdiction units.” Interdiction “is a military term for cutting off and destroying an enemy’s supply lines,” Adams pointed out – which means that every time a police officer escalates a traffic stop into a drug-related search, he is participating in a literal war on the public.

Impenitent, David insists that this war is justified by the need to “dismantle criminal enterprises…. You have to take apart the infrastructure, you have to take their goods, their houses, their cash.”

Even granting the untenable assumption that the use and sale of narcotics should be treated as criminal offenses, the approach David defends is, as Adams reminded him, nothing more than “stealing people’s stuff.” Confiscation of money and property through criminal forfeiture – that is, following an actual conviction – is a different proposition. As it happens, that approach is much less profitable for police agencies and prohibition privateers like Joe David and his “Desert Snow” racket.

For more than a quarter-century, Joe David and his comrades have been tutoring police in the art of highway robbery, and his reward is a lifestyle many crime lords would envy. Given government’s role as what Justice Louis Brandeis called “the potent, the omnipresent teacher,” it shouldn’t be considered surprising that some criminally-minded people within the general public have sought to emulate the behavior of the overseers in the coercive sector.

On July 23, three members of a border vigilante group that offered to assist the Border Patrol were indicted for practicing “asset forfeiture” without a license – that is, plotting to steal narcotics and cash from drug cartels in Mexico.

A criminal complaint filed by FBI Special Agent John E. Kelly accuses Parris Frazier, Robert Deatherage, and Erik Foster of conspiring to possess and distribute “five kilograms or more of a mixture … containing a detectable amount of cocaine” and derivatives of that controlled substance. The suspects, who belong to a private militia called the “Arizona Special Operations Group,” obtained the contraband from an undercover FBI agent as part of a federal false-flag operation.

On January 24, Frazier was stopped by Border Patrol agents operating an internal checkpoint. Explaining that he “wanted to assist Border Patrol in stopping illegal border activities,” Frazier “asked for information on the illegal activities they had seen lately,” narrates Kelly’s criminal complaint. The agents claimed that they had been working with an informal source but could no longer do so. Frazier “expressed his interest in contacting the source” in order to conduct his own investigation.

Several weeks later, the undercover FBI agent, “posing as the informal [Border Patrol] source,” contacted Frazier. During a covertly recorded conversation, Frazier allegedly told the provocateur that “he had a small group of patriots that he trusted and they were trying to take care of (steal) anything that came up out of Mexico (drugs) or was going back into Mexico (bulk cash),” and that, predictably, “they preferred the cash loads going south.” Frazier promised the undercover FBI agent “a percentage of whatever is taken” from the narco-couriers.

During a second recorded conversation on March 4, Frazier reportedly told the FBI agent that he and his colleagues would be willing to “dispatch” – that is, kill – “all of the individuals guarding the cash to ensure that his guys go home at night.” Although he had specified that none of his associates were “tied up in law enforcement,” their policy regarding lethal force apparently was modeled on the familiar “officer safety uber alles” paradigm.

In recorded phone calls over the next several weeks, the FBI agent outlined a plan to steal thousands of dollars from a vehicle that was supposedly owned by a cousin in the employ of a drug trafficker. This led to an attempted “rip” by Frazier and a partner on April 2: FBI surveillance captured the suspects, dressed in camouflage, wearing facemasks, and carrying AR-15s, search the Bureau’s “bait car” in a fruitless effort to steal money that wasn’t there.

A follow-up phone call from the informant added new details to the fabricated story by claiming that cartel members had found $8,000 in the vehicle, but that the miscreant cousin had stolen $12,000. Unwittingly playing the role scripted for him, Frazier allegedly told the informant: “How about I lay an offer out on the table that we just get him [the cousin] out of the way for you.” The informant suggested that Frazier and his partners do at last one more cash “rip” before discussing a hit on the mythical cousin.

On April 23, Frazier and his companion seized $7300 from a second FBI “bait car” that was said to be carrying $20,000. Once again, the informant claimed that the cousin had confiscated the rest while driving the “cartel vehicle” to a pre-designated drop.

Artfully stringing Frazier along, the informant continued to discuss the possibility of a murder-for-hire targeting the nonexistent cousin. In the meantime, he told Frazier, it would be possible for him to steal a northbound cocaine shipment. Frazier and the other two suspects were directed to a warehouse in Phoenix where they found a Hyundai Tucson containing “one package of actual cocaine weighing approximately one kilogram and nine packages of cocaine stimulant [sic] that also weighed approximately one kilogram each.”(Emphasis added.)

Although the FBI criminal complaint dishonestly refers to the quantity as a five-kilo “mixture,” the single kilo of cocaine was packaged separately from nine kilos of cocaine substitute. By arranging for the suspects to find the ten-kilo “mixture,” rather than the single kilo of “actual cocaine,” the FBI made it possible to charge them with offenses that carry a mandatory 10-year prison sentence, and fines of up to $10 million.

As they drove away from the warehouse, Frazier and his comrades were intercepted by an FBI SWAT team. They briefly managed to evade several police vehicles but were kept under surveillance by an FBI aircraft, which tracked them to the home of Frazier’s girlfriend. The suspects were arrested, and firearms found in the home during a search were “seized as evidence.”

By seeking to confiscate drug proceeds at gunpoint, Parris Frazier and his friends behaved in a fashion indistinguishable from government-authorized “narcotics interdiction” patrols – especially by expressing a preference to confiscate southbound cash deliveries, rather than northbound drug shipments.

In the state of Tennessee, where police departments have been permitted to retain 100 percent of the cash stolen through “civil asset forfeiture,” Interstate 40 has been designated a high-impact narcotics area. However, the most coveted patrol area is the westbound lane, because of the assumption that narcotics flow east and cash flows west. Competing law enforcement agencies have literally come to blows over jurisdictional claims on the most profitable sections of I-40.

The ends pursued by Frazier and his colleagues, and the means they employed, didn’t differ materially from those of government law enforcement and intelligence agencies – but they lacked official authorization to conduct highway robbery.

Ironically, the same was true of Joe David’s involvement in an “interdiction task force” operated by District Attorney Joe Hicks of Oklahoma’s Caddo County. In July 2013 (as previously reported here), Hicks was forced to disband the unit, which included David himself and several other private contractors associated with Desert Snow. On one occasion, David – who was wearing a sidearm, but not a certified law enforcement officer — pulled over and interrogated a pregnant woman on I-40 and interrogated her at length.

Hicks told The Oklahoman Newspaper that he had hired David and his sidekicks “because his drug task force had little success on drug stops” and because “he hoped to make money for his office from the drug stops because of a loss of federal funds.”

David and Desert Snow were allowed to keep a 24 percent cut of the plunder. Desert Snow’s take was $40,000, with another $212,000 in the pipeline when Caddo County Special Judge David Stephens shut down the racket.

As he ordered David never again to conduct “interdiction patrols” in his county, Judge Stephens told him that “if you do, I hope to see you soon, wearing orange.”

No instrument yet devised by the intelligence of man can detect the moral and legal difference between what Joe David and his comrades were doing in Oklahoma, and what Parris Frazer and his buddies thought they were doing in the FBI-orchestrated false-flag operation.

Frazer and his pals face the prospect of years in a government-sponsored cage for mimicking the behavior taught by David and carried out by agents of the state’s crime cartel. David is no longer an accredited member of the state’s punitive priesthood, but as someone who teaches cops how to be more effective robbers he enjoys Blue Privilege-by-proxy.