15 Suggestions for the AR-15 “Assault” Rifle

A bit of history and background information first (it may help–if you are in a rush, then scroll down for the suggestions):

The M-16 (and its military variants) use a light-weight mid-sized cartridge that falls into the definition area between a U.S. Military main battle rifle (.308– 7.62mm x 51mm NATO  or 30-06) and sub machine gun (9mm and .45ACP) rounds and because the military version is select fire it is classed correctly as an assault rifle. The same for other rifles such as the as is the 7.62 x 39mm (AK-47 and smaller AK-74) firearms which also fire mid-sized cartridges and have select fire capability. The civilian AR-15 and variants that are NOT select fire are also NOT assault rifles! they ae simply semi-automatic carbines.

While here let’s clear up what AR means. It means Armalite Rifle, not automatic rifle. Amalite developed the gun. The AR was originally intended as a guard duty/security rifle for the Air Force but shortly it was shoved down the throats of all of our military in 1962 or so by Robert MacNamara the then Secretary of Defense (and one of the  so-called “wiz kids” at the time).

The new M-16 assault rifle was pushed into overall use by our military to replace the M-14 as a jungle warfare rifle since it was lighter, recoiled less, could be put on full automatic and controlled much easier (the M-14 on full auto was a real serious handful!) and troops could carry much more of the lighter ammunition. In Nam, the jungle fighting combat distances were much less than on an open battlefield such as in Korea or most in WWII where larger calibers also thrive compared to smaller calibers when it comes to penetration, power and range.

Pressure differences between the .223 Remington and 5.56mm cartridges mainly lie in in the following: The two rounds are pressure tested using different measurement standards with the military round being slightly higher in pressure and having a slightly thicker case than the .223. They are both generally interchangeable.

BUT–The “major” difference is the distance between where the bullet comes into contact with the rifling (called the throat or leade) This distance or fit is shorter in the .223. than the 5.56. This difference basically means if you have a .223 rifle and you load military 5.56 ammo. in it may cause the (tiny bit overall longer cartridge) military bullet to engage the rifling before the gun is fired. This tighter fit may cause pressures to go up a before the bullet leaves the cartridge case and that higher pressure could be a problem depending on the gun.

At the worse this excessive pressure could cause damage to the gun (if it is cheap), or create ruptured cases, blown primers, excess gas escape and potential harm to the shooter from the hot gasses if the case is ruptured.

But firing the “shorter” .223 in a “genuine longer military spec.” 5.56 chambered rifle should be no problem as the Milspec. 5.56mm throat is longer so there is no jamming of factory loaded rounds into the rifling prior to firing–unless a hand loaded round is too long, but we are talking factory loads here.

Generally there have been few problems with either of these scenarios, but it is something you should know–especially if you have an AR chambered only in .223 and you plan to shoot military ammunition in it.

The AR as a apocalypse or loss of the Second Amendment or freedoms is why AR=America’s Rifle were purchased in such huge numbers–citizens are arming themselves. The AR is well suited for civilian defense use. It has lower recoil, is easier to shoot and is smaller and lighter than more powerful main battle rifles such as the M1 Garand, FN/FAL, etc..

U.S. Army Sgt. demonstrates shooting an M-14 rifle to Iraqi Highway Patrol (IHP) police officers during close-quarters marksmanship training Nov. 17, 2006. this rifle in the civilian Springfield Armory M1-A variant delivers a serious long range high-powered high-energy and heavy penetrating hit to a target-but is not as easy to handle as an AR or as light. (Photo credit: Wikipedia) 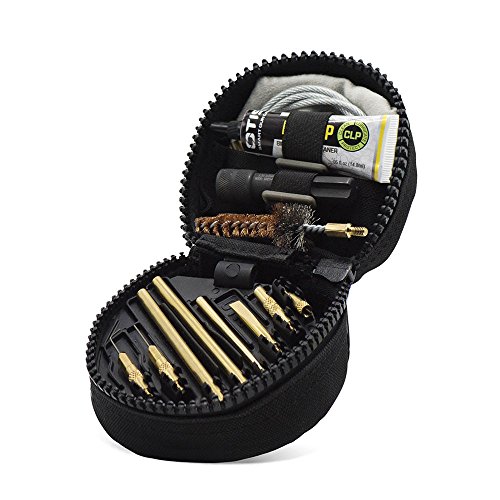 There have been rumors, and again the Internet is always correct as we all know, that some companies have stamped .223/5.56mm or just 5.56 on the barrel all the while “that rifle” is chambered only in .223. I find that hard to believe especially with the BATF  watching as well as the incredible liability it could mean (easily proven)–intentional deception on afactory gun=big time law suits.

Between  2010 and 2014 many tons of these rifles were panic purchased at some pretty high prices by people who feared potential firearm confiscation advanced by the dangerously liberal (or worse) Obama administration.

In fact, all it will take will be a national emergency and the (any) President is the person to declare what constitutes that event. Then citizens could or will be given a week or two to turn in all guns and ammunition to their local police or military facility or else if caught with any in their possession! Something all firearm owners should seriously consider–what will you really do? Burying or hiding a gun or any illegally declared item in this scenario is just dumb; some one will rat you out or it will be discovered (either is guaranteed). 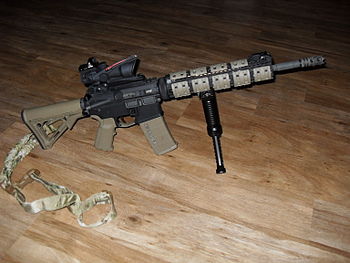 A customized AR-15 rifle with an ACOG sight. The secret is to keep things simple, note the floating barrel cheese grater forearm filled with anti-cut inserts-this is a bit overdone in my opinion,and a vertical grip that opens into a bipod. (Photo credit: Wikipedia)

Anyway, regardless of what kind and model of AR you may own there are some basics involved in getting it ready for serious use and within some reason, these basic 15 recommendations can be applied to other battlefield type firearms like the M1-A, FN or AKs for example. Let’s begin (finally):

1) Keep your gun in good shape, gas system and barrel clean (ya think?).

2) Have a sling or good carry strap to pack it for a distance.

3) Have a decent carry case for the rifle and accessories.

4) Have at least TEN 30-round magazines for each rifle you have and they should be fire tested for complete reliability.

5) Have at least 400-600 rounds of ammunition for each rifle in the event of a national emergency/apocalypse. The best is new U.S. military “surplus” for durability, storage and ultimately, feeding reliability in either the 55 grain ball or 62 grain (green tip) ball. Of course you can also have U.S. tracer and foreign incendiary if you can find it. And no the green tip is not armor piercing, the tiny 35 grain tip was designed to penetrate the 1980s Soviet tin battle helmet better than the 55 grain bullet–the green designates the bullet weight difference for NATO use.

6) Have a way to hold and/or efficiently mount or carry extra ammunition magazines. Magazines and ammunition stuffed in pockets is foolish for effective for rattle battle use.

7) Have iron sights on your gun should you damage any optic sights. If you use an optic lens scope we recommend a one to four or five power variable that will work without a battery such as one by Burris. The slightly higher power is nice for longer shots or recon while the one-power is best for close in work. And of course there are various “dot” and holographic sights and-it all depends on your wallet but simple is best for 99.999 percent of us.

And of course red and green LASERs. The green will use batteries much quicker and in many cases are low temperature sensitive-but they are easier to see. Thermal or “star light” type sights are great but decent ones are costly. Long range optical scopes above five or six  power on an AR are a poor choice on this short to medium range firearm. In the apocalyptic or national emergency world your opposition will be generally well under 400 yards, beyond that distance. During WWII it was established that enemy soldiers beyond 500 yards are just invisible to the average Joe’s eyes, especially in urban or normal growth areas. I would not shoot unless I had a .308 (or more) for the horsepower it provides. A gun mounted flashlight is ok but generally these are reserved for very short range use (in building use) and any light at night makes you a target in battlefield/survivor like environments.

8) This is not competition, a vertical grip is a good option for gun fighting. Mount it closer in towards the magazine rather than further out to get the best handling.

9) Picatinny rails and Picatinny forearms (I call them cheese graters) are overdone. Buy only what you will actually need as too much is a major dust catcher and could cut you given half the chance.

10) Standard looking (with a few options) and standard functioning guns are best for the apocalypse; heavy barrels and all kinds of competition junk, ultra tight fit guns or nifty competition type goodies on a battle rifle are a poor choice. When it comes to hard use over months or longer, fancy stuff and trick guns will crap out. Our military has some fancy stuff but they also have a massive support/repair/replace logistical operation too–you won’t.

11) A more extended and heavy-duty charging handle such as the ribbed model made by Tony’s Customs is a good and very robust option (keep the old one as a spare part of course).

12) A hand grip (pistol grip) that delivers much better and more accurate trigger control such as the fully adjustable Accu-Grip is definitely worth the money if operational accuracy through better trigger control is your goal.

13) Replacement parts (and parts kits) are a very smart thing to have-especially gas piston rings and springs; learn how to detail maintain or repair your rifle. Get one now, you will need it.

14) A combo tool to service the firearm.

15) Complete cleaning kit and learn how to use it effectively-I like some orange smelling stuff called SEAL 1 real effective in the gas system to keep it clean and easy to clean over hundreds of fired rounds.

I am sure there are other things, but and again I remind you, we are talking about real combat in a national emergency, survival or apocalyptic environment and fancy tight fitting precision guns weighting ten pounds or having all kinds of bells and whistles are ill advised in these deadly civilian population unsupported scenarios where it could be months or even many years before things get normal again-if ever.