A Review of Steyn’s Scathing New Book About Michael Mann: “A Disgrace To The Profession”

Yesterday, I received my advance copy of this book, and after spending about an hour with it, I Tweeted this:

Just received advance copy of book “A Disgrace to the Profession” from@MarkSteynOnline all I can say is: Mann, that’s gonna leave a mark!

And today, after spending a full day with it, that statement still holds true.

I remember when Mann decided to sue NRO and Steyn for defamation, and despite all the laughing at the time there was this prescient thought from Dr. Judith Curry: 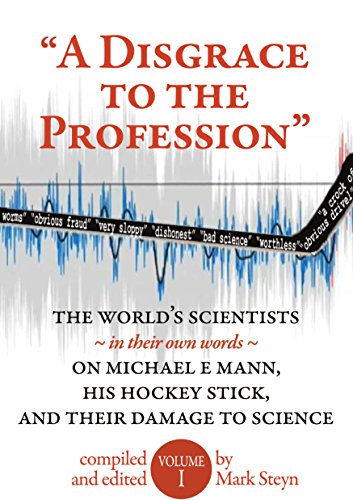 “Mark Steyn is formidable opponent. I suspect that this is not going to turn out well for you.”

Well, Part 1, or should I say, Volume 1 of that prediction is now in press. It’s a scorcher, hilarity, and a tale of science and politics gone awry all in one.

Steyn realized the word of a political pundit like himself can only travel so far in certain circles, and in a brilliant move, he has gathered a compendium of what other scientists have to say about Mann’s work on the “hockey stick”. And of course, he’s had it illustrated by Josh. My favorite is Mann as Yoda, wielding a hockey stick rather than a light saber, seen in this collage below:

The book has twelve chapters plus an introduction, prologue, and a postscript. In it. You’ll find quotes from scientists like this one:

The Best of Anthony Watts