One might get the impression from reading Senator Mike Lee’s new book that he and his fellow Republicans in Congress who talk about the Constitution actually believe in following it. And the same could be said for the conservatives who endorse the book on the back of its dust jacket: Glenn Beck, Mark Levin, Edwin Meese, and Larry Arnn.

This doesn’t mean that Lee has not written a good book. He has, or at least the first part of his two-part book is good. And, to give credit where credit is due, Lee is one of the “better” conservative Republicans in the Senate, 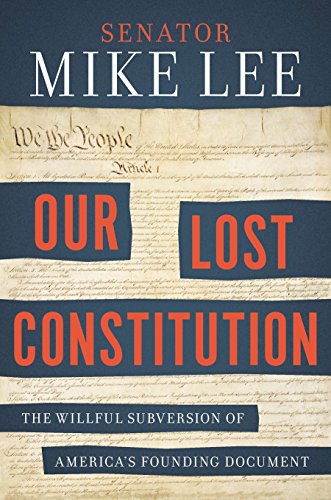 although that may not be saying much since, after all, this is Republicans we are talking about. Lee is a smart guy from a prominent family. His father was the founding dean of the Brigham Young University’s law school and later the president of the university. (Yes, the family are Mormons.) His father also served as an assistant U.S. attorney general and the U.S. solicitor general. Lee himself received a degree in political science from BYU, graduated from BYU’s law school, and served as a law clerk for Samuel Alito both before and after Alito became a Supreme Court justice.

So, about the book. After an author’s note, introduction, and first chapter that is really more of a continuation of the introduction, the book is divided into two parts: The Lost Clauses and Reclaiming the Lost Clauses. The lost clauses of the Constitution are the “origination” clause in Article I, sec. 7 (chap. 2), the “legislative powers” clause in Article I, sec. 1 (chap. 3), the “establishment” clause in the First Amendment (chap. 4), and the “commerce” clause in Article I, sec. 8 (chap. 6). Chapter 5 is about the Fourth Amendment as a whole. Chapter 6 also relates to the Tenth Amendment. Chapters 7 through 10 are about reclaiming the Constitution through the Courts, through legislation, through the congressional power of the purse, and through individual action. The book concludes with acknowledgments, notes, and an index.

Lee continues in his first chapter his criticism of those who ignore and distort the Constitution. “The Constitution is being subverted by many of the very people who have solemnly promised to protect it,” says Lee. When he arrived in Washington, D.C., Lee “found it awash with people who viewed the Constitution as a nuisance.” Lee condemns all three branches of government:

He criticizes George W. Bush and even his fellow Republicans: “Although the GOP purports to stand for principles of constitutionally limited government, not every Republican lawmaker is willing to engage in a thoughtful constitutional dialogue—one that attempts to identify limits on federal power.” What Lee writes here sounds like things I have written in my many articles on the government and the GOP—too bad he acts like he doesn’t understand the Constitution either.

Lee is a great story teller.

In chapter 2, Lee tells the story of the role of the “origination” clause (“All Bills for raising Revenue shall originate in the House of Representatives”) in “the compromise that saved the Constitution.” He goes on to explain how H.R.3590, the “Service Members Home Ownership Tax Act of 2009,” was transformed by the Senate into the collection of tax increases masquerading as a health-care law known as Obamacare, thus violating the Constitution’s “origination” clause.

In chapter 3, Lee tells the story of how the adoption of the “legislative powers” clause (“All legislative Powers herein granted shall be vested in a Congress”) thwarted Alexander Hamilton’s plan for “an elected monarch” and

“executive for life.” He then explains how Franklin Roosevelt was able to get Congress to “delegate away its power, creating a host of agencies that would make rules to govern the American people.” Lee goes on to criticize the vague language of legislation like the Clean Air Act and the Clean Water Act as examples of how this leads to federal agencies like the EPA legislating through the regulations they decree.

In chapter 4, Lee tells the story of how former Klansman Hugo Black hijacked the “establishment” clause (“Congress shall make no law respecting an establishment of religion”) in writing the opinion in the Supreme Court case of Everson v. Board of Education (1947) to erect “a wall of separation between church and state” that the Constitution never intended.

In chapter 5, Lee tells the story of how the opposition of Englishman John Wilkes to King George III relates to the Fourth Amendment of the Constitution (“The right of the people to be secure in their persons, houses, papers, and effects, against unreasonable searches and seizures, shall not be violated, and no Warrants shall issue, but upon probable cause, supported by Oath or affirmation, and particularly describing the place to be searched, and the persons or things to be seized”). He goes on to explain how the NSA’s spy program violates the Fourth Amendment.

In chapter 6, Lee tells the story of how President Andrew Jackson vetoed an internal improvements bill pushed by Senator Henry Clay because he believed the power of the federal government was limited by the Tenth Amendment (“The powers not delegated to the United States by the Constitution, nor prohibited by it to the States, are reserved to the States respectively, or to the people”) to just what was expressly delegated to it by the Constitution. He then contrasts Jackson with Franklin Roosevelt, who “believed the federal government was empowered by the Constitution to do anything he deemed to be in the best interests of the nation, regardless of whether the authority to legislate on certain matters had been reserved for the states.”  Roosevelt’s New Deal “relied on a revolutionary interpretation” of the “commerce” clause (“To regulate Commerce with foreign Nations, and among the several States, and with the Indian Tribes”). The result of this is that Congress has “passed laws regulating almost every aspect of economic life in America, no matter how local in nature the commerce.”

As mentioned earlier, the first part (The Lost Clauses) of Senator Lee’s book is good. The same cannot be said, however, about the second part (Reclaiming the Lost Clauses). Lee naively thinks that the Constitution can be reclaimed by the very agents of government that have destroyed it and regularly violate it.

Lee believes that the Supreme Court decision in the Heller gun case “restored the Second Amendment” when it didn’t invalidate a single federal gun law.

Lee supports the REINS Act, which would “treat all new ‘major rules’—that is, those federal regulations that would impose a ‘significant economic impact’ of $100 million or more—essentially as legislative proposals that could take effect only if enacted into law by Congress.” One hundred million or more? What a joke. This means that unconstitutional federal regulations decreed by unconstitutional agencies that have an economic impact of “only” $99 million would still have a green light.

Although Lee voted against the USA PATRIOT Act, he touts his support for and cosponsorship of the USA FREEDOM Act that in some ways is worse than section 215 of the PATRIOT Act it was designed to replace. Since Lee’s book was written, the USA FREEDOM Act was passed by the House and Senate—with the help of Senator Mike Lee—and signed into law by the president.

On page 204 of his book, Lee makes a great statement on federalism: “The importance of emphasizing federalism cannot be overstated. We must continually remind our government officials and our fellow Americans that federal power is limited and that power not identified as federal by the Constitution is reserved to the states.” Too bad he doesn’t believe it.

Does Senator Lee consider all federal drug laws to be unconstitutional? If he does than this means he believes that the federal DEA should be abolished, all prisoners in federal prisons solely on federal drug charges should be pardoned and released, no federal laws should exist regarding the possession or use of cocaine or heroin, and the federal war on drugs should be ended. If he doesn’t then he is not someone “deeply committed to the limited-government principles embodied in the Constitution” that he says Americans should vote for.

In spite of the good things Lee says in the first part of his book, it is hard to take him seriously. He remarks in his book that “the Constitution has taken a beating over the years,” but then he supports actions that willfully subvert the very Constitution he claims to want to restore.

Along with Senator Rubio, Lee has put forth a tax reform plan that subsidizes the poor, soaks the rich, and funds federal government with trillions of dollars to continue its unconstitutional programs and spending. But the worst thing Lee has ever done is vote in favor of the unbalanced, gargantuan, debt-increasing, unconstitutional, welfare/warfare state-funding $3.871 trillion new Republican budget.