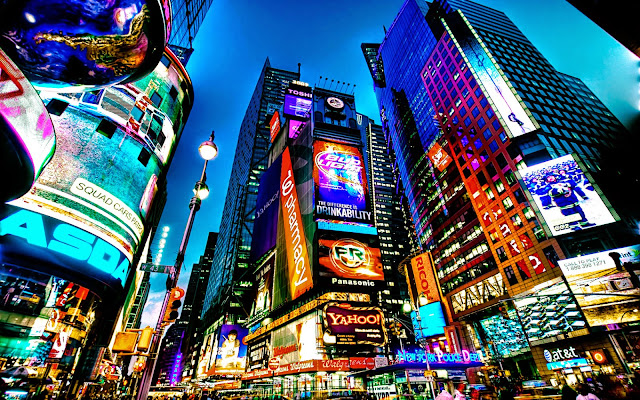 Supposedly, a 2012 law puts the Time Square area of glitz and excitement under the restrictions of the 1965 Highway “Beautification” Act — which limits signs to 1,200 square feet. Now Washington is pushing the city Department of Transportation to comply.

This anti-billboard craze, btw, started with Lady Bird Johnson. She was no match for her husband when it came to evil, but she was a nutcake national busybody.

George Reisman explained the dangerous doings of Lady Evil and how the anti-billboard craze launched the anti-human environmental movement,  during a 2001 Austrian Economics Newsletter interview:

REISMAN: [T]his political ideology we call environmentalism began in the mid-1960s. I remember that I was in San Francisco in 1967, reading a column by Eric Severeid. He predicted that environmentalism would be a leading political movement in the next decade. I recall thinking: that’s preposterous. It seemed so ridiculous, I couldn’t understand how anyone could take it seriously.

The whole movement seemed to grow out of Lady Bird Johnson’s objections to billboards on interstate highways. It began as a kind of silly political program to get rid of junkyards because they were unsightly. I recall that Al Capp had a solution to the problem of junkyards.

He wanted Andy Warhol to put his signature on them and call them works of art. That was aboutthe level of answer the whole thing deserved.

AEN: But in time, the movement would grow.

REISMAN: It is so large that it is impossible to get away from. A student told me that as a child he was exposed to all sorts of cartoons featuring children who fight dirty capitalists who own sludge factories.These kids are being indoctrinated not only by cartoons but in school and in the culture at large.

What’s at issue here is a philosophical problem. The movement is fundamentally antihuman. That iswhat motivates it. This is a more widely occurring phenomenon than you might suppose. We knowof serial killers, but every once in a while similar mentalities gain political power, as happened with the communists and the Nazis. There is a lot of hatred and hostility in many people that is just looking for something to attach itself to.

AEN: An attack on human life by another means.

REISMAN: That is essentially what environmentalism amounts to. It is the political movementwhere the destructive impulse has parked itself today. First you have the hatred, then you have a cultural vehicle, such as a totalitarian political movement or an insane religion, that allows and encourages the hatred to be expressed.

Intellectually, environmentalism is nothing more than the death rattle of socialism and should be mucheasier to overcome. Socialists used to masquerade as defenders of science and reason, and now they are openly anti-science and technology,as we see with environmentalism.

AEN: Also, they don’t promise to better our lot.

REISMAN: It’s true that the communists always claimed that if they had control, they would improve the material lot of mankind. The environmentalists don’t offer that; quite the opposite, they say that mankind is too well off. They claim they want collectivist control in order to avoid what they claim will be immense catastrophe.

Quite simply, there is no respect by the power freaks in Washington DC for private property, “tolerance” of those whose vision of the world in any way  differs from their own view (including their view on billboards!). They are anti-freedom monsters. If  they really hate billboards they should stay in Washington DC and spend their weekends picnicking near the Vietnam War Memorial.

Previous article by Robert Wenzel: The Three Most Important Technologies