The Greatest Movie Never Made

OK. Magnanimity in victory is a sine qua non among civilized men and women, so let me not be the first to rub it in. Last week I wrote that I feared the worst and felt sorry for Britain. I was convinced throughout the campaign that a certain testicular fortitude was missing on the part of the voters, and that David Cameron would be vacating 10 Downing Street. But not for the first time I was proved wrong. The only testicular fortitude missing was when Ed Balls lost his seat. So now we’ll have five more years of furious lefty hacks passing more wind than usual. There is nothing that angers Guardianistas more than when good, hard working people vote with their brains. Tilting against the windmills of envy and class warfare might sound like a loser, but last Thursday’s results showed the Brits to possess testicular fortitude, as well as nous. Take it from Taki, this could be the start of something big: Reforms for the undemocratic EU. No more European super state, no more dominance from Brussels, no more foreign judges ordering left-wing human rights ukases. It’s all up to David Cameron and I sure hope he succeeds. Mind you, only the heartless can fail to sympathize with Ed Miliband, but he can always advise Chanel 4 or write a column in the Guardian. 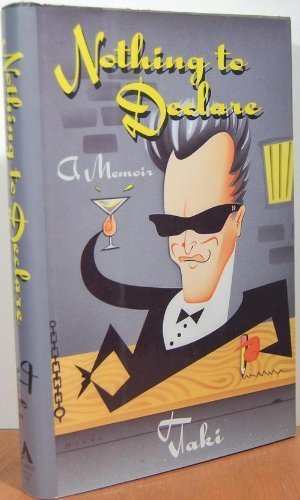 And things have been honky dory over in these shores, also. At lunch with Harvey Weinstein and Michael Mailer at Harvey’s Tribeca Grill, the purpose of it being a film version of the greatest book ever written except for the Bible, Nothing to Declare. I was flattered but quoted Deborah Ross: “Only Taki can play Taki.” This she wrote while reviewing the greatest movie ever made, Seduced & Abandoned. The trouble is that Taki no longer looks so good. And who could play young Taki now that Mickey Rooney’s dead. But Harvey Weinstein is a generous man besides being the only producer who makes films without non-stop car chases and zombies blowing up their innards. What about a documentary, he suggested. My best buddy Michael Mailer, a very successful filmmaker in his own right, is facing a Sisyphian task in trying to sell Taki. People go to the movies to watch violence and horror. My life is as easy to film as reading Finnegan’s Wake. Andy Warhol once made a movie of a man sleeping for thirty hours straight. Some modernists even liked it. Filming Taki reading, training, and pursuing the fairer sex unsuccessfully would be almost as thrilling as Warhol’s Sleep. Let’s call “Nothing to Declare” the greatest movie never made, and leave it at that.

Got 2 Minutes?Need a Quick Fix?