It began with high hopes – and an audacious plan. Unfortunately, it belly-flopped badly… .

By the mid-1980s, Cadillac was still the “standard of the world” – if by “the world” one meant nursing homes and the parking lots of Florida retirement communities. GM’s premier division – once purveyor of coach-built V-16 masterpieces in the 1920s and ’30s – had become purveyor of the automotive equivalent of the Early Bird Special: Rebadged (and re-priced) versions of Chevys, trimmed with vinyl roofs and fitted with fake wire wheel covers. You could almost smell the Noxzema.

Not much future in that – because your demographic hasn’t got much of a future.

And so – like a has-been athlete determined to whip himself back into fighting trim  – GM execs conceived the Allante. It would be a winning combination of European elanand American muscle; a no-compromises tour-de-force of elegance, speed and technology. The goal was nothing less  than putting together the finest ultra-luxury coupe GM had ever produced – and perhaps, that the world had ever seen.

Styling was turned over to Pininfarina – the world-famous Italian design studio where so many automotive legends first took form. The relationship was not entirely new, as Pininfarina had been involved previously with Cadillac on the cosmetics of both the 1931 V-16 Phaeton and the ’59 Eldorado Brougham.

This third collaboration would also turn out brilliantly – at least insofar as the initial curb appeal of the finished car was concerned.

The Allante was universally acclaimed as a gorgeous piece of work when it made its debut in 1986 as a 1987 model. The two-seat roadster – Cadillac’s first such car since 1941-  was dramatic, sleek and expensive-looking. It came with two tops (removeable hardtop or convertible soft-top) 10-way power Recaro sport buckets wrapped in hand-trimmed leather and a dashboard with partial electronic/digital  display – impressive equipment for 1987. 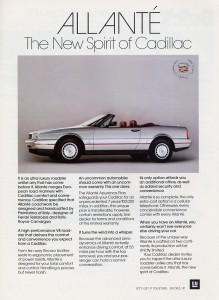 And for an American car, especially.

The standard engine was Cadillac’s HT4100 V-8, which was actually (and for the first time in along time) a not-Chevy V-8. It was aluminum and featured sequential electronic port fuel injection (an upgrade over the throttle-body style then in common usage), roller cam/lifters and high-flow cylinder heads – good for 170 hp, a not-bad number for the era.

The engine drove the front wheels through a specially calibrated four-speed Turbo-hydramatic automatic transmission with overdrive.

Performance was good: 0-60 in 9.5 seconds with a top speed of 120-plus mph (although the Allante’s targeted rival, the Mercedes-Benz 560SL, was quicker and faster). With four-wheel-disc brakes (10.25-inch vented up front; solid 10-inch discs in the rear) and VR-speed rated Goodyear Eagle tires, stopping power and handling dynamics were much-improved over the wallowing whitewall-tired geezermobiles Cadillac had been selling up to that point.

A seven-year warranty was standard, too – unprecedented for GM – and each car was given an extensive pre-delivery inspection that included a 25 mile test drive by a team of dedicated technicians, who signed off on the car before it reached the customer.

Pininfarina not only penned the car’s exterior, it built (and finished) the actual bodies, too – at least, partially so. While the exterior panels (including the lightweight aluminum hood, trunk lid and removable hard-top) were unique pieces not shared with any other GM vehicle, the Allante’s underlying platform was derived from the same-year Eldorado – in modified, shortened-wheelbase form. This meant it was necessary to ship partially assembled Eldorado under-bodies to the Pininfarina factory near Turin, Italy – where the Allante-specific exterior panels were fitted. Once this work was complete, the fully assembled and painted shells (56 at a time) were transported overseas in specially built cradles; these were were loaded onto Boeing 747 “air bridges”  for the return trip to the U.S. and GM’s Hamtramck assembly line in Michigan. Here, the running gear – engine and transmission, suspension, brakes, etc. – were bolted to the chassis, completing the cars.

It was, as Cadillac PR described it, the “world’s longest assembly line.”

It was also hugely, horribly complex – which almost foreordained quality control problems – as well as horribly inefficient, which helped boost the Allante’s end-cost to the point that GM reportedly lost money on each “sale.”

Worse, minor (and a few major) problems plagued the cars from the very beginning – including issues with the digital dash and convertible top ranging from malfunctioning latching mechanisms to water leaks to fabric wear resulting from the material rubbing up against the body while stowed.

People paying six figures for a car tend not to tolerate such things.

Previous article by Eric Peters: Get Ready for Your Electronic Ear-Tag