If you need evidence that we are in the midst of a lunatic financial mania, just consider this summary from a Marketwatch commentator as to why markets are ripping higher this morning:

“The dovish comments from both Fed Chairwoman Janet Yellen and People’s Bank of China Governor Zhou Xiaochuan are giving markets a big lift, and in the absence of negative data or news, I imagine this will continue to buoy the markets throughout the session,” Erlam said in emailed comments.

Yellen said gradual hikes are likely this year, but that the central bank will move cautiously……. the PBOC governor said he saw “more room” for China to ease policy if the economy stays soft and inflation continues to weaken.

Its just that frightfully simple. If any of the major central banks anywhere on the planet ease or even hint they might, the robo machines and day traders unleash an avalanche of buy orders and the stock averages jerk higher.

Indeed, Zero Hedge captured the motion succinctly this AM. In keeping with Bernanke’s inaugural blog revelation that 98% of monetary policy consists of “open mouth” operations, the markets leapt upwards on cue. That is, if central banker jaws are flapping, then buy!

What this means is that this third immense financial bubble of the current century will keep inflating until central bankers stop banging the “stimulus” lever or the bubble finally crashes under its own weight. The latter will surely happen, eventually—- and the potential carnage can be readily approximated.

Last time, global equity market inflated to a peak of $60 trillion in aggregate value before they plunged to barely $25 trillion during the post-Lehman meltdown. Now they have been pumped back to the $80 trillion mark by the sheer recklessness of the world’s central bankers, but this time the underlying economic advance has been even more artificial and unsustainable; it amounts to little more than a temporary outgrowth of the explosion in public and private credit since late 2008. At the same time, the bubble has been spread to virtually the entirety of the world’s $200 trillion credit market owing to the nearly universal embrace of massive central bank bond-buying under QE.

Yet do the central bankers have even the foggiest clue that they are sitting on a potential $50-$100 trillion financial market implosion? That the mother of all meltdowns lurks around the corner?

Not these boneheads. They have ripped all the stabilization circuitry out of financial markets, thereby completely disabling honest price discovery. That means they have destroyed the shorts, extinguished fear, obsoleted fundamental analysis, drastically cheapened the cost of hedging and offered speculators unlimited opportunities to shoot fish in a barrel by front-running their announced bond buying and currency manipulation campaigns. In short, they have showered speculators with stupendous windfalls, displacing self-correcting two-way financial markets with rigged gambling casinos in the process.

The immense damage visited upon the machinery of financial markets is sitting there in plain sight. The endless six-year buy-the-dips run of the S&P 500 since March 2009, for example, would be impossible in an honest free market. So why do they ignore the dangers, and stubbornly plow forward clutching to ZIRP, N-ZIRP, QE, forward guidance and all the other tools of central bank stimulus?

The utterances of the duo who kicked off today’s rip make absolutely clear why the central bankers will never stop stimulating. They have embraced a spurious “inflation deficiency” doctrine, and have thereby, in effect, lashed themselves to the wheel of a doomsday machine.

To wit, massive central bank financial repression is the actual cause of deflation. In the boom phase of the expansion it leads to unsustainable public and private borrowing which finances artificial spending by households and governments and excess investment in private mining, processing, manufacturing, transportation and distribution capacity as well as public infrastructure. Then eventually comes the crack-up phase when the borrowing ends or diminishes, causing reductions in output, prices, profits and incomes throughout the economic chain.

Thus, Governor Zhou Xiaochuan’s threat to unleash more stimulus owing to the specter of “deflation” in China borders on the comical. The very deflation about which he frets was caused by the runaway money printing campaigns of the PBOC over the last several decades—-campaigns which produced monumental price and credit inflation in China, and which were then transmitted and amplified throughout the world economy, and especially China’s supply base in the EM

In the process, the latter caused massive overinvestment and malinvestment in private industry and public infrastructure alike. The “deflation” that Zhou professes to fear is thus the result of price cutting by companies battered by too much debt and too little business, and the inexorable cooling of artificial demand for the materials and services needed to build empty apartments, malls and cities and hideously redundant highways, airports, subways and bridges.

Indeed, the PBOC is threatening to chase its own tail. If China’s traditional high level of consumer inflation is abating, its because of the drastic cooling of the oil-energy complex and the iron ore-metals complex—–trends which, in turn, originate in the sharp and unavoidable slowing of China’s construction and investment mania. 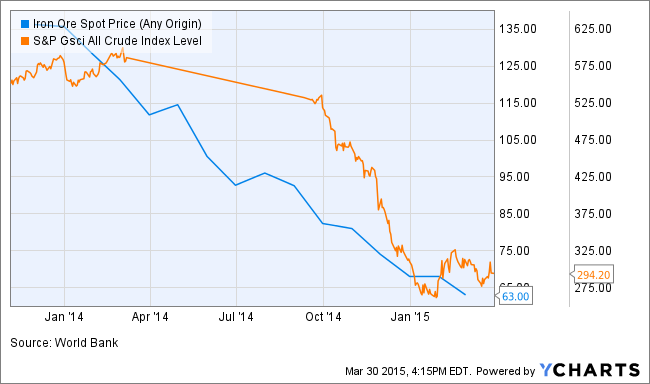 So there you have it. The People’s Printing Press of China has been running red hot for more than two decades, and has fueled the most fantastic credit bubble in human history. Total credit market debt outstanding in China at the turn of the century was $2 trillion; now its 14X higher at $28 trillion. Even more fantastically, China’s nominal GDP has barely doubled—-from $5 trillion to $10 trillion since the 2007, but its credit market debt—-public and private combined—-has increased by $21 trillion, or by 4X the gain in money GDP.

This is downright monetary insanity, but in response to modest cooling of its construction frenzy, its chief central banker could think of only one thing: mooar ease!  Apparently, a 7X increase in PBOC’s balance sheet since the turn of the century is not enough—–even when it only adds fuel to the deflationary fires.

Needless to say, during the past year the signs that the China house of cards is tottering have become omnipresent. So this is where the doomsday machine comes front and center. China’s credit addicted financial system has just channeled the centrals banks liquidity to the stock market in response to Beijing’s attempts to administratively rein-in the shadow banking system excesses, and particularly, so-called “trust loans” to developers and commodity speculators.

Accordingly, the Shanghai A Shares index is up 81 % in the last nine months fueled by margin loans and an explosion of retail stock market speculation. 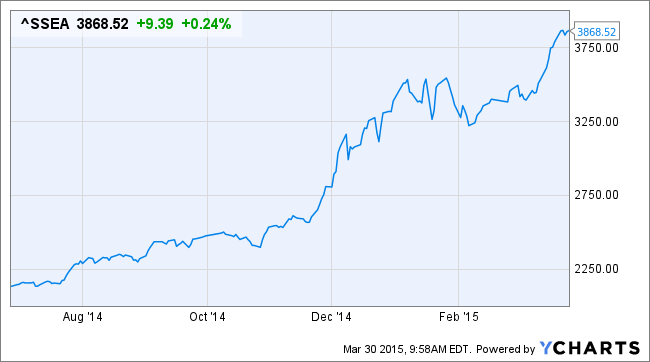 Janet Yellen’s pronouncements last Friday were no more sensible. Rhetorically waving her arms at the bogeyman of too little inflation, she proclaimed the following:

That said, we must be reasonably confident at the time of the first rate increase that inflation will move up over time to our 2 percent objective, and that such an action will not impede continued solid growth in employment and output.

There you have it. There is not an iota of evidence that 2% inflation will cause any more growth in output and employment than will 1.6% inflation—–the actual rate of CPI change over the past year. Worse still, the is absolutely no chance that “open mouth” policy at the Eccles Building will have any impact on what amounts to downright trivial short-term wiggles in the measured CPI.

Indeed, the very idea that the US economy is suffering from insufficient inflation is a Keynesian canard that defies empirical reality and common sense. As we demonstrated last week, the rate of real GDP growth has slowed to 1.1% since the turn of the century or to less than one-third of its historic growth rate. And that’s despite a 9X increase in the Fed’s balance sheet—-from $500 billion to $4.5 trillion during the last 15 years—-and more inflation than main street households could tolerate, given the tepid rate of wage growth during that period.

And it doesn’t matter how you measure it. Inflation has been high on a cumulative basis, and the median household income has been going in the wrong direction. In short, the US economy has not suffered from an “inflation deficiency”. As shown above, the price level has actually doubled  since the Greenspan era of monetary central planning incepted in 1987.

Likewise, there is no shortage of “aggregate demand” that can be remedied by continued “monetary accommodation”. The welcome. modest abatement of consumer price inflation in recent months reflects the epochal deflation now underway around the planet——the inexorable correct of the monetary boom that has been fueled by central banks since the 1990s.

By insisting that monetary accommodation can fill-up an imaginary bathtub called the US economy until it reaches the brim of full employment and precisely 2.000% change in the PCE deflator over some arbitrary time frame that remains forever undefined, the Fed is engaging in an act of monumental folly, and one which is being replicated by the rest of the world’s convoy of money printing central banks.

That’s the equivalent of a doomsday machine. They will ease and talk of easing until the third great bubble of this century reaches brobdingnagian extremes. Then the carnage will commence. Again.

Previous article by David Stockman: Yellen Is in a Bubble Bind