As the debate over marijuana legalization continues in the United States, a new study suggests that smoking the controversial plant is about 114 times safer than drinking alcohol.

In fact, alcohol was found to be the deadliest drug on an individual level, at least when it comes to the likelihood of a person dying due to consuming a lethal dose. Heroin and cocaine were the next most deadly substances, followed by tobacco, ecstasy, and meth. Trailing up the rear was marijuana.

According to the team of international researchers behind the study, published in the journal ‘Scientific Reports,’ the findings suggest that marijuana risks – at least those related to mortality – are trumped when compared to substances like alcohol.

“The results confirm that the risk of cannabis may have been overestimated in the past,” the report reads. “At least for the endpoint of mortality, the [margin of exposure] for THC/cannabis in both individual and population-based assessments would be above safety thresholds (e.g. 100 for data based on animal experiments). In contrast, the risk of alcohol may have been commonly underestimated.” 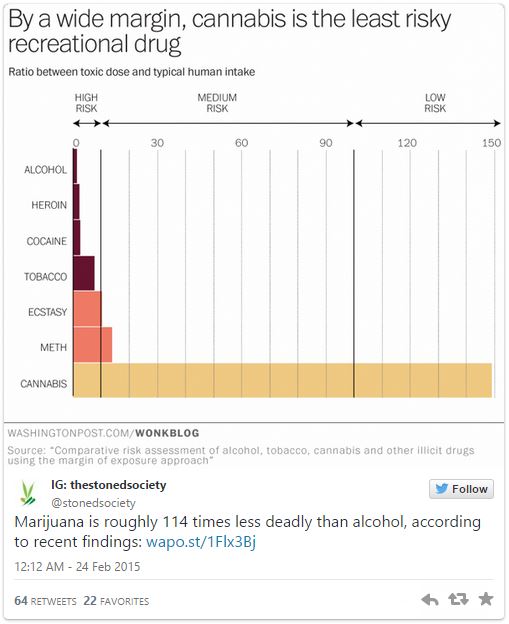 As reported by the Washington Post, the study’s results aren’t exactly new, though they do confirm similar findings first reported a decade ago. In a separate story last year, the Post noted that Wayne Hall of the World Health Organization said it’s nearly impossible for even those who smoke large amounts of cannabis to overdose on the drug.

“The estimated fatal dose [of THC, the primary active compound in marijuana] in humans derived from animal studies is between 15 and 70 grams. This is a far greater amount of cannabis that even a very heavy cannabis user could use in a day,” Hall wrote last year.

Even alcohol’s unsafe margin of exposure (MOE) ratio isn’t all that surprising since, unlike heroin and cocaine, it is legal and much more readily available and accepted.

Marijuana legalization advocates are welcoming the new study, using it to suggest that America’s current ban on the drug is wrong and misguided, considering the mortality rates associated with alcohol and tobacco – both of which are legal and easily accessible to those of age. Marijuana, meanwhile, is still illegal on the federal level and largely illegal on the state level – except in Colorado, Oregon, Alaska, and the District of Columbia.

Even the researchers noted that compared to other drugs, their findings support regulating pot as a legal substance instead of a banned one.

“Currently, the MOE results point to risk management prioritization towards alcohol and tobacco rather than illicit drugs,” the report reads. “The high MOE values of cannabis, which are in a low-risk range, suggest a strict legal regulatory approach rather than the current prohibition approach.”

Despite the new study, the American Academy of Pediatrics cautions that pot should not be smoked by children or teenagers, as there have been studies suggesting a link between youth smoking and impaired child development.

Previous article by Russia Today: Another Reason To Stay Out of Hospitals

EU DisasterIf the State Cages You