Is Russia Planning a Gold-Based Currency?

The “perfect-storm” of geopolitical instability, diplomatic isolation, severe currency depreciation, and economic decline now confronting Russia has profoundly damaged Moscow’s international standing, and possibly for the long-term. Yet, it is precisely such conditions that may push the country’s leadership into taking the radical step that will secure its world-player status once and for all: the adoption of a gold-exchange standard.

Though a far-fetched idea at first glance, many factors suggest that remonetization in gold may be a logical next step for Moscow.

First, for years Moscow has been expressing its unwillingness to remain at the monetary mercy of the US and its NATO allies and this view has been most vehemently expressed by President Putin’s long-time economic advisor, Sergei Glazyev. Russia is prepared to play strategic hardball with the West on the issue: the governor of Russia’s central bank took the unusual step last November of presenting to the international media details of the bank’s zealous gold-buying spree. The announcement, in sharp contrast to that institution’s more taciturn traditions, underscores Moscow’s outspoken dismay with dollar hegemony; its timing suggests coordination with the top rungs of government to present gold as a possible currency-war weapon. 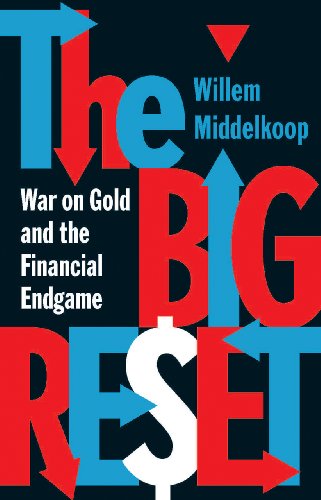 Second, despite international pressure, Russia has been very wary of the sell-off policies that led the UK, France, Spain, and Italy to unload gold over the past decade during unsuccessful attempts to prop up their respective ailing economies — in particular, of then-Prime Minister Gordon Brown’s sell-off of 400 metric tons of the country’s reserves at stunningly low prices. Moscow’s surprise decision upon the onset of the ruble’s swift decline in early December 2014 to not tap into the country’s gold reserves, now the world’s sixth largest, highlights the ambitiousness of Russia’s stance on the gold issue. By the end of December, Russia added another 20.73 tons, according to the IMF in late January, capping a nine-month buying spree.

Third, while the Russian economy is structurally weak, enough of the country’s monetary fundamentals are sound, such that the timing of a move to gold, geopolitically and domestically, may be ideal. Russia is not a debtor nation. At this writing in January, Russia’s debt to GDP ratio is low and most of its external debt is private. Physical gold accounts for 10 percent of Russia’s foreign currency reserves. The budget deficit, as of a November 2014 projection, is likely to be around $10 billion, much less than 1 percent of GDP. The poverty rate fell from 35 percent in 2001 to 10 percent in 2010, while the middle class was projected in 2013 to reach 86 percent of the population by 2020.

Collapsing oil prices serve only to intensify the monetary attractiveness of gold. Given that oil exports, along with the rest of the energy sector, account for 45 percent of GDP, the depreciation of the ruble will continue; newly unstable fiscal conditions have devastated banks, and higher inflation looms, expected to reach 10 percent by the end of 2015. As Russia remains (for the foreseeable future) mainly a resource-based economy, only a move to gold, arguably, can make the currency stronger, even if it does limit Russia’s available currency.

In buying as much gold as it has, the country is, in part, ensuring that it will have enough money in circulation in the event of such fundamental transformation. In terms of re-establishing post-oil shock international prestige, a move to gold will allow the country to be seen as a more reliable and trustworthy trading partner.

The repercussions of Russia on a gold-exchange standard would be immense. Above all, it would mean the first major schism in the world’s monetary order. China would quite likely follow suit. It could mean the threat of a severe inflation in the United States should rafts of unwanted dollars make their way back across the Atlantic — the Fed’s ultimate nightmare. Above all, the country will avoid the extreme debt leverages which would not have happened had Western capitals remained on gold.

“A gold standard would be politically appealing, transforming the ruble to a formidable currency and reducing outflows significantly,” writes Dr. Enrico Colombatto, economics professor at the University of Turin, Italy.

He notes that the only major drawback would be that the imposed discipline of a gold standard would deprive authorities of discretionary political power. The other threat would be that of a new generation of Russian central bankers becoming too heavily influenced by the monetary mindset of the European Central Bank (ECB) and the Fed.

As Alisdair MacLeod, a two-decade veteran of off-shore banking consulting based in the UK, recently wrote, Russia (and China) will “hold all the aces” by moving away from any possible currency wars of the future into the physical gold market. In his article, he adds that there is currently a low appetite for physical gold in Western capital markets and longer-term foreign holders of rubles would be unlikely to exchange them for gold, preferring to sell them for other fiat currencies.

Mr. Macleod cites John Butler, CIO at Atom Capital in London, who sees great potential in a gold-exchange standard for Russia. With the establishment of a sound gold-exchange rate, he argues, the Central Bank of Russia would no longer be confined to buying and selling gold to maintain the rate of exchange. The bank could freely manage the liquidity of the ruble and be able to issue coupon-bearing bonds to the Russian public, allowing it a yield linked to gold rates. As the ruble stabilizes, the rate of the cost of living would drop; savings would grow, spurred on by long term stability and lower taxes.

Foreign exchange also would be favorable, Mr. Butler maintains. Owing to the Ukraine crises and commodities crises, rubles have been dumped for dollar/euro currencies. Upon the announcement of a gold-exchange, demand for the ruble would increase. London and New York markets would in turn be countered by provisions restricting gold-to-ruble exchanges of imports and exports.

The geopolitics of gold also figure into Russia’s increasingly close relations with China, a country that also has made clear its preference for gold over the dollar. (Russia recently edged out China as the world’s top buyer of the metal.) In the aftermath of the $400 billion, 30-year deal signed between Russian gas giant Gazprom and the China National Petroleum Company in November 2014, China turned its focus to the internationalization of its own gold market. On January 15, 2015, the Shanghai Gold Exchange, the largest physical gold exchange worldwide, and the World Gold Council, concluded a strategic cooperation deal to expand the Chinese gold market through the new Shanghai Free Trade Zone.

This is not the first time the gold standard has been seen as the ultimate cure for Russia’s economic problems. In September 1998, the noted economist Jude Wanninski predicted in a far-sighted essay for The Wall Street Journal that only a gold ruble would get the the country out of its then-debt crises. It was upon taking office about two years later, in May 2000, that President Putin embarked upon the country’s massive gold-buying campaign. At the time, it took twenty-eight barrels of crude just to buy an ounce of gold. The gold-backed ruble policy of those years was adopted to successfully pay down the country’s external debt.

As a pro-gold stance is, essentially, anti-dollar, speculation about how the US would react raises the question of whether an all-out currency war would follow. The West would have to keep Russia regionally and militarily marginalized, not to mention kept within the confines of the Fed, the ECB, and the Bank of England (BOE).

Nor is that prospect too far-fetched. As Dutch author Willem Middelkoop has written in his 2014 book The Big Reset: War on Gold and the Financial Endgame,

A system reset is imminent. Even before 2020 the world’s financial system will need to find a different anchor. … In a desperate attempt to maintain this dollar system, the United States waged a secret war on gold since the 1960s. China and Russia have pierced through the American smokescreen around gold and the dollar and are no longer willing to continue lending to the United States. Both countries have been accumulating enormous amounts of gold, positioning themselves for the next phase of the global financial system.

The Best of Marcia Christoff-Kurapovna

Marcia Christoff-Kurapovna contributed feature pieces and op-eds on Swiss and Liechtenstein banking issues for The Wall Street Journal Europe while based in Vienna, Austria; she also authored a column, ‘Swiss Watch.’ She currently lives in Washington, DC where she is a speech and op-ed writer to foreign dignitaries.