Loren Lomasky’s frenetic and almost hysterical review of Hans-Hermann Hoppe‘s A Theory of Capitalism and Socialism (“The Argument from Mere Argument,” September 1989) is an amusing if unwitting vindication of Hoppe’s method of exposing “performative contradictions” among his opponents. Lomasky’s actual arguments against Hoppe are meager, but the bulk of Lomasky’s review consists, not in argumentation, but in making two angry charges: (1) that Hoppe is impolite with philosophers or economists he disagrees with; and (2) that Hoppe is unscholarly. 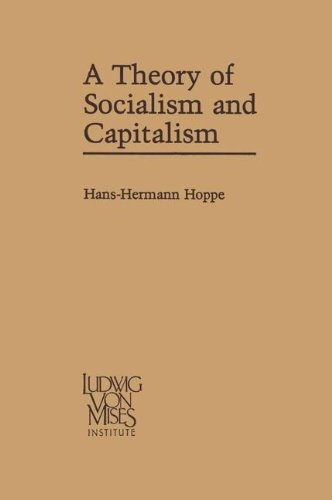 But in making both of these charges, Lomasky is a living contradiction. The reader of his review would never know it, but Hoppe’s critiques of his opponents constitute a mere two or three footnotes in a several-hundred page book. The great bulk of the book sets out Hoppe’s positive deductive theory of economics and political ethics. This accounts for Hoppe’s not spending more time rebutting Nozick, Locke’s proviso, etc., which calls down upon him Lomasky’s wrath. It is actually Lomasky who is ranting and rude in his attack on Hoppe. Performative Contradiction Number One.

Lomasky’s second charge against Hoppe is lack of scholarship, for which not spending time on Nozick is a typical – and irrelevant – charge. But what of Lomasky’s own scholarship, as evidenced by his review? First, he is shocked and stunned that Hoppe is not simply a defender of existing capitalism; his book is “no less than a manifesto for untrammeled anarchism.” Well, heavens to Betsy! Anarchism! One wonders where Lomasky has been for the last 20 years! Perhaps the knowledge has not yet penetrated to the fastnesses of Minnesota, but anarchism has been a vibrant part of the libertarian dialogue for a long time, as most readers of Liberty well know.

Lomasky then engages in a little trick. He quite correctly defines “socialism” as central planning and state ownership of the means of production, but then derides Hoppe as “idiosyncratic” for calling any government interference with free exchange “socialistic.” The two, however, are not contradictory. Total government is socialism; partial government is socialistic. If Lomasky should ever read any comments on the dramatic events in Eastern Europe, for example, he will find them referred to, quite properly, as movements away from socialism and toward free markets.

Lomasky also writes as if the idea of an a priori of argumentation is a weird new bizarrerie propounded by Hoppe. He seems never to have heard of the Habermas-Apel doctrine, of which Hoppe’s is a libertarian extension. Comparing Hoppe’s deductive arguments to Zeno’s or Anselm’s also misses the point, since these classic arguments are difficult-to-refute demonstrations of conclusions most of us consider absurd, whereas Hoppe’s is a difficult-to-refute argument for a conclusion libertarians are supposed to welcome: a copper-riveted argument for the absolute rights of private property.

Absurdly, Lomasky attacks Hoppe’s arguments against public goods (completely missing Hoppe’s subtle and lengthy discussion) as stating that voluntary actions and exchanges are optimal, while coercive transactions injure people and are therefore worse than optimal. Again, Lomasky acts as if Hoppe has just come up with a bizarre thesis of his own, not seeming to have heard of many decades of libertarian and free-market thought that has concluded similarly. It seems, in short, that Lomasky has never heard of libertarian arguments or doctrines. Talk about lack of scholarship! Performative Contradiction Number Two.

The Lomasky review is an interesting example of what is getting to be a fairly common phenomenon: Hoppephobia. Although he is an amiable man personally, Hoppe’s written work seems to have the remarkable capacity to send some readers up the wall, blood pressure soaring, muttering and chewing the carpet. It is not impolite attacks on critics that does it. Perhaps the answer is Hoppe’s logical and deductive mode of thought and writing, demonstrating the truth of his propositions and showing that those who differ are often trapped in self-contradiction and self-refutation.

In the good old days, this was a common style in philosophy, employed by Kantians, Thomists, Misesians, and Randians alike. In the modern age, however, this method of thought and writing has gone severely out of fashion in philosophy, where truth is almost never arrived at – and certainly never argued for in a deductive fashion. The modern mode is utilitarian, positivist, tangential, puzzle-oriented, and pseudo-empiricist. As a result, modern positivist types have gone flabby and complacent, and reading hard-core deductivists – to say nothing of hard-core libertarians! – hits these people with the force of a blow to the gut.

Well, shape up, guys! In argument as in politics, those who can’t stand deductivist heat should get out of the philosophic or economic kitchen.