He identified the neocon agitation to replace the old perpetual war with a new one as soon as it started.

In 1990, Murray Rothbard clearly identified the earliest signs of the ultimately successful decade-long push by the neocons to replace their dearly missed Cold War with a global, imperialist, and permanent War on Islamic fundamentalism and for “Democracy.” He wrote in his April 1990 column “The Post-Cold War World: Whither U.S. Foreign Policy” (which can be found in the collection The Irrepressible Rothbard):

“But if the Cold War died in the Communist collapse of 1989, what can the ruling conservative-liberal Establishment come up with to justify the policy of massive intervention by the U.S. everywhere on the globe? In short, what cloak can the Establishment now find to mask and vindicate the continuance of U.S. imperialism? With their perks and their power at stake, the Court apologists for imperialism have been quick to offer excuses and alternatives, even if they don’t always hang together. Perhaps the feeling is that one of them may stick.

The argument for imperialism has always been two-edged, what the great Old Rightist Garet Garrett called (in his classic The People’s 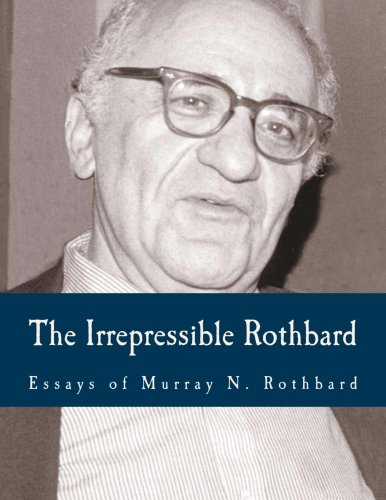 A third threat has been raised in the Wall Street Journal by that old fox, the godfather of the neocons, Irving Kristol. Kristol, in a rambling account of the post-Cold War world, leaps on the “Islamic fundamentalist” threat, and even suggests that the U.S. and the Soviet Union should discreetly cooperate in putting down this looming world period. Here we see a hint of a new conservative-liberal concept: a benign rule of the world by the United States, joined by the Soviet Union as a sort of condominium-junior partner, along with Western Europe and Japan. In short, an expanded Trilateral concept. Of course, pinpointing Islamic fundamentalism comes as no surprise from the neocons, to whom defense of the State of Israel is always the overriding goal.

But in addition to the negative there is the positive. The vaunting along with the fear. The positive carrot is the old Wilsonian dream of the U.S. as global imposer of “democracy.” Since very few countries can pass the “democracy” test, or have ever done so, this poses an objective that suits the Establishment interventionists fine: for here is a goal that can never possibly be achieved.

A goal that can never be reached but can always be kept shimmering on the distant horizon is perfectly tooled for an endless policy of massive expenditure of money, arms, blood, and manpower in one foreign adventure after another: what the great Charles A. Beard brilliantly termed “perpetual war for perpetual peace.”

After 9/11, the neocons finally achieved their new perpetual war to replace the old one.

Also published at DanSanchez.me and Medium.com.

Want To Hurt the Tragic Continent?15 Minutes into the Movie ‘Fury’