Top 100 SAT Scores Ranking: Which Colleges Have The Brightest Kids? 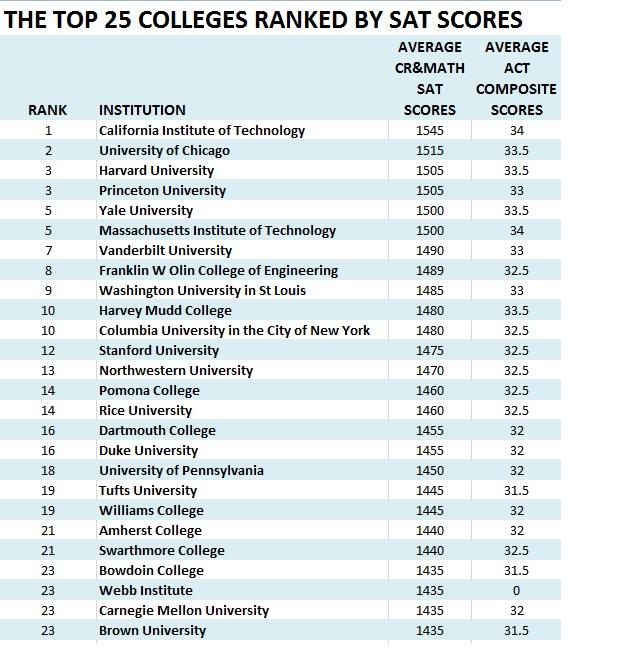 As someone who has spent more than a few hours both visiting colleges as a potential customer and, as a reporter, covering the economics of higher education (see my latest story), you sometimes get the sense from admissions officers and even some parents that hanging too much on  SAT scores is not only a mistake, but politically incorrect.

After all, it has been proven that kids from wealthy families, who can afford SAT prep courses and often go to more competitive high schools, tend to get higher scores. The test is biased towards the affluent and it is often argued that a student’s high school record and GPA are more predictive of academic success. Indeed, a growing number of colleges are adopting SAT/ACT optional policies.

Despite all of this negative noise, standardized tests like the SAT still matter a lot to highly selective colleges. Two biggest reasons:  1) It is an effective way to screen out students when the number of  applications is overwhelming (Stanford reported 42,000 applications for roughly 1,700 freshman in the Class of 2018), and 2) Colleges admissions offices care a great deal about popular rankings like U.S. News & World Report’s and tests like the SAT have a fairly significant weighting in the formula. For executives running admissions offices at top colleges, moving up on U.S. News list is almost always recognized by the Board of Trustees, and this can mean good things during  bonus time. (Forbes own college ranking (see here) doesn’t consider SATs)

Can the World Kick the Dollar to the Curb?You’re Probably Not Getting Enough