The Most Tragic War in Modern History

The 100th anniversary of the beginning of World War I is upon us. Well we should mourn this cataclysmic event and continue to draw lessons from it.

As a former soldier and military historian, I’ve always felt that WWI was the most tragic conflict in modern history:  a totally avoidable madness that wrecked Europe’s glittering civilization and led directly to World War II, Hitler and Stalin.

This mournful anniversary has reopened fierce debate over who was responsible for the Great War.

On one side of the debate is historian Margaret MacMillan, whose new book “The War That Ended Peace,” lays primary blame on Germany’s military and commercial ambitions. MacMillan is a nice lady – I’ve debated her on TV – but her tedious new book is so steeped in traditional  British/Anglo-Saxon bias against Germany as to be of limited  value.

On the other is “The Sleepwalkers – How Europe Went to War in 1914” by Cambridge professor Christopher Clark. This brilliant book is the finest, most instructive, best balanced book ever written on the origins of the Great War.

I say this as holder of a degree in the diplomatic history of World War I, and as one who has walked most of the battlefields of the Western Front.

Prof. Clark deftly and elegantly weaves a tapestry of events that conclusively shows that Germany’s role in the conflict was no greater than the other belligerents, and perhaps less than commonly believed.  Starved into submission by Britain’s naval blockade, Germany was unfairly and foolishly saddled with total war guilt, and saw 10% of its territory and 7 million of its people torn away at Versailles by 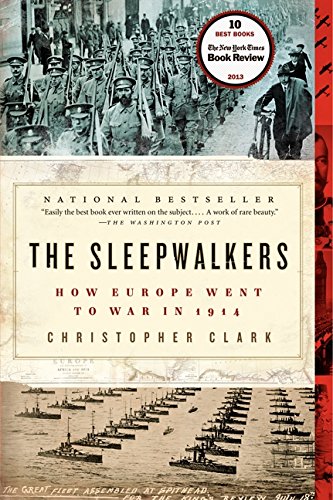 Adolf Hitler rose to power on his vow to return Germany’s lost lands and peoples who had been given to Poland, Czechoslovakia and Yugoslavia.  Stalin was determined to regain Russian territory lost at the 1918 Treaty of Brest-Litovsk.

Most of today’s Mideast’s problems flowed directly from the diplomatic lynching of Germany at Versailles led by France and Britain. Both of these imperial powers feared Germany’s  growing commercial and military power (just as the US today fears China’s rise).   Germany’s vibrant social democracy with its worker’s rights and concern for the poor  posed a threat to the capitalists of Britain and France.  Britain’s imperialists were deeply worried by the creation of a feeble little German Empire based in Africa.   At the time they controlled a quarter of the globe and all of its oceans.

Clark’s book  shows precisely how Serbia’s militarist-nationalist-religious cabal, known as the Black Hand, carefully planned and provoked the war by assassinating Austria-Hungary’s heir to the throne, Archduke Franz Ferdinand and his wife at Sarajevo, Bosnia, on 28 June, 1914.

The Serb ultra-nationalists objective was to annex Bosnia, Macedonia, Albanian Kosovo, and northern Albania to create a Greater Serbia. The Serb’s sought to provoke war between Russia and the decrepit Austro-Hungarian Empire in order to drive Vienna’s influence from the Balkans and allow the creation of Greater Serbia. The first two Balkan Wars, 1912 and 1913, expanded Serbia but failed to give it control of the entire Balkans and the strategic Albanian ports of Durres and Vlore on the Adriatic. Serbia remained landlocked.

In the late 1980’s, the Serb extremists, led by Slobodan Milosevic, who attempted ethnic cleansing of the Muslims of  Bosnia and Kosovo, were carbon copies of the Black Hand with the very same racist-nationalist geopolitical goals.

Germany, deeply fearing a two-front war made possible by the 1894 Franco-Russian Entente, had to mobilize before Russia’s armies could overrun East Prussia.  France, Russia’s ally, mobilized, burning for revenge for its humiliating defeat in the 1870 Franco-Prussian War and loss of Alsace and Lorraine.

A total conflagration could still have been averted if Great Britain, which had been playing neutral, had boldly demanded the rush to war cease. France would have been unlikely to go to war without Britain’s supporting its left flank in Flanders.

But Prof. Clark deftly portrays how a coterie of anti-German officials in Britain, led by the duplicitous  foreign secretary Sir Edward Grey and the ambitious, war-yearning imperialist, Winston Churchill, pushed the British Empire to war against Germany. They were joined by a cabal of German-haters in the French government.  British and French industrialists, fearful of German competition, and seeing huge profits to be made, backed the war party.

The British and French anti-German cliques played the same role as the pro-war American neoconservatives in the Bush administration, planting phony stories in the press and promoting pro-war allies into positions of power.

Clark also shows how almost 40 years of petty European rivalries, intrigues and power games – all contained while separate – finally ran disastrously together in 1914.

We see the same dangers today in the petty but growing conflict over Ukraine between the US and its European satraps and Russia.  Every week seems to bring the US and Russia closer to a collision as the Washington seeks to dominate Ukraine and use it as a weapon against Russia. Once again, neocons in Washington, allied to Ukraine’s hard right and neocons, are promoting the growing Russo-American conflict.

A conflict over a quasi-nation of absolutely no strategic interest to the United States. American neocons and their Congressional mouthpieces are now calling for NATO to take control of Moldova and Georgia. Conrad von Hotzendorf would have approved.

Previous article by Eric S. Margolis: Is the Tail Wagging the Dog?