The Catholic Case For Libertarianism: The Golden Rule

On June 3, 2014, Catholic University in Washington, D.C., hosted a conference entitled: “Erroneous Autonomy: The Catholic Case Against Libertarianism.” The initial buzz centered around the keynote speech by Cardinal Archbishop Rodríguez Maradiaga of Honduras.Catholic libertarians Tom Woods and Ryan McMaken have penned solid responses to the Cardinal’s speech, here and here.

The videos of the conference are now available. After watching the conference, I noticed a pronounced lopsidedness in the content, not because all the speakers were hostile to liberty, but because the speakers came mostly from a Catholic left perspective and seem chiefly interested in trashing free markets and the libertarians who advocate them. One has to wonder if the title ought not to have been: “The Case Against the Acton Institute.” 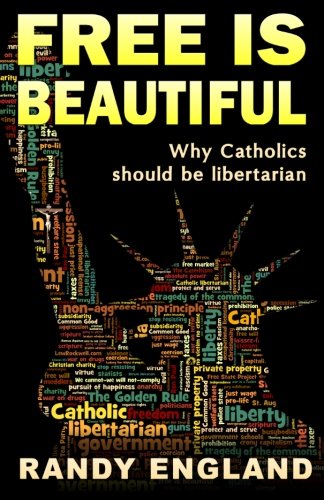 In their presentations, the conference speakers tended to mistake the non-Christian individualism of writers like Ayn Rand as the very heart of libertarianism.

One speaker explained that it is hard for a libertarian to see his neighbor as himself. I have no words for such an accusation. That just seems mean.

The speakers liked to throw around the phrase, the “common good” as if it were synonymous with the welfare state. None bothers to parse the catechism definition which teaches that the common good entails the protection of individual rights and security; and that these are protected when a person is allowed to live life peaceably and without interference. There is nothing in the catechism definition to support the redistribution of wealth by the state. The reason it is called the “common good” is because it is good for everybody, not just the beneficiaries of redistribution.

Another speaker, Matthew Boudway, an associate editor at Commonweal magazine, has posted his own talk at the Commonweal blog. Mr Boudway advises that “if you watch just one of the videos, watch” the remarks of John Dilulio, a political science professor who also served in the Bush administration.

Mr Boudway chose well, because Dilulio levels his sights dead center on those he calls “radical libertarians.” Dilulio takes just twelve minutes during which he caricatures the libertarian viewpoint, then tamps down the dirt on the Catholic libertarian grave, neatly ignoring what Catholic libertarians actually believe and their moral basis for it.

Dilulio argues that libertarianism is incompatible with a Catholic view of society:

As libertarians, we do not refuse to acknowledge “sinful inequalities” in society. True, we often oppose the increasing demands of the state, but Dilulio could not be more wrong in saying that we disfavor government efforts to eliminate sinful inequlities. Here are a few areas ripe for government action:

The sinful inequalities to be eliminated must include benefits that are not enjoyed by all. These include government subsidies to business, protective tariffs, too-big-to-fail corporate bailouts, and the use of eminent domain which destroys whole neighborhoods and takes land for big business at bargain prices. Intellectual property laws–which have the chief effect of protecting monopolies while stifling creativity and productivity–should also be repealed. On top of this, product regulations and occupational licensing requirements limit competition and raise prices, all to the benefit of established businesses. Zoning and other state-mandated land-use restrictions tend in the same direction.

It is time to demolish all the “sinful inequalities” that prevent honest work; time to tear down the state-erected walls that separate workers from earning a living:

The some on the left are critical of the whole idea of working for wages. They argue that the employer/employee relationship is coercive because the poor have no better options. On the other hand, not everyone is cut out to be an entrepreneur, so having more alternatives to working for wages has to be a good thing. If it puts employers and employees on a more even footing, that is good too. All Christians should support the removal of barriers to making a living.

If government is going to level the employment field, it is also time to repeal the minimum wage laws. The reasons are many: here, but the bottom line is that the minimum wage is nothing more than a barrier separating unskilled workers from a job.

While jobs are the top priority in raising up the poor, another way government can help is by getting out of the way of affordable housing by:

These are just a few areas where government could create widespread prosperity with libertarian ideas by eliminating “sinful inequalities.” Of course, this is just a start.

Libertarians want to end foreign military interventions and return the military to a purely defensive role, saving lives and resources that would be much better kept at home. Libertarians would limit the United States’ prison system to people who actually hurt other people and would treat the drug problem as a social and mental health problem, not a criminal one. A country with 5% of the earth’s population and 25% of the inmates–mostly poor and minorities–needs to find a better way.

Love for the poor:

Dilulio goes on to accuse libertarians of having no “manifest love for the poor.” We are, he says, “blind to the ‘another self‘ in others.” And he charges that the humble aphorism,  “There, but by the grace of God, go I,” is “not a

sentiment that much stirs in their souls.” These are serious charges to level against a fellow Christian.

Catholic libertarians believe there is no poorer expression of love for the poor than a willingness to put a gun to our brother’s head with the purpose of making him a charitable man. We prefer voluntary charity, mutual aid, and the removal of all the barriers (noted above) that prevent people from making a dignified living.

Pope Leo XIII taught in the encyclical Rerum Novarum that “Man precedes the State.” Leo wrote that “the domestic household is antecedent, as well in idea as in fact, to the gathering of men into a community, the family must necessarily have rights and duties which are prior to those of community, and founded more immediately in nature.” This natural ordering of society is known as the principle of subsidiarity; that human activity ought to be governed at the lowest level possible, leaving higher orders of community with only those functions which only they can accomplish.

Dilulio knows that libertarians are all in favor of what could be called subsidiarity’s preferential option for governance at the lowest possible level. His criticism centers around libertarians who prefer to make up their own minds about when to kick a particular task upstairs to a higher authority.

Catholic Social teaching would seem to leave some prudential room on the question of when to apply government aggression to gain the cooperation of the people. Coercive violence by government, against its own citizens, is never the preferred option; and–as the Church teaches–the use of force is a sign of a government that does not respect the rights of its citizens. Such a government “can rely only on force or violence to obtain obedience from its subjects.” See Catechism of the Catholic Church, ¶ 1930.

In his closing remarks, Dilulio concedes that there are things to be learned from libertarianism and that government is not the answer for everything. Still, he insists, there can be no doubt that this world would be worse off were it not for the blessings of forced redistribution by government.

“Erroneous Autonomy: The Catholic Case Against Libertarianism” was a refreshing opportunity to see how we libertarians appear to the Catholic left. They got a few bits of it right and much of it wrong; egregiously wrong in taking the measure of our motives. Most importantly, we are getting traction and they know it. We may expect more such efforts ahead.

The Best of Randy England

Randy England [send him mail] is a writer, criminal defense lawyer, frequent co-host of the Freedom Feens broadcast and member of St. Peter Catholic Church in in Jefferson City, Missouri. He is a former prosecutor and grew up near St. Louis, Missouri. Randy is also the author of Free is Beautiful: Why Catholics should be Libertarian, Unicorn in the Sanctuary (Tan Books) and the end times novel, The Last Fisherman: A novel of the last Pope, the anti-christ and the end of the age. Visit his website.

Right on PC, Wrong on JobsLibertarian Reformers Within the State?