Everything About Colloidal Silver

Two thousand, three hundred years ago, Alexander The Great was surveying his battlefield and drinking water from silver urns. He knew nothing about bacteria, but he knew that silver containers have a seemingly miraculous way of keeping water fresh. Silver has been used for thousands of years in different forms for its health benefits. Throughout the middle ages, the wealthy gave their children silver spoons to suck upon to stave off illnesses. People have known about the benefits of silver for so long that it is incorporated into legends. Silver is the recommended agent for killing vampires, werewolves, and various forms of the so-called undead. According to ancient legend, a silver dagger was all that a knight needed to vanquish evil.

The new history of silver is a falsified history. Silver was once used extensively by all health care practitioners as an antibiotic, anti-viral, and as an anti-microbial. Nothing worked better then, and nothing does now. The

F.D.A. began its crusade against silver products in the 1930’s, because silver (as a natural substance) cannot be patented; but the organization’s antibiotic and vaccine industry partners were able to patent their wares. Under the Food and Drug Administration’s original name, the Bureau of Chemistry, its real mission was to legally protect the chemical industry by declaring toxic chemicals to be “generally recognized as safe”, and to eliminate the chemical industry’s competition through regulations. This history has likewise been obscured greatly in most modern historical texts, but the truth can be found in materials from its early period.

Silver medicine has been erased from the textbooks, and it is seldom given mention in medical literature. The official Pharmacopeia (physician’s desk reference book) listed dozens of medicinal silver compounds prior to the mid-1930’s; but thereafter, all mention of silver disappeared. Newer books report that it never really happened. Before the history was rewritten, silver was like the nuclear weapon of medicine. No human pathogen of any kind survived it. This was the gospel of medicine. Pure colloidal silver is still the most comprehensive and potent antibiotic and anti-viral known, which is actually safe for human consumption, and it is absolutely safe for everyone in every condition. It is natural, has no side effects, and it was killing the worst viral diseases in the 1930’s, long before it became impossible to kill viruses with medicine.

Over the past two centuries, silver has been used by both allopathic and alternative medicine. In addition to being used for routine ailments, silver has been used effectively against some of the most notoriously hard to kill illnesses, including tuberculosis and syphilis. It has been used as an anti-bacterial agent that was added to bandages and disinfectant sprays. It has been embedded into clothing to prevent bacteria from producing foul odors from sweat, and it has been merged into cloth that is used in burn centers. Attempts are still being made to lace hospital counter tops with silver, to prevent the growth of bacteria. Silver-lined containers are actively being used to disinfect water in third world countries.

Silver is remarkable because it is an extremely powerful natural anti-bacterial and anti-viral agent, yet it does not impair overall health like antibiotics do. It kills viruses, fungi, and parasites in cases where the parasites live in a symbiotic relationship with a bacterial agent. This is surprisingly common, especially in the case of blood-borne parasites, such as those of U.S. bio-weapons like Lyme disease. Because of the way that silver kills with an electrical charge, no pathogen can be found or engineered to be immune to it. No life can develop an immunity to electricity.

Since the late nineteenth century, colloidal silver has been the safest and most effective way to medicate with silver. Colloidal silver is manufactured by electrically combining silver with pure water. The colloidal manufacturing process uses no chemicals. While silver is now labeled as an alternative medicine, it was once used widely in hospitals as the premiere antiseptic and antibiotic. It is still used in hospital burn centers for its incredible ability to heal burns more rapidly than steroids. We were astounded when witnessing it eliminate a sunburn in the span of just an hour, and a burnt tongue within minutes.

Removing silver from the market was one of the first actions of the Food and Drug Administration when it changed its name in the 1930’s. It has gradually changed its name from the Bureau of Chemistry, to the more publicly palatable, Food and Drug Administration. In 1999, after a re-emergence of silver, the F.D.A. completely banned it in any form from being sold in over-the-counter health products, despite the fact that silver has safely been used as a medicine for millennia.

The devastation of the polio epidemic was largely caused by how the Food and Drug Administration suppressed silver to promote its new antibiotics and vaccine industries. By removing silver from the lists of approved medicines, it effectively removed the only treatment that reliably kills polio, which in-turn unleashed the full epidemic of polio. The F.D.A. later claimed a victory over polio in boasting that the new generation of vaccines had saved us. The agency cunningly waited until the epidemic was in its natural decline to release the vaccine, in order to ensure that people saw a connection between the vaccine’s release date and the disappearance of the disease. The public, and quite a few doctors, were distracted away from the fact that silver medications were a safe treatment, which effectively kills polio quickly, as well as virtually every other virus known. Prior to this entire smoke-and-mirrors routine, silver was recognized for doing what the establishment now claims is impossible. Had silver medicine not been stripped from the market, the polio epidemic would have never occurred. Today’s huge vaccine and antibiotics markets would have never come into being. Silver had to go. Just to stack the dishonest vaccine marketing even more, the F.D.A. and the American Medical Association began promoting tonsillectomies for all children at the same time, while knowing that the tonsils are the only organ in the human body that produces polio antibodies.

The Food and Drug Administration now admits that antibiotic drugs are useless for most of the conditions that they have been prescribed during the last seven decades. The common cold, flu, and the most common type of pneumonia are all now believed to be caused by viruses for which antibiotics are useless against. However, silver is effective against viruses, so untold people have died as a result of silver being replaced with antibiotics.

Another suppression campaign against silver began around the time of the Second World War, when germ warfare agents were being increasingly studied as the new generation of warfare. Silver has the ability to neutralize every bio-weapon that has ever been created, because of how it attacks pathogens electrically. This is one of the primary reasons why it has been suppressed and maligned so aggressively. There are groups within the U.S. Government who do not want anyone to be resistant to U.S. Military bio-weapons, so silver medications have been repressed throughout the world for the sake of a covert military weapons program that is forbidden by international laws. If silver medicine was still being distributed officially as the top tier of medicine, then the bio-weapons program would be rendered impotent, because victims could simply use colloidal silver to recover from any germ warfare agent.

How Silver Medicine is Believed to Work

There are theories about how silver works. The leading one is that silver kills bacteria and viruses electrically, which would make it impossible for pathogens to become resistant to it. Indeed, it is true that there is no evidence of pathogens developing any resistance to colloidal silver. This hypothesis is impossible to prove (or disprove), because we cannot examine a single colloidal particle and its relation to a bacterium, or view the mechanism through which silver kills the latter. We can merely put colloidal silver and bacteria together, and see that all of the bacteria dies rapidly.

There is evidence that silver interferes with copper and iron in the body, by binding with both electrically to chemically form new metallic compounds. People who are using a large amount of colloidal silver regularly may begin to crave foods that are rich in iron, such as beef. It is wise to satisfy these cravings, since they are caused by a deficiency of an important nutrient. Copper can be safely supplemented through the use of chlorophyll, but virtually every other oral source of copper supplementation is dangerous, because it is so trivially easy to overdose with it and cause liver damage. Due to colloidal silver’s ability to neutralize iron, men over the age of 30 will benefit from occasional colloidal silver supplementation. Iron accumulation in the bodies of men is believed to be one of the key reasons why women live longer than men do, and excessive iron is a major contributor to heart disease in men. 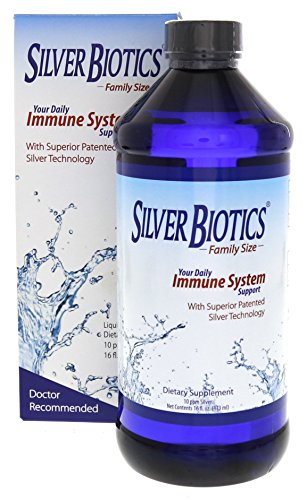 Why Stand Up for Liberty? Want To Learn More About Anarcho-Capitalism?