For centuries, researchers have been debating if, in pre-Columbian times, meaningful exchanges between the indigenous peoples of Asia and the Americas ever occurred. Periodically, over the past 250 years knowledgeable sinologists and oceanographers have written positively on this topic, yet, so far, no conclusive proof has been put forth establishing such trans-Pacific contact as a historical event.

Now in a published research manuscript Dr. John Ruskamp provides previously unrecognized and compelling new epigraphic evidence, in the form of ancient North American Chinese rock writings that he has identified interspersed among otherwise Native American petroglyphs and pictographs, establishing that in pre-Columbian times literate Asians did indeed traverse the Pacific Ocean to North America, shortly after 1150 BC. 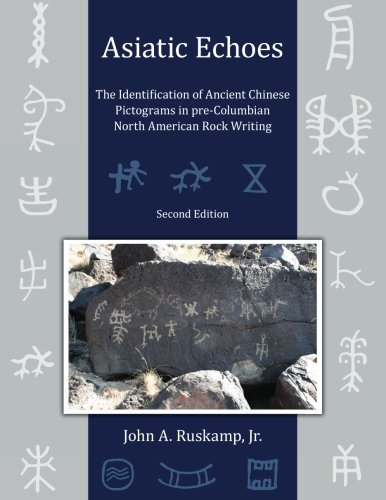 In his discourse, Ruskamp provides the reader with multiple examples of individual, paired, and in some cases widely dispersed ancient Chinese pictograms, all of which appear with otherwise native rock art at numerous scattered sites across North America. And, as knowledge of these symbols was extinguished from mankind’s memory by imperial Chinese declarations shortly after 1150 BC, which prohibited their use, the study’s rock art imagery cannot be viewed as recent specious fabrications. (Note: These lost symbols were only relatively recently rediscovered at Anyang, China in 1899, long after the study’s petroglyphs and pictograms were created.) Moreover, Ruskamp contends that Native Americans appropriated some of these ancient Chinese symbols for use in their own writings, a form of communication that most anthropologists do not credit them with having utilized.