How to Recharge Alkaline Batteries

About a month ago, I learned that it was possible not not only to test old alkaline batteries to see if they are still are usable, but also that, with the right type of charger, you can bring dead batteries back to life and that you can actually recharge alkaline batteries.  To be quite honest, I was blown away.

Being a dutiful citizen of the world, when a flashlight. computer mouse, or portable  electronic gizmo such as a remote control stopped working, I dumped the old batteries into my recycle box and installed some new ones.  Of course not being wasteful, I favored the use of rechargeable batteries and was quite proud of my collection of various sized eneloop batteries which hold their charge for up to three years, even while sitting on the shelf.

A LADY ON A MISSION

Do you every get a bug in your bum and decide that nothing will stop you from the mission or task at hand?  Well that was me.  I wanted to prove to myself that old alkaline batteries were still usable and further, as Dennis 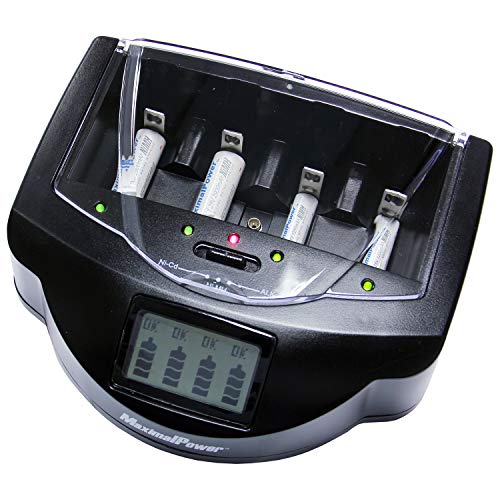 Evers (Preparedness is Fundamental) says, you can have free batteries for life.

The first thing I needed to do was to gather up the gear:

Simple enough although I did have to purchase the tester and the charge.  But more on that later.

SORT THROUGH THE BATTERIES AND CULL THE DUDS

For years I have been saving all of my old batteries in a box in the garage, thinking that one of these days I would find someplace to recycle them.  Where I live that is easier said than done so the box was pretty darn full which was great because that meant I had a lot of raw material to work with.

While waiting for my battery tester and alkaline charger to arrive, I sorted through the box, weeding out any leakers as well as odd ball batteries such as cell phone and hearing aid batteries.  According to Wikipedia, the reason a battery leaks is this:

As batteries discharge — either through usage or gradual self-discharge — the chemistry of the cells changes and some hydrogen gas is generated. This out-gassing increases pressure in the battery. Eventually, the excess pressure either ruptures the insulating seals at the end of the battery, or the outer metal canister, or both. In addition, as the battery ages, its steel outer canister may gradually corrode or rust, which can further contribute to containment failure.

Surprisingly, most of the batteries in my box were clean.  Something to keep in mind as you go through the sorting process is that if there is even a single leaker in the box, the residue can spread on to other batteries so it helps to have a rag handy to wipe each battery off to see if it is okay.  If you even suspect that a battery has leaked, or if shows any rust or corrosion, don’t take a chance.  Throw the baddies back in to the recycle box.

WHO SAYS THAT DEAD BATTERY IS REALLY DEAD?

I purchased an inexpensive battery tester from Amazon.  There was nothing special about it and it was easy to use.  Plus, it had the ability to test 9V batteries as well as button batteries and the traditional AA, AAA, C and D sized batteries.

I then set to work, testing each and every battery in my box.  Much to my surprise, there were a number of batteries that tested “fully charged”. It is interesting to note that many were 9 Volt batteries that came out of one of my carbon monoxide detectors. This leads me to believe that the detector is bad and not the batteries.

Furthermore, I now believe that what commonly happens is that, for example, a remote control or flashlight is dead.  You dump the batteries into the recycle box and install new ones.  Easy peasy.  But in truth, perhaps only a single battery of the 2 or 3 are bad so in effect, you are dumping out 1 discharged battery and 2 or 3 perfectly usable batteries.  I even proved this myself.  Since I now keep one of these $8 testers in my desk drawer, when my wireless mouse died a couple of days ago, I found that only one of the two AAA batteries that I had removed was dead.  The other was showing almost a full charge.  Go figure.

The other thing, and something that makes me feel careless and stupid, there were some perfectly good rechargeable batteries in the box.  Now how the heck did that happen?

The Best of Gaye Levy

The Wake and Chill DrinkDon’t Be Powerless