Limited Government Is a Vain Hope

Lew Rockwell has set himself a difficult task. He has written Against the State, not for the already convinced libertarian, eager to discuss the latest theoretical refinements, but rather for the concerned citizen who senses that something is wrong with our political system and wonders what to do about it. Such readers are apt to recoil in horror at the mention of anarchism, but it is precisely Rockwell’s aim to convert such skeptical readers to anarcho-capitalism, of the sort defended by Murray Rothbard.

With that audience as his target, Rockwell has followed a three-part strategy. First, he shows that the present situation is so bad that radical remedies must be considered. Second, he blocks the main remedy that will at once occur to many of his readers. They will agree with him that the American state has become tyrannical, but at first they will seek a less radical answer than Rockwell’s. They will suggest that the key fault of our government is that it has overthrown the constitutional regime established by the Founding Fathers. We have only to return to the American tradition of limited government, and our present political ills will dissipate. It is a key task of the book to disarm this response. Only after the first two parts of the strategy have been laid out will readers be in a position to appreciate the case for anarchism.

Rockwell begins with a fundamental criticism of the contemporary American state. As you would expect from a student of Murray Rothbard, he assails the war and imperialism that dominateAmerican foreign policy.

The main aim of American foreign policy is to impose the will of our ruling elite on the rest of the world. In doing so, we have inflicted massive death and destruction, without moral justification. When she was Secretary of State, Madeleine Albright expressed the attitude of the American state elite with chilling clarity. On the 60 Minutes program, May 12, 1996, Lesley Stahl asked Albright about the economic sanctions the US was imposing on the Saddam Hussein regime in Iraq. Stahl inquired, “We have heard that half a million children have died. I mean, that’s more children than died in Hiroshima. And, you know, is the price worth it?” and Albright replied “we think the price is worth it.”

Such a bloodthirsty policy is unfortunately not an aberration. Rockwell shows that war in pursuit of empire has dominated twentieth-century American foreign policy. Woodrow Wilson believed that

America … had a mission to bring democracy to the world … Wilson, though extremely pro-British, began the process of replacing Britain with America as the dominant world power. Throughout the twentieth century, we see this constant pattern: America has used democratic rhetoric to impose American world domination.

The policy of world domination continued during the Cold War. Following Murray Rothbard, Rockwell holds that the “war” that the Communists waged against us was ideological. Though Communists might preach revolution, Soviet foreign policy posed no direct threat to America.” In point of fact, America’s aggressive policy had as its principal aim to secure control by the government of the American economy by making it dependent on government spending. Rockwell shows that despite President Eisenhower’s much-touted farewell speech warning against unwarranted influence of the military-industrial complex, Eisenhower played a primary role in securing the continuing dominance of that very “complex” over the economy.

How should we respond to imperialism and war? One answer is to return to the traditional American policy of Washington and Jefferson. America before the twentieth century did indeed avoid entanglement in European affairs, but

to say, “we need to return to the foreign policy of the Founders” won’t solve our problem. Even if we did this, we would still be violating the just war principles that Rothbard has set out. And let’s not forget the War of 1812, in part motivated by the wish to conquer Canada, and the Mexican War, aptly called in a recent book A Wicked War.

The American state does not confine its belligerent activities to those unfortunate enough to dwell overseas. Increasingly, the state assaults its own citizens, as Rockwell makes abundantly clear. The “war on drugs” has filled our prisons with people who have presumed to ingest substances that the state forbids. The “war on terror” has been the excuse for a massive assault on our liberties. Local police have increasingly come to adopt militarized tactics, in the style of colonial administrators dealing with subject populations.

Following the classic analysis of John T. Flynn in As We Go Marching (1944), Rockwell describes the American state as fascist.

Fascism is the system of government that cartelizes the private sector, centrally plans the economy to subsidize producers, exalts the police State as the source of order, denies fundamental rights and liberties to individuals, and makes the executive State the unlimited master of society. 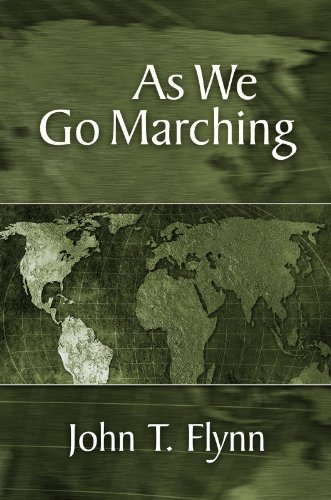 Reading about the horrendous behavior of the state may well be depressing; but as F.H. Bradley said, “where everything is bad, it must be good to know the worst.” Given the manifest evils and failures of the state, what should we do? Many in Rockwell’s audience will seek a solution in “limited government.” If only we return to the Constitution as intended by its Framers, all will be well.

Rockwell very effectively brings out that this is a vain hope. The notion of limited government is incapable of being realized in practice. If there is a monopoly government, any limitations on the government must be ones the government has imposed on itself. To expect this sort of limitation to be effective is futile.

As Rockwell puts the point:

This solution can’t work. It suffers from a fatal flaw. The Constitution creates a government that is the judge of its own powers. The branches of the government, legislative, executive, and judicial, are in theory supposed to check and balance each other. The problem with this is that the Supreme Court, which as the Constitution has developed has become the highest arbiter of constitutional issues, is itself part of the federal government. In a dispute between the federal government and the people, it is unlikely to side against the government.

If limited government will not work, what is to be done? Rockwell finds the answer in the free market. If competition works well for all other goods and services, why not for protection and defense as well? What is supposed to be “special” about these latter services that requires us to abandon the proved lessons of experience?

But how exactly would anarchism operate? In a way greatly influenced by Rothbard, Rockwell describes the activities of libertarian defense agencies. These agencies follow a libertarian law code, based on natural law.

We could go on at greater length about the libertarian law code, but for our purposes, there is no need to do so. Once we have self-ownership and property rights, that’s all we need. Individuals are then free to make whatever exchanges they wish. This is the basis on which the free market can get started.

Rockwell has wisely avoided a mistake. “Anarcho-capitalism means relying on the free market in everything; and we can’t specify in advance exactly how the free market will work. Leonard Readpointed out in a classic account that when something has been socialized, people jump to the conclusion that the market can’t provide it:” Against the State is not, in the phrase of Marx and Engels in the Communist Manifesto, one of the “duodecimo editions of the New Jerusalem.”

Against the State merits the careful attention of everyone who wishes to live in freedom.

Another Rotten US War on Iraq?Bowe Knows