Can you Tell a Man's Intelligence Simply by Looking at him? Yes

By Rik Myslewski
The Register

A group of Czech researchers has conducted a study in which they determined that the perceived intelligence of men correlates strongly with their actual intelligence – but the same doesn’t hold true for women.

“Both men and women were able to accurately evaluate the intelligence of men by viewing facial photographs,” the researchers write in a paper published in the online, peer-reviewed journal, PLOS ONE. However, “No relationship between perceived intelligence and IQ was found for women.”

The study was based on still photos of 40 male and 40 female biology students at Charles University in Prague. “The subjects were instructed to adopt a neutral, non-smiling[amazon asin=B002RAS7UQ&template=*lrc ad (right)] expression,” the paper details, “and avoid facial cosmetics, jewellery, and other decorations. The photos were cropped to place the eyes horizontally at the same height and leave a standard length of neck visible.”

The photos were then rated for perceived intelligence by 43 women and 42 men who had no connection with the University’s Faculty of Science, from which the photographed and IQ–tested subjects were recruited. A different 42 women and 33 men rated the same photos for attractiveness. Each of the men and women rating the photos did so for all 80 of the subjects 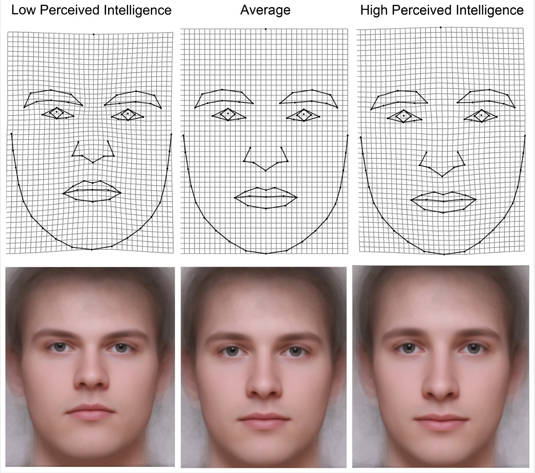 Ride the Highroller! We Need Total Sex and Race Equality