Whenever the beltway bandits run low on excuses to run-up the national debt they trot out florid tales of crumbling infrastructure—that is, dilapidated roads, collapsing bridges, failing water and sewer systems, inadequate rail and public transit and the rest. This is variously alleged to represent a national disgrace, an impediment to economic growth and a sensible opportunity for fiscal “stimulus”.

But most especially it presents a  swell opportunity for Washington to create millions of “jobs”.  And, according to the Obama Administration’s latest incarnation of this age old canard, it can be done in a fiscally responsible manner through the issuance of “green ink” bonds by a national infrastructure bank, not “red ink” bonds by the US Treasury. The implication, of course, is that borrowings incurred to repair the nation’s allegedly “collapsing” infrastructure would be a form of “self-liquidating” debt. That is, these “infrastructure” projects would eventually pay for themselves in the form of enhanced national economic growth and efficiency.

Except that the evidence for dilapidated infrastructure is just bogus beltway propaganda cynically peddled by the construction and builder lobbies. Moreover, the infrastructure that actually does qualify for self-liquidating investment is overwhelmingly local in nature—-urban highways, metropolitan water and sewer systems, airports. These should be funded by user fees and levies on local taxpayers—not financed with Washington-issued bonds and pork-barreled through its wasteful labyrinth of earmarks and plunder.

Nowhere is the stark distinction between the crumbling infrastructure myth and the factual reality more evident than in the case of the so-called deficient and obsolete bridges. To hear the K-Street lobbies tell it—-motorist all across America are at risk for plunging into the drink at any time owing to defective bridges.

Even Ronald Reagan fell for that one. During the long trauma of the 1981-1982 recession the Reagan Administration had stoutly resisted the temptation to implement a Keynesian-style fiscal stimulus and jobs program–notwithstanding an unemployment rate that peaked in double digits. But within just a few months of the bottom, along came a Republican Secretary of Transportation, Drew Lewis, with a Presidential briefing on the alleged disrepair of the nation’s highways and bridges. The briefing was accompanied by a Cabinet Room full of easels bearing pictures of dilapidated bridges and roads and a plan to dramatically increase highway spending and the gas tax.

Not surprisingly, DOT Secretary Drew Lewis was a former governor and the top GOP fundraiser of the era. So the Cabinet Room was soon figuratively surrounded by a muscular coalition of road builders, construction machinery suppliers, asphalt and concrete vendors, governors, mayors and legislators and the AFL-CIO building trades department. And if that wasn’t enough, Lewis had also made deals to line up the highway safety and beautification lobby, bicycle enthusiasts and all the motley array of mass transit interest groups.

They were all singing from the same crumbling infrastructure playbook. As Lewis summarized, “We have highways and bridges that are falling down around our ears—that’s really the thrust of the program.”

The Gipper soon joined the crowd. “No, we are opposed to wasteful borrow and spend”, he recalled,”that’s how we got into this mess. But these projects are different. Roads and bridges are a proper responsibility of government, and they have already been paid for by the gas tax”.

By the time a pork-laden highway bill was rammed through a lame duck session of Congress in December 1982, Reagan too had bought on to the crumbling infrastructure gambit. Explaining why he signed the bill, the scourge 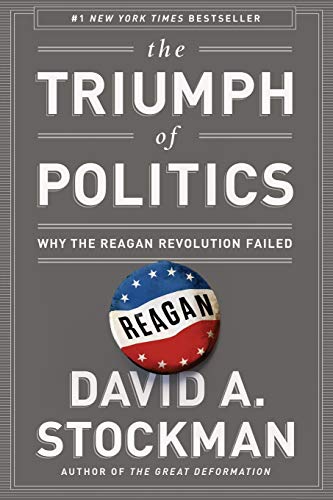 of Big Government noted, “We have 23,000 bridges in need of replacement or rehabilitation; 40 percent of our bridges are over 40 years old.”

Still, this massive infrastructure spending bill that busted a budget already bleeding $200 billion of red ink was not to be confused with a capitulation to Keynesian fiscal stimulus. Instead, as President Reagan explained to the press when asked whether it was a tax bill, jobs bill or anti-recession stimulus, it was just an exercise in prudent governance: “There will be some employment with it, but its not a jobs bill as such. It is a necessity…..(based) on the user fee principle–those who benefit from a use should share its cost”.

Needless to say, none of that was remotely true. Twenty percent of the nickel/gallon gas tax increase went to mass transit, thereby breeching the “user fee” principle at the get-go, and paving the way for endless diversion of gas taxes to non-highway uses. Indeed, today an estimated 40% of highway trust fund revenues go to mass transit, bicycle paths and sundry other earmarks and diversions.

More importantly, less than one-third of the $30 billion authorized by the 1982 bill went to the Interstate Highway System—the ostensible user fee based national infrastructure investment. All the rest went to what are inherently local/regional projects—-state highways, primary and secondary roads, buses, and mass transit facilities.

And this is where the tale of Madison County bridges to nowhere comes in; and also where the principle that local users and taxpayers should fund local infrastructure could not be more strikingly illustrated.

It seems that after 32 years and tens of billions of Federal funding the nations bridges are still crumbling and in grave disrepair. In fact, according to DOT and the industry lobbies there are 63,000 bridges across the nation that are “structurally deficient”, suggesting that millions of motorists are at risk for a perilous dive into the drink.

But here’s the thing. Roughly one-third or 20,000 of these purportedly hazardous bridges are located in six rural states in America’s mid-section: Iowa, Oklahoma, Missouri, Kansas, Nebraska and South Dakota. The fact that these states account for only 5.9% of the nation’s population seems more than a little incongruous but that isn’t even half the puzzle. It seems that these thinly populated country provinces have a grand total of 118,000 bridges. That is, one bridge for every 160 citizens—men, women and children included.

And the biggest bridge state among them is, well, yes, Iowa. The state has 3 million souls and nearly 25,000 bridges–one for every 125 people. So suddenly the picture is crystal clear. These are not the kind of bridges that thousands of cars and heavy duty trucks pass over each day. No, they are mainly the kind Clint Eastwood needed a local farm-wife to locate—so he could take pictures for a National Geographic spread on covered bridges.

Stated differently, the overwhelming bulk of the 600,000 so-called “bridges” in America are so little used that the are more often crossed by dogs, cows, cats and tractors than they are by passenger motorists.  They are essentially no different than local playgrounds and municipal parks. They have nothing to do with interstate commerce, GDP growth or national public infrastructure.

If they are structurally “deficient” as measured by engineering standards that is not exactly a mystery to the host village, township and county governments which choose not to upgrade them. So if Iowa is content to live with 5,000 bridges—one in five of its 25,000 bridges— that are deemed structurally deficient by DOT, why is this a national crisis? Self-evidently, the electorate and officialdom of Iowa do not consider these bridges to be a public safety hazard or something would have been done long ago.

The evidence for that is in another startling “fun fact” about the nation’s bridges.  Compared to the 19,000 so-called “structurally deficient” bridges in the six rural states reviewed here, there are also 19,000 such deficient bridges in another group of 35 states–including Texas, Maryland, Massachusetts,  Virginia, Washington, Oregon, Michigan, Arizona, Colorado, Florida, New Jersey and Wisconsin, among others. But these states have a combined population of 175 million not 19 million as in the six rural states; and more than 600 citizens per bridge, not 125 as in Iowa.

Moreover, only 7% of the bridges in these 35 states are considered to be structurally deficient rather than 21% as in Iowa. So the long and short of it is self-evident: Iowa still has a lot of one-horse bridges and Massachusetts— with 1,300 citizens per “bridge”— does not. None of this is remotely relevant to a national infrastructure crisis today—any more than it was in 1982 when even Ronald Reagan fell for “23,000 bridges in need of replacement or rehabilitation”.

Yes, the few thousands of bridges actually used heavily in commerce and passenger transportation in America do fall into disrepair and need  periodic reinvestment. But the proof that even this is an overwhelmingly state and local problem is evident in another list maintained by the DOT.

That list would be a rank ordering called “The Most Travelled Structurally Deficient Bridges, 2013″. These are the opposite of the covered bridges of Madison County, but even here there is a  cautionary tale. It seems that of the 100 most heavily traveled bridges in the US by rank order, and which are in need of serious repair, 80% of them are in California!

Moreover, they are overwhelmingly state highway and municipal road and street bridges located in Los Angeles, Orange County and the Inland Empire. Stated differently, Governor Moonbeam has not miraculously solved California’s endemic fiscal crisis; he’s just neglected the local infrastructure. There is no obvious reasons why taxpayers in Indiana or North Carolina needed to be fixing California’s bridges— so that it can continue to finance its outrageously costly public employee pension system.

And so it goes with the rest of the so-called infrastructure slate. There is almost nothing there that is truly national in scope and little that is in a state of crumbling and crisis.

Indeed, the one national asset—the Interstate Highway System—is generally in such good shape that most of the “shovel ready” projects on it during the Obama stimulus turned out to be resurfacing projects that were not yet needed and would have been done in the ordinary course anyway, and the construction of new over-passes for lightly traveled country roads that have happily been dead-ends for decades.

One thing is clear. The is no case for adding to our staggering $17 trillion national debt in order to replace the bridges of Madison county; or to fix state and local highways or build white elephant high speed rail systems; or to relieve air travelers of paying user fees to upgrade local airports or local taxpayers of their obligation to pay fees and taxes to maintain their water and sewer systems.

At the end of the day, the ballyhooed national infrastructure crisis is a beltway racket of the first order. It has been for decades.

Here is the bridge data in all its splendid detail!

The following table shows the ranking of states according to number of deficient bridges (left hand side) and percentage of bridges defective (right hand side): The nation’s 250 most heavily traveled bridges in need of repair are ranked in the following table: Previous article by David Stockman: That Was Quick