The following text was presented  at the Rosa Luxemburg Conference, Berlin, January 11, 2014.

The event was organized by the German daily “junge Welt”.  This year, the Rosa Luxemburg Conference marked the commemoration of the 100th anniversary of the First World War.

In this regard, the history of wars is important because it helps us understand today’s wars.

The concept of the Long War is part of US military doctrine since the end of World War II. In many regards, todays wars are a continuation of the Second World War.

Worldwide militarization is also part of a global economic agenda, namely the application of the neoliberal economic policy model which has led to the impoverishment of large sectors of the World population.

The world is at the crossroads of the most serious crisis in modern history. The US has embarked on a military adventure, “a long war”, which threatens the future of humanity. This “war without borders” is being carried out at the crossroads of the most serious economic crisis in World history, which has been conducive to the impoverishment of large sectors of the World population.

The Pentagon’s global military design is one of world conquest. The military deployment of US-NATO forces is occurring in several regions of the world simultaneously.

The concept of the “Long War” has characterized US military doctrine since the end of World War II. Worldwide militarization is part of a global economic agenda.

Militarization at the global level is instrumented through the US military’s Unified Command structure: the entire planet is divided up into geographic Combatant Commands under the control of the Pentagon. US Strategic Command (USSTRATCOM) Headquarters in Omaha, Nebraska plays a central role in coordinating military operations.

According to former NATO Commander General Wesley Clark, the Pentagon’s military road-map consists of a sequence of war theatres: 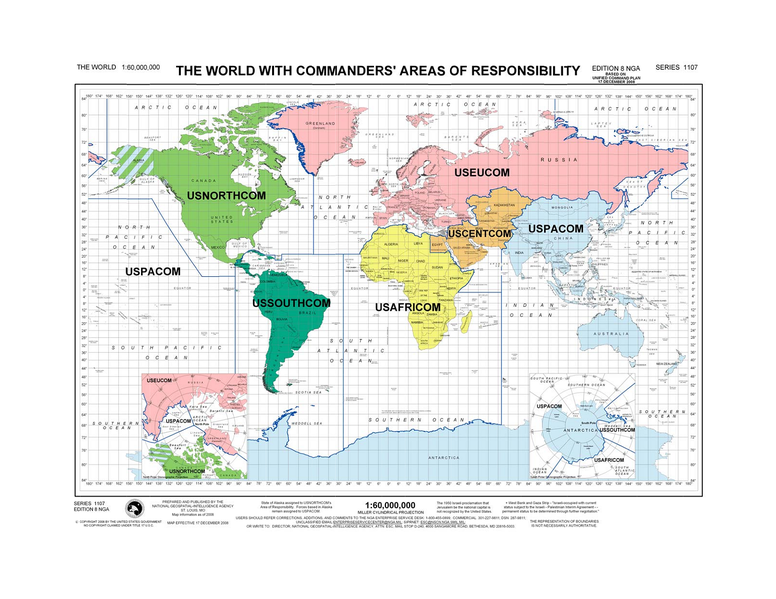 The ongoing war on Syria is a stepping stone towards a war on Iran, which could lead to a process of military escalation.

Russia and China, which are allies of both Syria and Iran, are also targeted by US-NATO. In the wake of the Cold War, nuclear weapons are no longer a weapon of last resort (deterrence), their use is now contemplated in conventional war theatre.

The road to Tehran goes through Damascus. A US-NATO sponsored war on Iran would involve, as a first step, a destabilization campaign (“regime change”) including covert intelligence operations in support of Al Qaeda affiliated rebel forces directed against the Syria. .

The geopolitics of oil and oil pipelines is crucial in the conduct of these military operations.  The broader Middle East- Central Asian region encompasses more than 60 percent of the World’s oil reserves. An all out military attack on Syria would lead to the integration of these separate war theaters, eventually leading towards a broader Middle East-Central Asian war, engulfing an entire region from North Africa and the Mediterranean to Afghanistan, Pakistan and China’s Western frontier.

The 2000 Project for the New American Century (PNAC), first formulated by the NeoCons, was predicated on “waging a war without borders”.

The PNAC’s declared objectives were to “fight and decisively win multiple, simultaneous major theater wars” in different regions of the world as well as perform the so-called military “constabulary” duties “associated with shaping the security environment in critical regions”. Global constabulary implies a worldwide process of military policing and interventionism, including covert operations and “regime change”, all of which are carried out in accordance with a “humanitarian mandate”.

Why the US Has Lost Manufacturing JobsGovernment Has Forked Tongue