Was the Boston Bombing a 'Dry-Run Disaster' Gone Live?

Because the mainstream media outlets continue to treat questions concerning the possibility of false flag terrorism in the Boston bombing as absurd, the alternative media is left with the job of investigating this angle. For those considering this possibility, the evidence of drills is key in determining if the attacks might have been carried out through the establishment bureaucracy. So how likely is it that there were drills being run at the Boston Marathon?

A 2008 article from the Boston Globe indicates that it is very likely, as it explains the value of holding disaster drills during massive events like the Boston Marathon. The article by Arnold Bogis titled, “Marathon as a dry-run disaster” states ”today thousands of runners and hundreds of thousands of spectators are unwittingly taking part in a planned disaster.” While that may sound dangerous, Bogis assures us that the people are not only safe but they are actually making the, “citizens of Greater Boston safer in case of a natural catastrophe or terrorist attack.”

As a former policy analyst for a Department of Homeland Security grant at George Washington University’s Homeland Security Policy Institute, Bogis goes on to explain that organizers see these, “annual gatherings of hundreds of thousands of people” as perfect opportunities to, “evaluate new technologies” and “exercise disaster plans.” He states that to successfully manage the marathon, public safety agencies, “must have relationships…with a diverse set of private organizations” so that, “When a real disaster strikes, these contacts can be called upon to lend needed supplies and other assistance.” He finishes the article by saying:

“Massachusetts is better prepared for a real disaster because every Patriot’s Day and Fourth of July is treated as a ‘disaster.’ Instead of constant warnings about the inevitability of another terrorist attack or natural catastrophe, the public would be better served if this type of local homeland security innovation were promoted and adopted elsewhere.”

Every Patriot’s Day is treated as a disaster? Is there any reason to believe that this wasn’t the case this year? Arnold Bogis updates us in a Homeland Security blog in April of 2011 with an article titled, “The Boston Marathon: In preparedness, the old is new again.” His blog post outlines, “similarities between what (Presidential Policy Directive 8 ) calls for and the actions of Boston officials in preparing for and running the Boston Marathon as a ‘planned disaster.’” He explains:

“…today, in addition to being Tax Day, is Patriot’s Day in Massachusetts and the day on which the Boston Marathon is run. Why is this relevant to homeland security? As I wrote in and op-ed in the Boston Globe a few years ago: Today thousands of runners and hundreds of spectators are unwittingly taking part in a planned disaster.”

A recent ESPN article adds more information, reporting that, “… in recent years the Boston Marathon has become a training ground for state and local officials to develop their response to large-scale catastrophe, whether man-made (like terrorism) or natural (like an extreme heat wave.)” It goes on to say that the 2008 marathon turned into, “something of an anti-cataclysm laboratory as local agencies cooperated with tech companies and research facilities, bringing an impressive array of hardware to defend the event from disaster.”

According to the article, similar efforts were made at the 2009 marathon when, “the City of Boston first used an ‘enhanced situational awareness’ system developed by Raytheon.” The project named Athena, “integrated video, mapping and tracking software across the city’s police, fire and port security departments into one set of information that any public safety official could use.”

The dry-run disaster training continued into 2012 when the marathon, “deployed the Next-Generation Incident Command System…” The NICS is a, “sort of real-time virtual whiteboard developed by the Lincoln Laboratory, a federally funded research center at MIT.”

This presentation put out by Richard Serino, the former Chief of Boston EMS, describes some of the aspects of these, “planned disasters.” It is titled, “Marathons – A Tale of Two Cities and the Running of a Planned Mass Casualty Event.” The document itself is not dated but the URL includes the year 2008. Under the section titled, “Collaboration” it recommends utilizing, “special events and drills as opportunities to plan and train together…” The subsection titled, “Working with the Media,” states, “Their mission is to get a story. Building a longstanding relationship with journalists and reporters ensures that they get the right story and that they serve as a resource when needed.” Serino was appointed by Obama as FEMA’s Deputy Administrator in 2009.

Another presentation by Serino, dated, “sept 2007″ in the URL , includes the Boston Marathon being used in, “Planned Disasters,” under the section, “Special Operations.”

So while the public thinks of the Boston Marathon as a yearly sporting event, the government views it as a yearly disaster planning/counter terrorism exercise. Since these exercises have been carried out from at least 2007 to 2012, it seems perfectly reasonable to believe they would have had similar drills this year. In fact a local Boston news station, Local15TV.com, covered a reliable eyewitness report of this kind of drill taking place at the time of the event. University of Mobile’s Cross Country Coach, Alastair Stevenson, told the local newscasters that, “They kept making announcements on the loud speaker that it was just a drill and there was nothing to worry about. It seemed like there was some sort of threat, but they kept telling us it was just a drill.”

While alternative websites covered the report, the mainstream media ignored it and failed to follow it up. Instead the job was left to independent journalist Anthony Gucciardi who did what a real journalist should do. He got an interview with the eyewitness, who then confirmed exactly what he had said earlier:

“At the start at the event, at the Athlete’s Village, there were people on the roof looking down onto the Village at the start. There were dogs with their handlers going around sniffing for explosives, and we were told on a loud announcement that we shouldn’t be concerned and that it was just a drill. And maybe it was just a drill, but I’ve never seen anything like that — not at any marathon that I’ve ever been to. You know, that just concerned me that that’s the only race that I’ve seen in my life where they had dogs sniffing for explosions, and that’s the only place where there had been explosions.”

Pictures showing a man walking on a rooftop at the scene seem to add weight to the eyewitness observations. Other pictures from the event have surfaced that appear to show members of a private military/security firm who were standing near the finish line at some point before the explosion.Gucciardi compares the pictures of their gear with that of private military/security firm Craft International.

Here below are a few of the pictures turned up by 4chan and others. 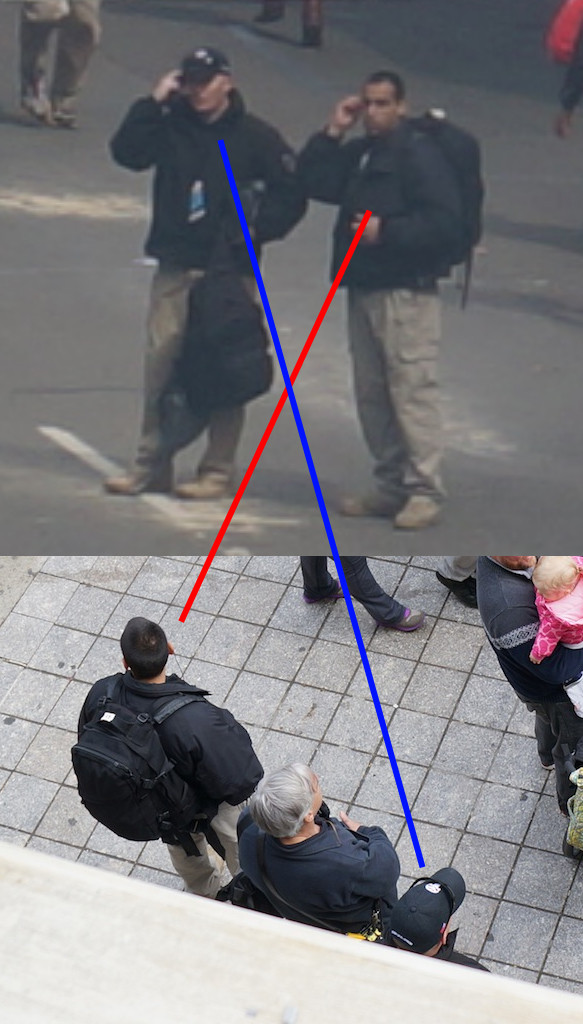 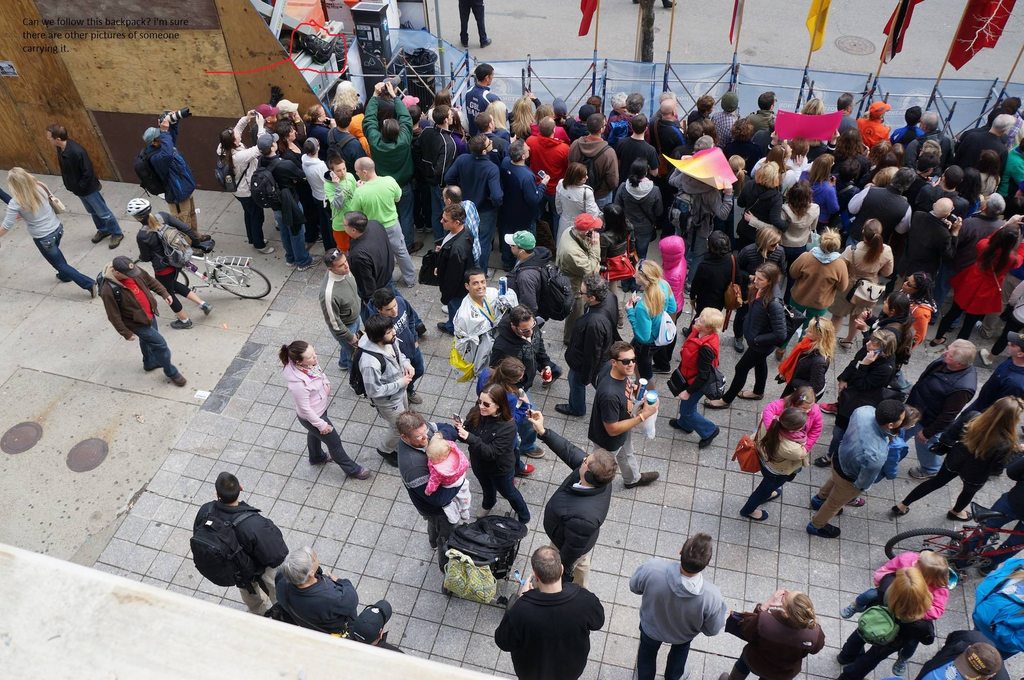 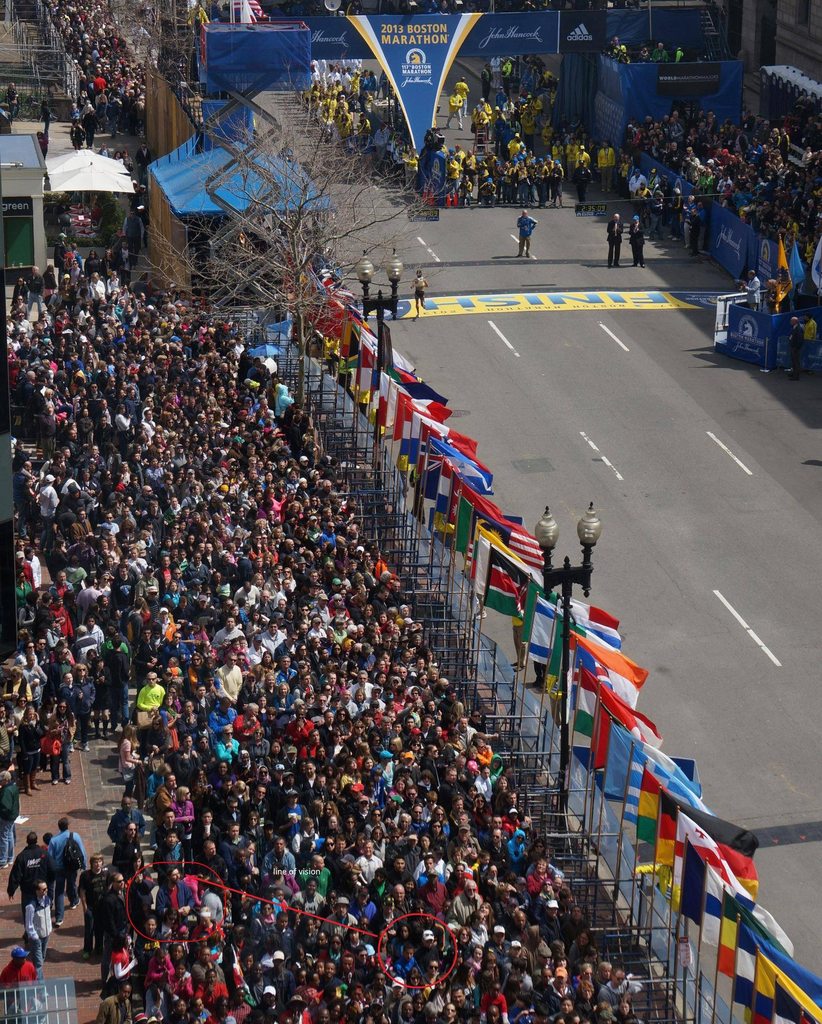 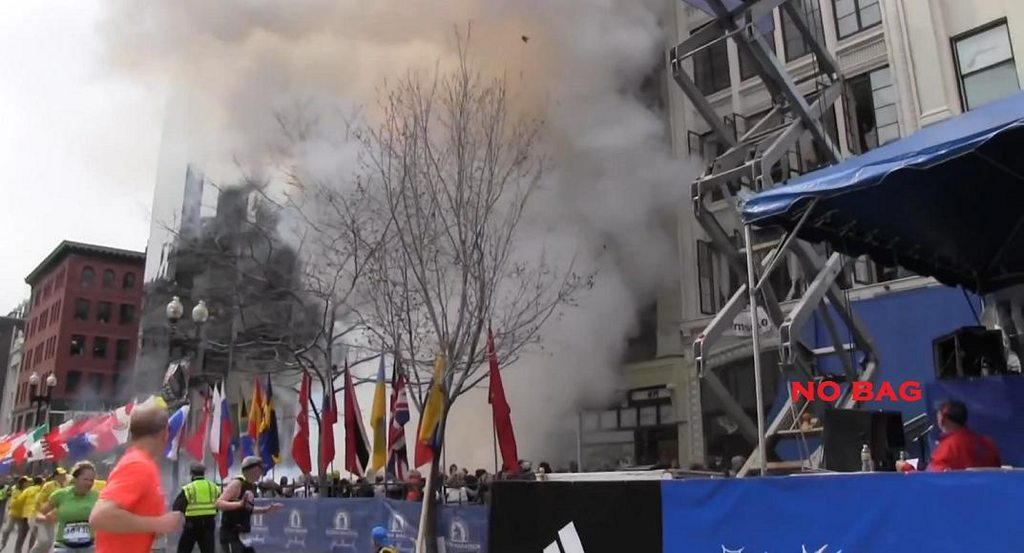 The previously mentioned Boston Globe article from 2008 gives examples of technologies tested in past races like, “a tracking system that utilizes barcodes and hand scanners to log a patient’s condition and location.” Another picture shows a man at the finish line after the explosion wearing similar clothing to the other two and holding on to some sort of handheld electronic device. Mike Adams thinks it is most likely an “Inspector Radiation Alert” device and the picture he has found seems like a close match. Mike Adams has also turned up some more pictures of men dressed like “private security.”

Here below is the picture taken by Dan Lampariello, of the unidentified man on the building during the Boston Marathon bombing.

Of course this is a lot of speculation and I don’t have any “theories” about what really happened. But there are many reasons to question how this attack took place. Often, foiled terror attacks presented in the news, later turn out to have been operations provocateured by the government. There is a well established history of the government using entrapment to facilitate terror plots. The New York Times reported on several “lethal terrorist plots” which were “facilitated by the F.B.I, whose undercover agents and informers posed as terrorists…” They list the use of dummy missiles, fake C-4 explosives, disarmed suicide vests, and inert chemical bombs as tools provided to naive suspects in order to fabricate these operations.

With the history of government provocateuring entrapment style fabricated terror plots, one of the many concerns with drills and exercise scenarios is that they could be used to conduit an actual attack. A terrorist could use the apparatus of the “dry-run” and make a few changes that could flip it live. For example a drill using a fake bomb could be infiltrated and made real by switching in an actual bomb. This relates to the concern with what happened in the 1993 world trade center bombing, where a government informant felt that the FBI failed to prevent a real bomb going off while a supevisor messed up the efforts to replace it with a fake one. Drills could provide cover for someone operating within the system or they could be hijacked by someone operating outside the system. In any case the government’s reflexive action is to cover-up as much as possible and portray the version of events they desire.

With a reliable eyewitness account of drills taking place and the evidence of the Boston Marathon being repeatedly used for, “dry-run disaster” exercises, the question of drills at this point is perfectly legitimate. The pictures of what look like private contractors with backpacks near the area of the explosion before it took place add to these concerns. Since the mainstream media is pretending false flag terrorism isn’t real, we have to do what we can with what we’ve got, and keep an open mind to this possibility.

Updated on April 19th The Boston bombing suspects’ mother is claiming that the FBI was in contact with her son and she believes they were “set up”. She claims in an interview with Russia Today that “they were controlling every step of him…” She says, “He was controlled by FBI for like, three, five years. They knew what my son was doing.” Their father is saying something similar. “Somebody clearly framed them. I don’t know who exactly framed them, but they did.”

Updated on April 20th to add information about the presentation titled,”Marathons- A Tale of Two Cities and the Running of a Planned Mass Casualty Event.”

We the SheepleBuying Guns With Bitcoin