Going Primal Can Revitalize You 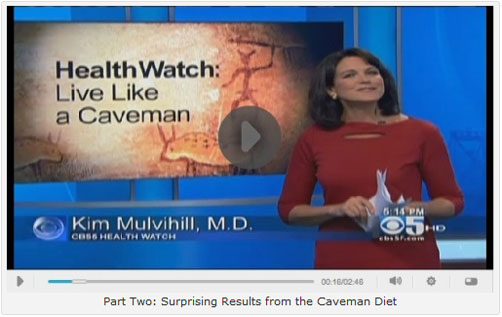 During the Paleolithic period, many thousands of years ago, people ate primarily vegetables, fruit, nuts, roots and meat – and a wide variety of it.

Today, these staples have been largely replaced with refined sugar, high fructose corn syrup, cereal, bread, potatoes and pasteurized milk products… and a much narrower selection of fruits, vegetables, roots and nuts.

While we may consider ourselves to be at the pinnacle of human development, our modern food manufacturing processes have not created a race of super-humans in possession of great health and longevity.

Humans today suffer more chronic and debilitating diseases than ever before. And there can be little doubt that our food choices play a major role in this development.

Can a Stone Age Diet Make You Healthier?

CBS recently ran an excellent series of reports about the Paleolithic diet movement. Of the mainstream press, Dr. Kim Mulvihill was the sole member present at the recent Ancestral Health Symposium in Los Angeles. She ended up taking part in Dr. Lynda Frassetto’s scientific study on the Paleo diet herself.

As reported on CBS:

“You can eat anything that would be able to be eaten without being processed,” explained Dr. Lynda Frassetto. That means no grains, no bread, and no [pasteurized] dairy but does include lots of fruits and vegetables, some nuts and oils and lots of fish, poultry and lean meats.

… Dr. Frassetto and her team at the University of California in San Francisco tested the Paleo-diet on out-of-shape volunteers. The group ate lots of food without losing any weight or exercising. “In two weeks, everybody’s blood pressure went down and everybody’s cholesterol and triglyceride levels got better. The average drop was 30 points, which was pretty amazing. It’s the type of drop you get by taking statins for six months,” said Dr. Frassetto.

Dr. Frassetto says Paleo foods, also known as the caveman diet, works by keeping your body’s chemistry in better balance.  The goal of the caveman diet is to reduce excess body fat, aid in the normalization of blood sugar levels and reduce toxins and anti-nutrients.”

“Normalizing” your system is the true strength of the so-called caveman diet. By eating foods that are concordant with your genetic ancestry, you can avoid many of the diseases associated with our modern diet. As Dr. Loren Cordain, author of The Paleo Diet and one of the world’s leading experts on Paleolithic nutrition, states:

“The nutritional qualities of modern processed foods and foods introduced during the Neolithic period are discordant with our ancient and conservative genome. This genetic discordance ultimately manifests itself as various chronic illnesses, which have been dubbed “diseases of civilization.” By severely reducing or eliminating these foods and replacing them with a more healthful cuisine, possessing nutrient qualities more in line with the foods our ancestors consumed, it is possible to improve health and reduce the risk of chronic disease.”

Why the Paleo Diet Works for Weight Loss

A common “side effect” of rebalancing your body’s chemistry is weight loss, as the two tend to go hand-in-hand. One explanation for this is that you don’t really get fat from eating too much and exercising too little.  Nor do you get fat from eating fat.

So what does cause your fat tissue to accumulate and hold on to fat?

In a word: carbohydrates.

In essence, overeating and excess weight could be viewed as a symptom of an improper diet, because when you consume too many sugars and carbs, you set off a cascade of chemical reactions in your body that makes you hungry and craving for sweets:

The resulting equation is simple: fructose and dietary carbohydrates (grains, which break down into sugar) lead to excess body fat, obesity and related health issues.  Furthermore, no amount of exercise can compensate for this damage because if you eat excessive  fructose and grains – the primary ingredients NOT found in the Paleo diet – it will activate programming to cause your body to become, and remain, fat.

As mentioned earlier, the Paleo diet can be very effective for reducing blood pressure, cholesterol and triglyceride levels – more effective, in fact, than a statin drug. According to Dr. Frassetto, people can see a 30 point drop in cholesterol in just two weeks!

That really is quite remarkable.

It is, however, also quite understandable once you realize that fructose is a major promoter of hypertension – far more so than salt. The connecting link between fructose consumption and hypertension lies in the uric acid produced. Uric acid is a byproduct of fructose metabolism, and increased uric acid levels drive up your blood pressure.

How does it do this?

Dr. Stephanie Seneff explained this in some detail in a previous interview. In summary, when you eat a diet high in fructose and other sugars, it over-taxes your liver as it cannot properly make cholesterol while simultaneously processing fructose (which it turns into fat). As a result, you end up with impaired cholesterol formation, which can eventually lead to a cholesterol- and cholesterol sulfate deficiency. At that point, your body begins to form arterial plaque to compensate for this deficiency, because your platelets can produce the cholesterol sulfate your heart and brain needs within that plaque. It’s a sort of backup mechanism to maintain proper heart- and brain function.

Unfortunately, it’s not an ideal backup mechanism because arterial plaque also increases your risk for heart and vascular disease. So truly, you’ll want to avoid forcing your body to resort to these measures in the first place, and the way you do that is by feeding it correctly… This is yet another important detail that explains how and why excessive fructose consumption is so detrimental to your health.

As you can see, simply cutting out fructose and grains from your diet effectively eliminates one of the underlying causes of a number of health problems, including:

… and that’s one of the primary reasons the Paleo and other low-carb diets work so well.

The Diet that May Beat All Others…

While you wouldn’t be able to find many of the wild varieties of plant foods eaten by cavemen even if you wanted to, you can certainly mold your diet around the principles of Paleo eating rather easily by following my nutrition plan.

I believe it to be one of the most profound interventions for the 21st century. Quite simply, we’ve strayed too far from the foods we are designed to eat, so going back to basics and refocusing your diet on fresh, whole, unprocessed, “real” food can improve just about anyone’s health. The full details are outlined in my nutrition plan, but generally speaking a “healthy diet” is qualified by the following key factors:

Going back to our roots in terms of what we eat is about 80 percent of the battle and subsequent reward in terms of improved health. But there’s a lot to be said about moving like a hunter-gatherer too. Instead of being sedentary for much of the day and then running for an hour on a treadmill, our ancient ancestors combined lots of walking with regular lifting and short bursts of high-intensity activities, and health experts agree that this may be a healthier way to live because this is what your body is “wired” for.

Previous article by Joseph Mercola: What's in Your Water?