Guess who said the following: “We have tried spending money. We are spending more than we have ever spent before and it does not work.” Was it Sarah Palin? Rush Limbaugh? Karl Rove?

Not even close. It was Henry Morgenthau, Secretary of the Treasury under Franklin D. Roosevelt and one of FDR’s closest advisers. He added, “after eight years of this Administration we have just as much unemployment as when we started. . . And an enormous debt to boot!” 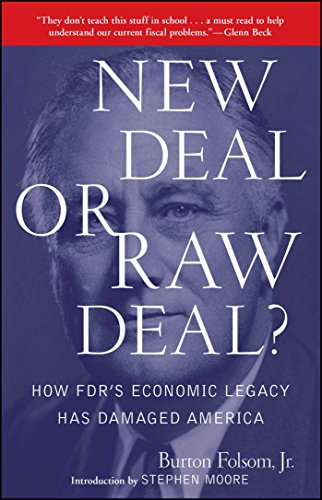 This is just one of the remarkable and eye-opening facts in a must-read book titled New Deal or Raw Deal? by Professor Burton W. Folsom, Jr., of Hillsdale College.

Ordinarily, what happened in the 1930s might be something to be left for historians to be concerned about. But the very same kinds of policies that were tried — and failed — during the 1930s are being carried out in Washington today, with the advocates of such policies often invoking FDR’s New Deal as a model.

Franklin D. Roosevelt blamed the country’s woes on the problems he inherited from his predecessor, much as Barack Obama does today. But unemployment was 20 percent in the spring of 1939, six long years after Herbert Hoover had left the White House.

Whole generations have been “educated” to believe that the Roosevelt administration is what got this country out of the Great Depression. History text books by famous scholars like Arthur M. Schlesinger, Jr., of Harvard and Henry Steele Commager of Columbia have enshrined FDR as a historic savior of this country, and lesser lights in the media and elsewhere have perpetuated the legend.

Although Professor Schlesinger admitted that he had little interest in economics, that did not stop him from making sweeping statements about what a great economic achievement the New Deal was.

Professors Commager and Morris of Columbia likewise declared: “The character of the Republican ascendancy of the twenties had been pervasively negative; the character of the New Deal was overwhelmingly positive.” Anyone unfamiliar with the history of that era might never suspect from such statements that the 1920s were a decade of unprecedented prosperity and the 1930s were a decade of the deepest and longest-lasting depression in American history. But facts have taken a back seat to rhetoric.

In more recent years, there have been both academic studies and popular books debunking some of the myths about the New Deal. Nevertheless, Professor Folsom’s book New Deal or Raw Deal? breaks new ground. Although written by an academic scholar and based on years of documented research, it is as readable as a newspaper — and a lot more informative than most.

Some of the most devastating things that were said about FDR were not said by his political enemies but by people who worked closely with him for years — Secretary of the Treasury Henry Morgenthau being just one. Morgenthau saw not only the utter failure of Roosevelt’s policies, but also the failure of Roosevelt himself, who didn’t even know enough economics to realize how little he knew. Far from pulling the country out of the Great Depression by following Keynesian policies, FDR created policies that prolonged the depression until it was more than twice as long as any other depression in American history. Moreover, Roosevelt’s ad hoc improvisations followed nothing as coherent as Keynesian economics. To the extent that FDR followed the ideas of any economist, it was an obscure economist at the University of Wisconsin, who was disdained by other economists and who was regarded with contempt by John Maynard Keynes.

President Roosevelt’s strong suit was politics, not economics. He played the political game both cleverly and ruthlessly, including using both the FBI and the Internal Revenue Service to harass and intimidate his critics and opponents.

It is not a pretty story. But we need to understand it if we want to avoid the ugly consequences of very similar policies today.

Have Another Glass of Blood Economic Recessions, Banking Reform and the Future of Capitalism