We’ve all seen the bumper stickers: “My son is in the Air Force,” “If You Can Read This in English, Thank a Marine,” “Proud Vietnam Veteran,” “Fly Navy,” and of course, “Thank a Vet.” Why should we? Why should we call them heroes, give them military discounts, grant them veterans preference, express our support for them with ribbons on our cars, honor them with a holiday, hold military appreciation church services for them, and thank them for their “service”? Veterans Day began as Armistice Day to commemorate the signing of the armistice that ended World War I. It had nothing to do with honoring current and former members of the military like Veterans Day is celebrated today. And if the sole purpose of Armistice Day was to honor World War I veterans, it should never have been celebrated since no American soldier did anything honorable by intervening in a European foreign war. And it doesn’t matter if he was drafted or not. Britain’s last World War I combat veteran, Harry Patch, died last year at the age of 111. He boasted that he hadn’t killed anyone in combat. “War isn’t worth one life,” Patch said, it is “calculated and condoned slaughter of human beings.” In his autobiography The Last Fighting Tommy, Patch wrote that “politicians who took us to war should have been given the guns and told to settle their differences themselves, instead of organising nothing better than legalised mass murder.” In the last years of his life, Patch warned some young naval recruits that they shouldn’t join. 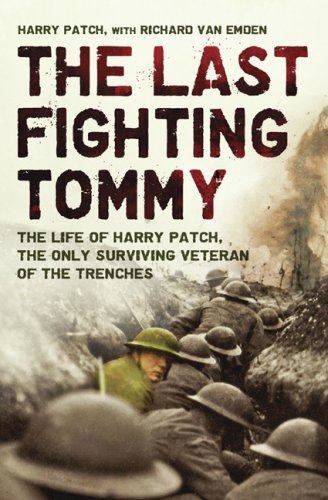 Frank Buckles, age 109, is the only American veteran of World War I still living. When asked while being honored for his service at a 2007 Veterans Day ceremony at Arlington National Cemetery what he thought about being there while the United States was at war, he replied: “I’m no authority, but I’m not in favor of war unless it’s an emergency.” I think that Buckles is more of an authority on the horrors of war and the folly and wickedness of war than the current members of the Joint Chiefs. It is only because World War I did not turn out to be the “war to end all wars” that the holiday was changed to Veterans Day as a tribute to all soldiers who fought for their country.

Although I believe World War II to be neither necessary nor good, I come not on this Veterans Day to criticize the “greatest generation,” who, it turns out, were also great at pillaging and carousing. For reasons I explained in “U.S. Presidents and Those Who Kill for Them,” World War II marks the permanent establishment of the American military as the president’s personal attack force to kill by his decree Koreans, Vietnamese, Laotians, Cambodians, Grenadians, Panamanians, Yugoslavs, Serbians, Afghans, Iraqis, Somalis, Yemenis, and Pakistanis. Next on the list is Iranians. Sometimes these presidential decrees are rubberstamped by a congressional authorization to use force, but they are always preceded by presidential lies and warmonger propaganda. So why should a Vietnam veteran be proud? He was typically young, ignorant, deceived, and drafted. He may have fought obediently, valiantly, selflessly, and fearlessly, but since he had no business fighting in Vietnam in the first place, I have nothing to thank him for. And I certainly can’t thank him for preventing the Viet Cong from turning America into a socialist republic. Besides, LBJ beat Ho Chi Minh to that anyway. Many Vietnam veterans have written me and expressed shame, remorse, anger, and resentment — not pride — for having been duped into going thousands of miles away from American soil to intervene in another country’s civil war. In fact, I have found that it is those who are not Vietnam veterans who are the most vociferous defenders of the war in Vietnam. The most undeserved and oftentimes disgusting outpouring of thankfulness I have ever seen is over those who have fought or are fighting in Iraq and Afghanistan. The praise and adoration of those fighting in “the front lines in the war on terror” reaches its apex on Veterans Day, which has become a day to defend U.S. wars and recognize all things military. These soldiers certainly have done nothing worthy of thanks. Sure, they have rebuilt infrastructure — after bombing it to smithereens. They no doubt removed a brutal dictator — and unleashed American brutality in the process. And yes, they have rescued orphan children — after blowing their parents and brothers and sisters to kingdom come. What is there to thank our soldiers for? They are not defending our freedoms. They are not keeping us safe from our enemies. They are not protecting us from terrorists. They are not guaranteeing our First Amendment rights. They are not defending U.S. borders. They are not guarding U.S. shores. They are not patrolling U.S. coasts. They are not enforcing no-fly zones over U.S. skies. They are not fighting “over there” so we don’t have to fight “over here.” They are not avenging 9/11. They are not safeguarding the American way of life. Oh, and they are not ensuring that I have the liberty to write what I do about the military.

What, then, should we thank our soldiers for? Should we thank them for fighting an unconstitutional war, an unscriptural war, an immoral war, an offensive war, an unjust war, or a senseless war? Should we thank our veterans for helping to carry out an aggressive, reckless, belligerent, and interventionist foreign policy? Should we thank the military for sucking $1 trillion out of the federal budget? But, some will say, these soldiers are just doing their jobs. They can’t help it if the U.S. military sends them to fight in an unjust war in Iraq or Afghanistan. They are just following orders. They didn’t enlist in the military to kill people. What would any sane man think about a doctor who takes a job at a hospital knowing that the hospital instructs its doctors to euthanize old and sickly patients — and then says he was just doing his job, following orders, and didn’t take the job to kill people?

Previous article by Laurence M. Vance: Pardon Me While I Yawn

Prelude to the Coming 'Bank Holiday'? TSA Resistance Taking Off