Summoned by the State

Recently by Andrew Ward: The State of Conspiracy

Well, They finally got me. For jury duty, that is.  The Court summons came in the mail, threatening force if I didn’t show my face at the court house on the declared date.  And this letter was not a request: it was an ugly, mandatory government wrench in my regularly scheduled programming.  Not being the confrontational type I eventually filled out their outdated form, and began frantically researching one thing, and one thing alone: how does one escape jury duty?

I talked to friends and family, did some surfing online, and finally found my escape hatch: premature nullification invocation.  You see, judges and prosecutors cannot stand the fact that a juror has the right to vote “not guilty” if he believes their law is unjust.  Statists loathe the power of the people to judge their sacred Law and make no effort to promote such a contemptible concept in the official juror’s pamphlets.  Consequently, if you bring up Jury Nullification early, the judge will more than likely excuse you from the building.  After all, they’re looking to convict.

So the day finally came.  I put on my Monday’s best, took the subway to the court house, and sat inside the cold orientation room with about sixty of my fellow law-abiding citizens.  The “honorable” judge entered, we were told to rise for Him, and he informed us that we did not have the right to discuss the case with anyone outside of the court.  At this point I’m thinking, “Great.  I’m surrounded by a bunch of lemmings who worship this stupid charade; I’ve got to get out of here!”  Eventually, forty names were randomly called, and much to my chagrin, I was one of them.

After entering the court room another clerk ritualistically called out twenty four names to approach the front.  Once again, I was one of the names called. Now I’m getting worried.  I really don’t want to be a part of this.  Eventually we stood, raised our hands, and took an oath to swear by something or someone; maybe it was Obama.  But I’m pretty sure it wasn’t God. I don’t think they allow God in a court room anymore; just “admissible” evidence.

The judge then gave us the shocking case details: the thirty year-old male defendant is accused of having sexual relations with a fourteen year-old girl.  At that moment the entire courtroom looked at the defendant: a poor, solemn, Spanish-speaking man sitting by his lawyer and translator, both of whom were probably explaining that he had no chance in hell of being found innocent. We then turned our eyes to the alleged victim’s family that was eagerly waiting to see if their tax dollars would be spent imprisoning this man. The judge then gave the go-ahead for the tough prosecutor to begin fishing out all trouble-making jurists.

Here the prosecutor proceeded to paint an ugly picture of the defendant by first questioning the jury. “Does the fact that an abortion took place offend you? Does the subject matter bother you? Are you offended that we recorded their phone conversations?” At this point I am blankly staring, unsure of how to react, or what to do. Then the prosecutor got me on this one: “Can you put aside the fact that the relationship was consensual to deliver a proper verdict?” I promptly raised my hand to ask to approach the bench, where the defense, prosecution, and the tape-recording transcriber awaited to hear what on earth I had to say. 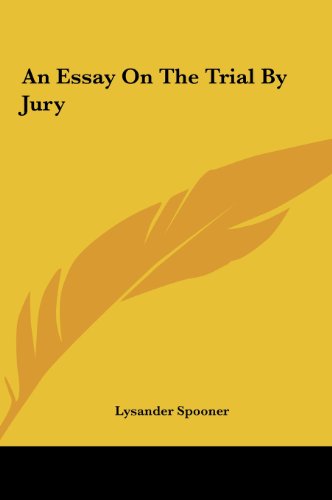 I told them that the case did not bother me because there was no force involved, and that there were young girls mature enough to make a conscious decision about sex.  I then asked if the court recognized the right of a juror to nullify a law that he or she didn’t agree with. Obviously, the honorable judge replied, “No!” After a pause he glaringly asked, “You think it’s okay?!”  In response I explained that while I do not endorse the action, it was consensual, so I see no problem with it.  He turned to the lawyers and asked if there was any reason why I should not be excused.  The prosecutor held her head down and said, "No." The hopeless defense, attempting not to displease the judge, also agreed, and I hurriedly walked out of hell and into the “free” world.

It was an absolutely beautiful day outside.  I enjoyed the warm weather with my windows rolled down and blasted my happy music with glee, for I was no longer hassled by the inconvenience of my so-called duty.  I was a free man, unlike that poor defendant.  I was also a philosophic hero, for I stood up to a judge and prosecution by telling them what I thought of their Almighty Law.  And while most were impressed by my conviction, a critical question came my way with no immediate answer: “So… you didn't get to nullify any laws?” I began to wonder: did I do the wrong thing by exposing my beliefs so soon?  Maybe I should have played along, kept my mouth shut, and stay on the jury to give that man a chance? Talking to those closest to me, they claimed it was a no-win situation and that I shouldn’t beat myself up over it. But their words offered no comfort. The “justice” system had played on my selfishness and disgust of the discordant process to expunge the only non-drone in the room.

In torment I was kept awake with the realization that I should have stayed to fight for the defendant.  Sure, I was there against my will.  Sure, liars made me swear to tell the truth and the defendant was just a “depraved” stranger. Sure, I would have upset the law-abiding jury. And sure, a mistrial would only delay a guilty verdict a few days. No matter what, the defendant was doomed to be eaten alive by the jaws of law, and I did not even have the gumption to throw the dead man a life preserver.  Who knows, maybe I could have stopped it; at least bought him a few days of hope, if anything at all.

As I sank by the weight of my blunder, an angel in my life reminded me that the power of our movement was in telling the truth, and that lying to do the “right thing” cannot be necessarily good; furthermore, using inappropriate means to justify an end is the State’s modus operandi.  I like to think she’s right.  As a free people, we are continuously put in unethical situations by those People who never ask themselves — among other things — “Who am I, or anyone else, to deliver my government-ordained judgment on another because I don’t agree with their culture and personal choices?”  After all, there could possibly be only one such Judge, and a sizable number of people don’t believe in such a powerful concept anyway.  Perhaps it is for this reason that we are awash in so many ambiguous and helpless conditions?

Honestly, I don’t know what I would do if ever resummoned by His Majesty’s Court. At the moment I’m leaning toward tossing their orders in the government-provided recycling bin. Maybe you should too.

The Best of Andrew Ward

Andrew Ward [send him mail] is an activist who works and lives in California.

Previous article by Andrew Ward: The State of Conspiracy

Why I Got Fired From Teaching American History The DIY Gym: 8 Pieces of Equipment That Will Get You Strong & Save You Money