Glenn Beck is a polarizing person among libertarians. Some laud him for being one of the few voices on television to criticize both Democrats and Republicans as being equally complicit in growing the size of government and pointing out that there is no significant difference between them. Others view him as a phony usurper of the freedom movement.

This raises even more interesting questions than just about Beck himself: what makes a person a phony? At what point can a person with formerly statist views be considered to have had an authentic change of heart?

The funny thing is that those who think he is a true libertarian tend to watch him; those that think he is a fake do not. I was one of those who did not, and it caused a lot of debate with those who did. Why not watch him? He is interesting, he raises good questions, and so on.

I finally watched him last night as he discussed the book Nudge by Richard Thaler and Cass Sunstein. Thaler was my dissertation advisor a few years ago when I received my Ph.D. in Finance from the University of Chicago. I read an early version of their book. I even provided an extra Simpsons reference for them. I am mentioned in the acknowledgments. I have read every single post on the Nudge blog, sent them useful links, and commented on items. In short, I am intimately familiar with the themes and the content of Nudge.

Watching Beck, I discovered the truth about him: neither those who claim him as a libertarian nor those that denounce him as a phony are right. Beck is not a libertarian; he is a deep-seated socialist. But he is also not a phony; it is so deep-seated in him that he doesn’t even realize it.

I had three problems with Beck’s show. The first is that he provides the right conclusions but he gets there with the wrong arguments. This is extraordinarily frustrating to watch. Suppose you like a girl, or a boy. Or you find a particular religious text magnificent. Then imagine how you would feel hearing someone praise your girl or boy, or your religious text, but for all the wrong reasons. You want to simultaneously object and agree. Yes, the object of your heart is wonderful, but not at all in that way. "Thumbelina is beautiful. She is so tall!" Huh? 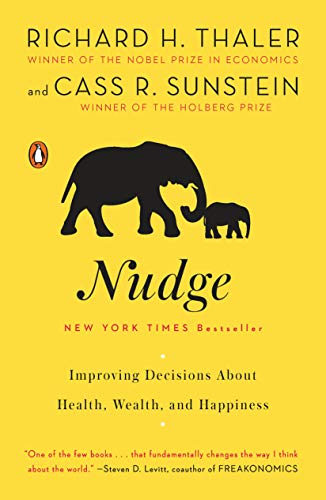 Beck’s main message is that if governments nudge people to do the right thing by changing their default options, then that will eventually lead to riots and the collapse of society. I do agree that government nudges are a bad idea. But Beck’s argument is essentially a slippery slope argument. And there are two big problems with slippery slope arguments.

First, regardless of disclaimers to the contrary, they implicitly assume that the current proposal in and of itself is harmless — for example, replacing the default choice of unhealthy fries with healthier carrots in, say, a kid’s meal. That’s giving up on the fight. Perhaps there is some truth to the slippery slope, that indeed in a world where we accept government regulations of defaults we will become more acquiescent of further government interventions. But that will never win you any converts. "We’ll just deal with it later," people will think. Or they will suggest we just vote on the current proposal and when the really bad stuff comes, we can revisit it then. A slippery slope is a vacuous counterargument because it leaves the person you are trying to sway simply feeling that this current proposal, whatever it is, is not so bad by itself.

Second, a slippery slope argument does not bind the person arguing. In other words, Beck leaves himself wiggle room to later change his mind completely and support nudge-like policies. How? He can just say, "A-ha! I have discovered a way to block the slippery slope. We just need to also do X, and that’s it." Then with some magic, the fries lead not to riots, but to world peace. There is no intellectual commitment with a slippery slope argument.

My second problem with Beck was his exaggerations and misstatements of major issues. If all I had known of Nudge had been from watching his show, and then I was to debate Thaler or Sunstein, they would destroy me. Numerous times Beck claimed that nudges remove or restrict options. Thaler would quite clearly argue that this is not so, and he would win that argument hands down. Most nudge policies are simply about changing defaults, such as the default 401k plan you invest in, or the default health plan you choose. You can always choose whatever you would have otherwise chosen, if you so wish. But those who don’t care or don’t know would be opted into a better plan, not as viewed by Thaler or even Beck, but as viewed by people just like them, or in some cases, even by themselves.

There are ways to argue against nudging people through government force. But slippery slopes and false statements are not good ones.

How would I argue against nudge? First, I would point out that it is wonderful and completely unarguable when it comes to private companies or households. It probably is a great idea to hide the fatty foods in your kitchen and make the healthier ones more easily available. You will probably snack a little better. If you run a company providing pensions to your employees, why not default them into what you and other employees clearly view to be the best alternative, rather than just bonds or just stocks? Whoever disagrees can easily change it, but whoever didn’t think about it wouldn’t regret it much later. Perhaps you disagree with an example here or there, but at heart Nudge provides a set of useful tools to help people without being abrasive. In a private, free market setting, that is hard to argue against. It is hard not to cheer for it.

Second, I would point out that when it comes to government nudges, it is not the same thing. Government nudges are wrong. I have had this debate with Thaler and we disagree. He thinks libertarians are irrelevant because we don’t address practical questions. I think governments that implement nudges in areas they are not supposed to intervene are continuing their unconstitutional activities. Should the default military armor for soldiers who can choose otherwise be X or Y when we are fighting an unconstitutional war of aggression? I don’t think it is being irrelevant to say that that question is silly, and that the bigger question of non-interventionism ought to be addressed.

But Beck does not make a single case against immoral government behavior. In fact, he agrees with the principle. And this is the third, and biggest, problem that I have with him.

He started and ended his show with the same scenario, saying that America is facing a choice, a choice between socialism and freedom. And that while there are some that support socialism, there are more of us who support freedom, and books like Nudge are implicitly supporting socialism without actually saying so, and therefore depriving the American people of the debate. Let’s just have it out in the open, he says, and let the people decide.

And that’s where he is most wrong. Some things are absolutely not up to the people to decide. If a majority voted to execute an innocent person without due process, that is wrong. If they voted for genocide, that is wrong. Morality and majority vote are not the same thing.

But Beck thinks they are. And that’s where he reveals his statism and his socialism. Majority vote is the very basis of socialism. But true libertarians know that even 95 percent of a county can be wrong. And the important fight is to win the war in the hearts and minds of people with truth and actual engagement of the details, not sweeping things under the rug, arguing about slippery slopes, or playing clips of a handful of people.

Beck does not realize he is a socialist. It is an unstated assumption of his that of course we should leave it up to the people.

We’ve tried that, Glenn. When people can vote themselves your property, they will.

The fundamental tenet of socialism is that whatever the people say is right.

The fundamental tenet of libertarianism is that the initiation of force is wrong.

By explicitly and continually arguing that we need to all make a decision together, Beck has shown himself to be a socialist at heart. It is almost as if he is saying, "Look, I would prefer freedom, but if the people vote for socialism, then that’s okay."

Glenn, it is not okay.

The Best of Philip Maymin

Previous article by Philip Maymin: Your Privacy Is Worthless