The most powerful patron of radical Islam is not Iran, Iraq, or Saudi Arabia. It is the government headquartered in Washington, D.C., which for more than a half-century has diligently cultivated Islamic terrorism. Yet millions of Americans are suffering what amounts to a collective loss of bladder control over the purported threat embodied in the proposed Cordoba House — the Islamic equivalent of a YMCA — in New York City.

Allowing the “Ground Zero Mosque” to be built, insists Newt Gingrich, would be tantamount to “surrender” in a struggle against those implacably committed to our destruction. New York gubernatorial hopeful Carl Paladino, a New York crony capitalist who anointed himself a paladin of the Tea Party movement, has made opposition to the “Ground Zero Mosque” the central plank of his campaign. Paladino, who has profited handsomely from government’s redistribution of wealth, promises that if elected he will confiscate the property used for the Muslim Community Center through eminent domain and use the land to erect a war memorial.

Writing in National Review, former federal prosecutor Andrew McCarthy insists that Imam Feisal Abdul Rauf — the Kuwait-born U.S. citizen who leads the Cordoba Initiative — is pursuing a “stealth jihad” as a fellow-traveler of the Muslim Brotherhood. “The Ground Zero project is a test of America’s resolve to face down a civilizational jihad that that aims, in the words of its leaders, to destroy us from within,” maintains McCarthy.

According to Bryan Fischer of the American Family Association (AFA) the problem isn’t the proposal to build a Muslim cultural center two blocks from Ground Zero. Rather, it’s the fact that the government ruling us permits the existence of mosques anywhere in the United States.

Rather than focusing exclusively on the so-called Ground Zero Mosque, the AFA and like-minded organizations have instigated a nation-wide campaign to protest construction of Muslim houses of worship in more than a half-dozen states. Like McCarthy, Fischer treats Imam Rauf as an asset of the Muslim Brotherhood, which (according to Fischer) is “at the heart and center… the soul of Islam in America.”

Here’s a quick digest of the charges leveled by Fischer, which are typical of this manufactured controversy:

Islamic houses of worship serve as recruiting centers for soldiers of jihad, who will kill and die on behalf of Sharia Law. Many Islamic clerics, including Imam Feisal, are joined at the hip with the Muslim Brotherhood — the most powerful element of the international Islamic terrorist network.

Stipulating that those concerns are genuine, and that the proper course of action would be to target the greatest offenders first, the campaign to shut down the global jihad should target the United States Government — and the Republican-dominated Evangelical Churches that serve as military recruiting stations for the Regime in Washington. 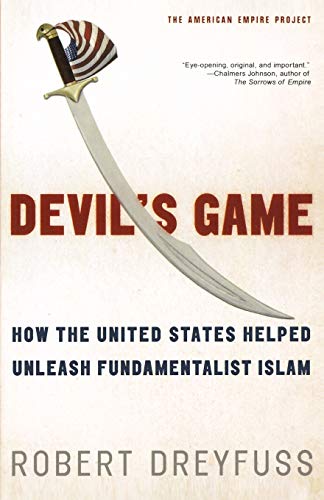 During the past decade, a Middle Eastern nation of roughly 30,000,000 people once ruled by a secular government succumbed to Sharia Law. The predictable results of that catastrophe included a dramatic increase in religious violence, such as the persecution of professional women whose dress and conduct are now seen as unacceptable. More than half of the Christian population of that country — which includes congregations tracing their roots back to the original disciples — was driven into exile.

That nation is Iraq, which suffered for decades under Washington’s loathsome subcontractor Saddam Hussein before Saddam’s employer decided to remove the middleman.

For a dozen years after the 1991 Gulf War — which followed the Washington-instigated Iraqi assault on Kuwait, which itself was a sequel to the Washington-abetted Iraqi war with Iran — the country was suffocated by a murderous embargo punctuated with the occasional terror-bombing. After being softened up for more than a decade, Iraq was invaded and occupied by U.S. troops who killed and died in order to install an Islamist government whose new constitution formally enshrines Sharia Law.

When American jingoists offer misty-eyed tributes to the soldiers who died in the course of “liberating” Iraq, it could be said that they are, in effect, praising the efforts of men and women who are martyrs to the cause of Sharia Law.

This outcome is not an historical anomaly. For the past six decades, the Anglo-American elite (with Washington assuming the senior partner role after World War II) has assiduously promoted the most violent strains of revolutionary Islam, often — but not exclusively — as a strategic weapon in the context of the Cold War.

The Muslim Brotherhood — which grew out of the late-19th Century agitation of Persian-born professional revolutionary Jamal Eddine al-Afghani — has long been one of the Anglo-American elite’s most important strategic assets, as well as the talent pool that was used to staff the deadliest terrorist network in the Muslim world.

While he was superficially the most devout and pious of Muslim believers, Al-Afghani, writes Robert Dreyfuss in his valuable book The Devil’s Game, “a heterodox thinker who was a Freemason, a mystic, a political operative, and above all … someone who believed in the ‘social utility of religion.'”

After serving as a Russian agent in the 1860s, Afghani defected to the British. He was in London’s employ when he made a disciple of an Egyptian Sugist named Mohammed Abduh.

During the 1870s, Afghani and Abduh used Cairo’s storied Al-Azhar mosque as a recruiting center for a revolutionary network, which gathered cadres from throughout the Middle East and Europe. Afghani also founded a lodge of his Arab Masonic society, which became the headquarters of what Egyptian police called “young Thugs” — a description invoking India’s notorious Thugee Cult, an oath-bound fraternity of murderers.

When Afghani was eventually expelled from Egypt, his disciple Abduh remained, eventually rising to become the nation’s Mufti (supreme interpreter of Islamic law) in 1899. Like his mentor, Abduh considered revolution to be his religion, and the Islamic faith to be a vessel for his political ambitions. Among those who fell under Abduh’s influence was Hassan Al-Banna, the schoolteacher who gave tangible form to Abduh’s revolutionary designs by founding the Ikhwan al-Mulimeen (Islamic Brotherhood) in 1928.

Reflecting the influence of Afghani and Abduh, Banna organized the Brotherhood into cells (called “families”) of five to seven members.

The Brotherhood “was more than a movement,” writes Dreyfuss. “It was a cult, it was a revivalist party, it was an intelligence operation, it was a paramilitary unit, and it was an international organization that was rapidly building branches in many Middle Eastern countries.” During World War II, Dreyfuss continues, Brotherhood cadres were recruited by British, Nazi, and Soviet intelligence agencies.

“In the eastern regions of the Soviet empire, where the Nazis were more interested in oil than ethnic cleansing, the Third Reich mobilized Muslims and other ethnic minorities to fight for the liberation of their homelands,” writes Eliza Griswold in The New Republic, summarizing the findings in Ian Johnson’s recent book A Mosque in Munich. “The Nazis plucked Muslims from German prisoner-of-war camps; some Muslims became German soldiers, members of the SS; some, professional propagandists…. Once World War II ended, many of these men, stuck in Germany and having lost their homelands, found a new employer: the United States.”