The Art of the Steal

A moving story of the greatest theft of private property by the state and its powerful allies in the civic and charitable community.

It is my dream to create an art which is filled with balance, purity and calmness, freed from a subject matter that is disconcerting or too attention-seeking. In my paintings, I wish to create a spiritual remedy, similar to a comfortable armchair which provides rest from physical expectation for the spiritually working, the businessman as well as the artist. ~ Henri Matisse

The dream of the artist Henri Matisse was embodied in the art collection of Dr. Albert C. Barnes and the Barnes Foundation. The Barnes Foundation (founded in 1922) located in Merion Pennsylvania about 5 miles outside Philadelphia is home (and I literally mean home) to some of the greatest art treasures in the modern world, Matisse, Renoir, Cézzane, Picaso, van Gogh, Monet to name just a few. It is estimated to be worth $25–$35 billion and considered the world's greatest collection of Impressionist, Post-Impressionist and Early Modern art. The collection includes such great works as The Portrait of the Postman Joseph Roulin (van Gogh), The Card Players (Cézanne) and The Joy of Life (Matisse). Dr. Barnes was one of the few collectors that viewed African Art not as primitive cultural artifacts but as works of art equal to the great works of Europe. To think of Dr. Barnes as simply an art lover or collector does not do him justice. Dr. Barnes understood what Matisse was searching for in his dreams – balance, purity, calmness, a spiritual remedy for businessman as well as the artist. Dr. Barnes built his Foundation and displayed his art (and it was his art) in his house organized not by artist or subject but by the aesthetic and spiritual connection between the pieces. A van Gogh is hung next to a door lock, a piece of furniture or an African sculpture. The rooms are comfortable so one can pause for any length and contemplate the great works. The site is adorned with beautiful gardens and located in a serene neighborhood in Lower Merion, PA. Unfortunately, in 2012 it will all be gone. The Art Of The Steal is a riveting movie that shows how the state and its powerful allies in the art and charitable establishment trample the private property rights of the individual who in the words of the great artist Matisse created "the only sane place to see art in America." 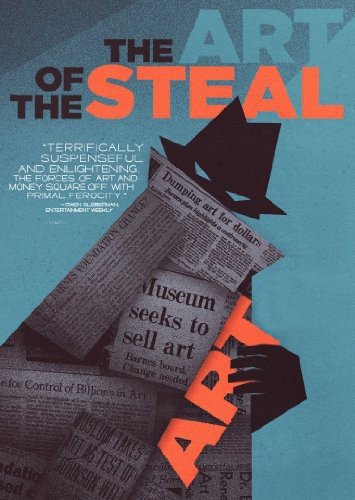 Dr. Barnes himself is a classic example of the power of free markets. He was born into poverty and grew up in the low income neighborhoods around Philadelphia. He financed his college education by boxing professionally. He became a chemist and physician, invented and patented Argyrol, a substitute for Silver Nitrate, which, at the time was put in the eyes of every baby born in the USA to prevent venereal disease (an unintended consequence of war). He made his fortune in pharmaceuticals and used his fortune to gather the world's greatest collection of early and post-modern art. In 1923 he displayed seventy-five paintings including works of Soutine, Picasso, Chirico, and Matisse at the Philadelphia Academy of the Fine Arts. The art and Dr. Barnes were excoriated by the Philadelphia art establishment, mainly the powerful Philadelphia Inquirer owned by Moses Annenberg (the father of Walter Annenberg who later in life established the "The Annenberg Foundation" one of the key players in the state confiscation of Dr. Barnes private property). His experience left him bitter and hostile towards the Philadelphia art establishment and the Philadelphia Inquirer. Another event had a great influence on Dr. Barnes decision to move the art out of Philadelphia. John G Johnson, an attorney to some of the most powerful men in the world including J.P. Morgan and Andrew Carnegie was the owner of a substantial art collection himself. He died on April 14, 1917 and donated his collection to the citizens of Philadelphia but directed that the art be preserved in his home on S. Broadstreet in Philadelphia. A few years later The Philadelphia Museum of Art opened a new neo-classical wing and needed art to fill it. By 1933 the museum came up with an "extraordinary reason" to move the collection. In 1921 the city of Philadelphia convinced the Orphan's Court (with the full backing of the Philadelphia Inquirer) that the paintings were threatened because Johnson's home was not fireproof. The home was condemned and the art moved to the museum under the stipulation the museum honor the remaining provisions of the will to keep the collection together (in 1989 the museum convinced the court to allow them to break up the collection for a "more unified presentation"). Barnes witnessed this in 1933 and vowed they (the Philadelphia art establishment, socialites and politicians of Philadelphia) would never get a hold of his collection – unfortunately Dr. Barnes underestimated the power of the state. Dr. Barnes was killed in 1951 in a car crash (was it an accident?). This left the Barnes Foundation in the hands of Violette de Mazia who was Director of Education. During her life the Barnes Foundation stayed true to Dr. Barnes’s Will and Testament, it stayed in Merion and was used primarily to educate. The public could view the collection but only during limited hours. Unfortunately, Barnes had no children so when Mrs. de Mazia died the Barnes Trust was put in the hands of Lincoln University a small, private all black college located in Pennsylvania and placed under the control of a 5-member board (as per Dr. Barnes will). Later Lincoln University became a state school that was chronically under funded. Yet, under the direction of Franklin Williams (the Lincoln Trustee), and an outside advisory board of art experts, the conditions of the Barnes Trust were honored. Around 1990 Williams died of cancer. Now the question becomes who appoints board members (or as Lenin put it "who whom"). This is when the wheels were set in motion by powerful forces in Philadelphia, the art establishment and the state of Pennsylvania to steal the collection from the Barnes Foundation "for the public good" and move it out of Merion to Philadelphia. At this point the movie plays out like a great Hollywood crime mystery with state institutions and individual politicians playing the villains. The movie chronicles in great detail the chain of events that led to a complete and utter disregard for private property rights. I am no Constitutional lawyer, but this may be the most extreme and egregious case in American history of state violation of private property rights.

The movie was directed and produced by Don Argott and Sheena Joyce. It was funded by Lenny Feinberg (a student of The Barnes Foundation and wealthy real estate investor). Mr Feinberg said he "stewed" when he heard the foundation’s collection was being moved to Philadelphia which explicitly goes against Dr. Barnes 1951 will, which stated that "the foundation shall always be an educational institute, and the paintings shall never be removed, sold or loaned." Supporters formed "The Friends of the Barnes Foundation" in late 2004 after the ruling of the Montgomery County Orphan's Court granting permission for – but not mandating – the Board of Trustees of the Barnes Foundation to move the institution's art collection to the city of Philadelphia. One of the supporters, Nick Tinari (A Barnes attorney) is interviewed between shouts of "Philistines" and "have fun now – wait until it's your will" at people attending a museum event celebrating the move of the Barnes collection to Philadelphia. My only criticism of the movie is that it does not verbally make a stronger use of the constitutional argument for private property rights and often comes off as critical of capitalism when it shouldn’t. After all, it was capitalism that provided the wealth Dr. Barnes used to purchase these great art pieces. But, this is a minor criticism. The story itself is a powerful reminder of the corruption of the state. From the abuse of civil rights laws (the powerful interests sued the neighbors of the Barnes Foundation using the Federal Ku Klux Klan Act), the unholy alliance between the state and powerful "public charitable" trusts headed by the Pew Foundation, power seeking individuals and corrupt politicians (including the "dishonorable" Governor Edward G. Rendell who does his pathetic best to defend the state). This is a story that every freedom loving Libertarian needs to know. There are so many lessons to be learned from this event that a short review simply cannot do justice to it. The movie is well done and the story is riveting. I can think of no better vehicle for teaching why the framers of the Constitution were so adamant that a free and just society respects private property rights and coercive tyrants don’t. The dream of Matisse was realized in the art collected by a private individual and destroyed by the nightmare of state abuse.