That Reckless Protection Racket of Military Socialism and Fascism

In previous articles, I have referred to military socialism while others have referred to the military industrial complex, and some of these descriptions need to be clarified for a better understanding of the dysfunctional nature of the U.S. government's national security monopoly, and an alternative must be presented.

The Washington Post recently published a series of articles with the title, Top Secret America, regarding how out of control our federal government's national security Leviathan has become, and how much the centralized bureaucratic Leviathan depends on private contractors. The series by investigative reporters Dana Priest and William Arkin was in three parts (Part 1, Part 2, and Part3). In the same week, the whistleblower website WikiLeaks released a massive number of documents revealing much of what has already been known about the U.S. government's failing war in Afghanistan. According to Priest and Arkin of the Post:

As the Washington Post series notes, "Private firms have become so thoroughly entwined with the government’s most sensitive activities that without them important military and intelligence missions would have to cease or would be jeopardized." The Post provides a list of the private contractors.

In response to the Post series, economist Robert Higgs noted:

The whole business is akin to sending a blind person to find a needle inside a maze buried somewhere in a hillside. That the massive effort is utterly uncoordinated and scarcely able to communicate one part's "findings" to another only strengthens the conclusion that the goal is not stopping terrorism, but getting the taxpayers' money and putting it into privileged pockets….

It's a rip-off, plain and simple…

Now, socialism can be described as public ownership of property and wealth, and redistribution of wealth, administered by the State. And fascism is State control of private property and industry, and also includes an enmeshment between private businesses and the State. Under either socialism or fascism, the tasks of territorial protection have been monopolized by the State, whereas in an actual capitalist system, which America has never actually experienced, the tasks of territorial protection would be performed by competing agencies and would not be restricted or interfered with by the State.

In the latter, the people are oppressed, because they are taxed, conscripted, and regimented, but they are not co-opted and corrupted by joining forces with their rapacious rulers; a clear line separates them from the predators on the “dark side.”

With military-economic fascism, however, the line becomes blurred, and a substantial number of people actively hop back and forth across it: advisory committees, such as the Defense Science Board and the Defense Policy Board and university administrators meet regularly with Pentagon officials… and the revolving door spins furiously — according to a September 2002 report, “[t]hirty-two major Bush appointees are former executives, consultants, or major shareholders of top weapons contractors”…and a much greater number cross the line at lower levels.

Moreover, military-economic fascism, by empowering and enriching wealthy, intelligent, and influential members of the public, removes them from the ranks of potential opponents and resisters of the state and thereby helps to perpetuate the state’s existence and its intrinsic class exploitation of people outside the state. Thus, military-economic fascism simultaneously strengthens the state and weakens civil society, even as it creates the illusion of a vibrant private sector patriotically engaged in supplying goods and services to the heroic military establishment (the Boeing Company’s slickly produced television ads, among others, splendidly illustrate this propagandistically encouraged illusion).

Whether it is military socialism or military fascism, or whether these private contractors are pathologically enmeshed with the U.S. government, it is made possible by forced redistribution of wealth, pure and simple, and it is not a productive service of security.

Another aspect of the State's monopoly of territorial protection is "military Keynesianism," as Prof. Higgs has also discussed. Keynesian economists and policy makers believe in deficit spending as a means of stimulating the economy. Keynesians love war and Big Military Socialism/Fascism. George W. Bush's starting two wars sure stimulated the economies of many private defense contractors and government employees. Barack Obama's policies are Keynesianism on steroids.

Those kinds of policies are named after John Maynard Keynes, whose economic ideas of short-sightedness ("In the long run, we're all dead…") and irresponsibility, and selfish disregard for the welfare of future generations, is what got all the world's economies in the mess we're currently in.

The underlying condition that has caused the corruption, ineptness and the State's ever-expanding collusions with private businesses is the U.S. government's monopoly in territorial protection, in which the State monopolist has no competitive incentive to actually provide quality of protection services.

Because of being institutionalized monopolists, the bureaucrats in Washington could not recognize or would not acknowledge the terrorists' actual motivation for their terrorism, as expressed by the terrorists themselves, that motivation being the U.S. government's intrusions into Middle-Eastern territories for at least six decades.

But typical of government bureaucrats and monopolists of the protection racket they control, the answer to the problem of the terrorism that was motivated by U.S. government's intrusions was to commit more intrusions in the Middle East. 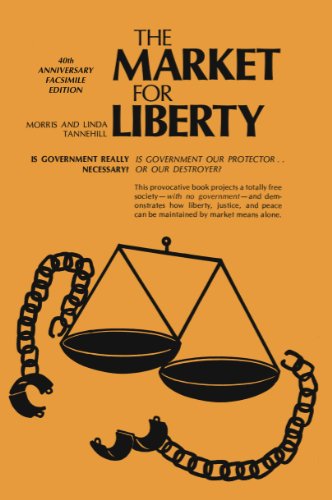 Only a monopolist of territorial protection would do the stupid things that the socialist/fascist U.S. government officials have been doing for these past many decades. The alternative to such counter-productive policies and redistribution parasitism is to outlaw the State's protection racket and legalize competitive protection agencies. It is not as far-fetched as it may sound. In their book, The Market for Liberty, ch.13, authors Morris and Linda Tannehill note,

Those who doubt that “the private sector” of the economy could sustain the expense of a free enterprise defense system would do well to consider two facts. First, “the public sector” gets its money from the same source as does “the private sector” — the wealth produced by individuals. The difference is that “the public sector” takes this wealth by force (which is legal robbery) — but it does not thereby have access to a larger pool of resources. On the contrary, by draining the economy by taxation and hobbling it with restrictions, the government actually diminishes the total supply of available resources.

Second, government, because of what it is, makes defense far more expensive than it ought to be. The gross inefficiency and waste common to a coercive monopoly, which gathers its revenues by force and fears no competition, skyrocket costs. Furthermore, the insatiable desire of politicians and bureaucrats to exercise power in every remote corner of the world multiplies expensive armies, whose main effect is to commit aggressions and provoke wars. The question is not whether “the private sector” can afford the cost of defending individuals but how much longer individuals can afford the fearsome and dangerous cost of coerced governmental “defense” (which is, in reality, defense of the government, for the government…by the citizens).

In fact, it is inevitable that the protection racket monopolist will provoke hostilities as a means of expanding the monopolist's own power, made possible by the monopoly's compulsory nature on the territory's inhabitants.

After the federal monopolists of protection have been destroying Iraq for 20 years, and Afghanistan for 8 years, and Pakistan now, as well as impoverishing America and burning our Liberty to the ground, Iran is next, and for no good reason.

We will soon see if Americans really are masochistic gluttons for punishment and whether they will support yet another unnecessary campaign of wanton aggression, this time against Iran and based on the same emotionalistic propaganda that sucked America into Afghanistan and Iraq, and if Americans will support even more U.S. government murder of innocent human beings and destruction of foreign territories. Remember the old saying: "Fool me once, shame on you; fool me twice, shame on me." (Or 3 or 4 times now. Or is it 6 or 7 — I've lost count.)

Not only have the Anti-Federalists been proven right about the dangers of a centralized national State, but, given how ineffective and counter-productive a socialist and fascist State monopoly of territorial protection has been, as the Washington Post series and the WikiLeaks disclosures have shown, we now have good reason to decentralize America and cut the chains of serfdom, dependence and government-institutionalized impoverishment.