Will Africa's Leaders Call for an End to Foreign Aid?

In 2008, I campaigned for a presidential candidate who opposed U.S. taxpayer-funded foreign aid programs. In response to my choice of candidate, a Peace Corps Niger alumna, a good friend, asked skeptically "Well, what does he have to say about Africa?" To which I could only reply, with some contempt, "What could any U.S. President possibly have to say to any African about sustainable living? There've been people living on that continent since history began."

We've grown so accustomed to the belief in American exceptionalism and are so enamored with the perceived omnipotence of our democratically elected leaders that we've bought into the belief that the American President with the full force of the U.S. Government behind him is capable of solving each one of the world's problems. Never mind whether or not the American President should be involved in the internal affairs of African countries, that's beside the point. What we've come to believe is that he or she actually can solve Africa's problems. It's simply a matter of whether or not he decides to dedicate his resources to such an effort.

Dambisa Moyo – whose credentials read: Goldman, World Bank, Oxford Ph.D. in Economics, Harvard Masters from the Kennedy School of Government, born to and raised by African parents in Lusaka, Zambia – has a skeptical view of foreign aid. In her book Dead Aid: Why Aid Is Not Working and How There Is Another Way for Africa, Moyo pleads with Western voters to put an end to the disastrous cycle of foreign aid in which Africa is stuck.

Aid has helped make the poor poorer, has made growth slower, has caused life expectancy to stagnate (in some cases regressing back to 1950's levels), has hurt literacy rates, and has created an atmosphere of dependency at all levels of society Moyo argues. As a way to illustrate the failure of such a heavy reliance on foreign aid, she points out "Just 30 years ago Malawi, Burundi, Burkina Faso were economically ahead of China on a per capita income basis."

What is it that makes Africa such a broken place, while the rest of the developing world is so full of success stories? It's the foreign aid, Moyo writes. Take Africa off the foreign welfare, and watch her flourish. No more grants, no more low-interest World Bank loans, and definitely no more free mosquito nets. Just let Africa prove herself. To back up her theory, Moyo shows the Western reader the benefits that China has brought to the continent with its dollars aimed at investment. The West wants to bring aid to soothe its guilty post-colonial feelings. "Morality – Western, liberal, guilt-tripped morality – seeped into the development equation," writes Moyo. Some of the Western aid even comes with judgmental strings attached and a plethora of administrative hoops to jump through. China, conversely, comes with clear intentions – make money, extract the oil and minerals, generate trade partners, and build goodwill that will last through the 21st century. Sixty years of Western help and some $1 trillion of foreign aid has achieved little in Africa. Throwing more money at the same problems with the same solutions in place is not likely to achieve a different end. Moyo proposes solutions with high praise for the Chinese, who she quite clearly points out, are in Africa purely for their own good. 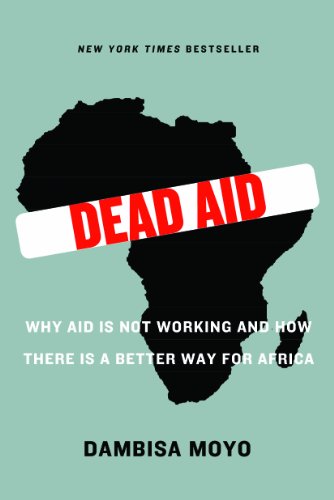 In the 154-page (excluding notes) book, which at times serves as a primer on foreign aid, Moyo starts us off post–World War II, with the dreaded Bretton Woods system of international monetary order. John Maynard Keynes and Harry Dexter White (US Secretary of State) lead the discussions on the founding of the International Monetary Fund (IMF), the International Bank for Reconstruction and Development (the World Bank), and the International Trade Organization (which never received U.S. Congressional approval and was de facto replaced by GATT, until WTO was adopted).

Moyo takes us through the implementation of the Marshall Plan, in post-WWII Europe, and tells us how its mechanisms were rolled over for use in implementing foreign aid in Africa. Originally, the specific purpose of these organizations was reconstruction, not development, writes Moyo. But the World Bank and IMF would eventually become central actors in the area development. Like many other government programs, once the World Bank and IMF were created, they didn't just disappear after their stated mission was accomplished. The IMF and World Bank took on new missions and turned their focus to Africa, where they sought to outspend the USSR in hopes of making new friends in African governments.

Moyo points out three significant ways that the Marshall Plan differed from the African foreign aid that followed:

While Moyo is a fan of the Marshall Plan and views it as a successful foreign aid project, she is quick to point out that little critical attention has been paid to the drawbacks of the plan: "The idea that the Marshall Plan is hailed as a success has remained, to a large extent, unquestioned." For this, Moyo is to be commended, because even when it leads the reader to question her point of view, Moyo still makes it a point to address opposing arguments. It gives one the feeling that he is reading an author concerned not with her own argument or even assuaging some committee, but instead an author concerned with arriving at the truth.

She tells a story of decades of over-influential Western central planners (from Keynes to Milton Friedman). Reading the many horror stories reminds one of the axiom: "Power corrupts, absolute power corrupts absolutely." Western academicians probably should never have been permitted the influence over Africa that they were allowed to hold. Decade after decade, new methods of foreign aid are introduced, each relying on the same foundation of dependency on the West. As academic fads go in and out of style, Africa becomes the testing ground for them. Fundamentally, they are the same dependency inducing ideas with a new label, a new face.

At the same time, the aid brings with it an obsession with democracy, a governmental form that took European nations hundreds of year to grow into. That system, which was allowed time to grow into place in the West, is being shoe-horned into Africa. She attacks the holy cow of democracy and accepts that she might actually prefer a benevolent dictator because at least a benevolent dictator can and has brought about some of the promises that democracy has failed to provide: "…each of these dictators, [China, Indonesia, Korea, Malaysia, Singapore, Taiwan, Thailand, Pinochet's Chile, Fujimori's Peru], whatever their faults (and there were many), was able to ensure some semblance of property rights, functioning institutions, growth promoting economic policies…and an investment climate that buttressed growth – the things democracy promises to do. This is not to say that Pinochet's Chile was a great place to live, it does however, demonstrate that democracy is not the only route to economic triumph." A careful reader will notice the theme of property rights subtly mentioned in the book over and again. Property rights are a simple concept that many Westerners lightly take for granted while touting the benefits of short-term assistance.

As she analyzes problematic situations in the foreign aide equation, Moyo does not leave entertainers off without blame. We all know who they are. She blames Bono and other rock stars for silencing all meaningful debate. She criticizes Hollywood for being unthinkingly destructive with their influence. "We were just trying to help" is the kind of thinking that Moyo stands ready to denounce. Step back, try something different, please. She tells us. And if you won't do that, then just stop trying to help. "Were aid simply innocuous – just not doing what it claimed it would do – this book would not have been written. The problem is that aid is not benign – it's malignant. No longer part of the potential solution, it's part of the problem – in fact aid is the problem." Moyo tells how a well-intentioned Hollywood-inspired private donation of a million mosquito nets from America will, overnight, turn 150 people into beggars by inundating the local market for mosquito nets, thereby driving down demand and running a local producer of mosquito nets out of business. This forces his employees and their families to beg for food. Within five years, those million mosquito nets will be in useless tatters, and there will have been no added economic infrastructure developed to replace those mosquito nets.

What we are left with is a Rube Goldberg machine of foreign aid, as if it were built by a doctor whose modus operandi was to prescribed a cure and after realizing that he'd erred, instead of taking a patient off of the original medicine just kept adding treatment upon treatment to deal with the additional problems caused by the original cure and each successive treatment. As long as no other doctors see the patient, the patient and her family will perceive the doctor as hard working and brilliant. But in reality, an oppressive leviathan of treatment is slowly killing the patient.

Moyo calls for a different course from this point on, a course similar to the one the Chinese seem be taking in Africa – investing. She wants the goodwill to end, and wants the West to invest in Africa, ready to put trust in its people and hire them as workers, ready to trade with its businessmen, ready to mine her for her mineral wealth. She spends half the book making quite the convincing argument for how Westerners might be able to make a great deal of money investing in Africa.

If looking at this from a Marxist-influenced perspective everything Moyo is calling for could also be referred to as "exploitation." Exploit Africa, exploit her workers, exploit her natural resources. Do it. Once you're done, Africa will be a continent of strong, developed nations. Stop being guilty about Africa, and making her into nothing but a welfare queen. Yes, this is an African woman begging bleeding heart Westerners to stop seeing Africa through the soft bigotry of low expectations.

This book is the most damning argument against foreign altruism that I've ever read. She asks us to please stop doing good just for the sake of doing good. You only hurt people with that attitude, and you only benefit yourself and nurture your own ego. Well-intentioned meddling is still meddling.

The best time to plant a tree is twenty years ago. The second-best time is now.